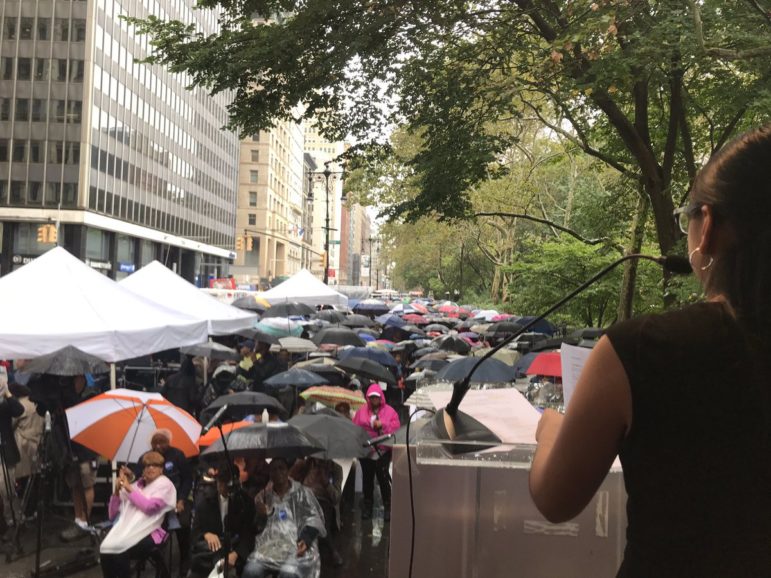 Dahlia Romero and thousands of others rally at City Hall on October 9, 2017.

Thousands marched in the rain to City Hall on Monday—and they weren’t there to protest Mayor de Blasio’s stance on Christopher Columbus.

Those rallying want the mayor to adopt two alternative housing proposals conceived by East Brooklyn Congregations and the Metropolitan Industrial Areas Foundation, faith-based organizations that have long been critical of the mayor’s housing approach. One calls for the rapid construction—within four years—of 15,000 units of senior housing on NYCHA and other city-owned lots and stresses the necessity of targeting low-income households. The other calls for a “top-to-bottom” rehabilitation of NYCHA over the same timeline.

Organizers says that about 6,000 people attended the rally. According to organizer Matthew Marienthal, the NYPD estimates that if the roads between Barclays Center and City Hall are packed with people, that would constitute about 5,000 attendees—and the march well exceeded that length, Marienthal said.

Tita from, Breukelen Houses “Mr. @NYCMayor , we are done BEGGING for @NYCHA to be fixed. You are out of time. The time to fix NYCHA is NOW.” pic.twitter.com/bWYZjBW9Fm

Fr. Mason: “We don’t just have dreams, we have concrete plans. @metroiafny, are you ready to build 15k new senior apts across our city?” pic.twitter.com/dVSnRQAlVl

The senior housing construction plan, which can be viewed here, offers tables detailing the costs of development (an estimated $3.83 billion for 15,000 units), the origins of financing (loans from the city’s pension fund, city subsidies, tax credit equity, and more), the proposed preference policy (existing NYCHA tenants get preference for half the new units), and the suggested affordability levels (out of 100 units, 45 for households making 40 percent Area Median Income, 25 percent for households making 50 percent of AMI, 22 percent for families making 60 percent AMI and 8 percent for households with Section 8 vouchers).

De Blasio also has a plan to construct affordable housing on NYCHA land, but under that approach, NYCHA residents will receive preference for only a quarter of the affordable units, and in some of the developments, half of the new apartments will be market-rate. De Blasio’s overall housing plan—to build or preserve 200,000 units in ten years—also includes a lower share of apartments for families making below 40 percent Area Median Income.

EBC and IAF have also proposed that the city finance NYCHA repairs by having the city absorb the cost NYCHA pays for water and other services ($185 million in 2016) and by using $40 million a year in “excess revenues from the Battery Park City Authority.” The group also wants a new construction authority, modeled on the School Construction Authority, to handle the rehabilitation, arguing that “NYCHA’s chronic inefficiencies and waste have demonstrated its inability to make significant capital repairs that this plan requires.”

According to a January press release, de Blasio has already invested $300 million of city funds over the past three years for roof repairs, $10 million for broadband, and $140 for security improvements. He has also waived tens of millions in NYPD and tax payments and dedicated $1 billion in the city budget over the next 10 years for more roof replacements, among other efforts—but those rallying today said the city must go farther.

As reported by Gotham Gazette, de Blasio has expressed concerns in recent weeks about funding a bigger affordable housing construction plan absent more state and federal funding, but promised during his East New York town hall to present a response to the group’s plan by Columbus Day. On Saturday, mayoral spokesperson Melissa Grace e-mailed Gotham Gazette, stating, “We are big supporters of building affordable housing, including senior housing on underutilized NYCHA property. We’ve taken that fight on across the city and welcome the organizing and partnership of this and any group pressing to deepen those efforts. We look forward to working together.”

Marienthal says they also received a response from the mayor on Saturday that affirmed the mayor’s commitment to ongoing partnerships and to his original plan, and have not received anything further.