Acting Out Their Demands, Advocates Take the Stage to Influence NYC Policy 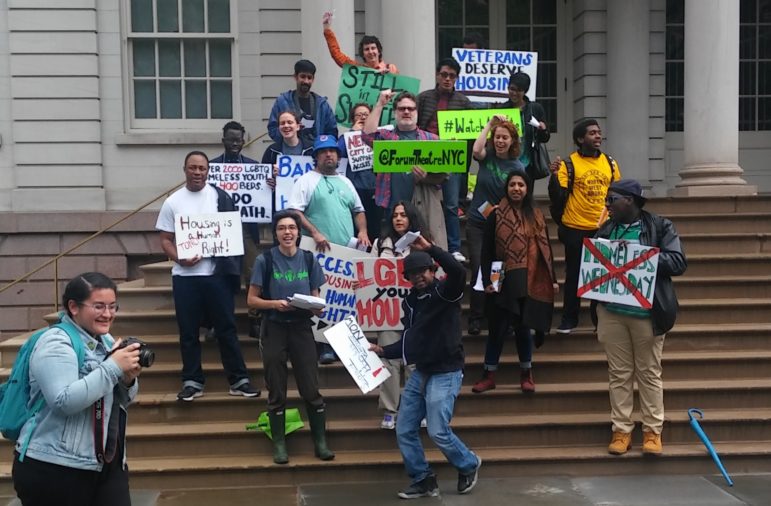 After their festival of legislative theatre, the actors took their case to City Hall.

It’s not often that those who have the experience of homelessness get to create laws that practically address their day-to-day struggles. Yet this May, LGBT youth and veterans who have experienced homelessness performed plays about their daily challenges, discussed the problems publicly with a community of people willing to listen and created legislation with lawmakers to potentially change their lives for the better.

Theatre of the Oppressed NYC is working to build political dialogue with local politicians through theater. Throughout the month of May, the organization has been bringing attention to the increasing problem of homelessness in the city using activist theater.

“It sort of turns some of the power dynamics upside down in terms of who’s on the stage and who gets to talk and who gets to propose legislation,” says Katy Rubin, executive director of Theatre of the Oppressed NYC. “That’s also important to us in terms of our ethics of how change should be sparked in the city.”

The methods Rubin uses to incite change are the techniques of Brazilian theater-maker and activist Augusto Boál and his Theater of the Oppressed. In the 1970’s Boál developed techniques to identify structural oppression and develop ways to create change. Legislative theater is one of those techniques.

Boál later founded The Center for the Theatre of the Oppressed and eventually held office as City Councilor of Rio de Janeiro. His work proposed 40 laws and he was able to get 13 of those laws passed.

In the United States, Boál’s techniques are taught in college-level theater programs throughout the country to students who aim to teach.

“I think that part of the reason we started Theater of the Oppressed NYC is because we felt that this tool was very powerful and was mostly being used as a training tool in the United States,” Rubin explains. “There was an opportunity to use this work as it was being used in other parts of the world to really organize with communities and lead advocacy and lead to change efforts from the perspective of communities facing the problem.”

The fourth year of the Legislative Theatre Festival, this year titled “Housing Circus” ran over four days. The first two days saw the use of legislative theater techniques.

Teams from the Ali Forney Center for LGBT homeless youth and The Fortune Society’s Reentry Veterans initiative created and performed plays showcasing the realities and challenges of the overburdened bureaucracy they deal with.

After the LGBT youth and Veterans performed, trained facilitators then opened the stage to spectators in the audience—or to use Theatre of the Oppressed official terms, “jokers” opened the stage to “spect-actors” who would act the play again. A spect-actor would replace one of the original performers and act out a solution to a central conflict.

With this new perspective, audience and actors discussed possibilities for policy that might ease the problems presented onstage. After a vote, the most popular ideas were presented to local legislators and policy advisers, who then pledged to potentially put some of that legislation into practice.

Among the issues that the festival brought to light was the age requirements to determine homeless youth status. Currently, the Runaway Homeless Youth Act provides services for youth aged 16 to 21. “We are calling for the age to group to be raise to 16 through 25,” said Skye Adrian, one of the youth performers from the Ali Forney Center at a press conference this week. “A person who is 21 through 24 has to go to an adult shelter and there is no LGBT specific tailored services at an adult shelter,” he said, indicating that an adult shelter might not be safe for LGBT people. “If you’re not safe in a shelter where else are you going to go?”

Another issue the festival highlighted is case management. “I think a relationship between a case manager and a client is the most important relationship when you’re [a homeless youth] because that is your new guardian,” Adrian says. “You don’t have anyone at home, you don’t have anyone on the street, so these persons are the persons you depend on.”

The group also advocates for the case managers to reflect the experiences of those they are managing. In the case of many of the LGBT performers, that would require case management by a queer person of color. “They definitely need to understand someone coming from their background to be able to help them through the system,” Adrian says.

Over the two days following the performance days of the Housing Circus, a “Policy Summit” was held where community members and activists gathered to plan next steps to push forward policies and activist workshops are organized.

The local festival is the most concrete use of the techniques in the United States, according to Professor Daphnie Sicre, who teaches public speaking at Borough of Manhattan Community College studied Theatre of the Oppressed with Boál shortly before he died. Sicre applauds Theatre of the Oppressed NYC for putting legislative theatre into practice in a country that might not be as open to the process.
“This is not the type of theater that anyone I’ve known of has kicked butt [with],” Sicre says, “I think that for Americans, they’re doing a really good job with it.”

Sicre finds inherent weakness in the lack of political diversity of people participating in festivals like Housing Circus – the people who might most benefit from witnessing Theatre of the Oppressed are least likely to participate. But she thinks that it’s still potentially effective. “You’re not going to have a Trump supporter doing Legislative Theatre, it’s just not going to happen,” she says. “But I could see Bernie Sanders seeing this and saying, ‘Holy s—t, this is awesome.'”

Rubin says the value of the process is apparent to those who take part in it.

“I think [the process is] easy to disregard,” says Rubin. “It’s not a way that people are used to making change. So that’s easy for people to think ‘Why is this useful to [me]?’ I think once they’ve been [to an event] they’re really excited about it.”

One of the legislators that Theatre of the Oppressed NYC works closely with is Councilmember Carlos Menchaca, of the 38th district in Brooklyn.

“I believe strongly in providing opportunities for young people to voice concerns through non-violent, creative mediums,” Menchaca said in a statement. “Theater is an ideal medium – and TONYC, in particular, has a history of engaging marginalized populations and creating spaces where the voices of these individuals can be heard and amplified,” he said.

In addition to amplifying voices, Menchaca sees the development of a civic-minded youth in this work.

“Through political theater, young participants explore the arts while developing their political identities – which, collectively, empowers them and their audiences to become change makers in their communities,” he said.

The process has already inspired change in the region.

Samuel Miller, a senior management analyst for the federal Department of Housing and Urban Development has been working with Rubin and the theater since 2013 when HUD was invited by the group to dialogue with the Department of Justice about policy regarding LGBT violence on the Upper East Side.

Miller attended to talk about what federal funding was available to the non-profits that served LGBT youth. “Germinating out of that initial collaboration, we ended up creating what we call now the Federal Interagency Working Group for Homeless and LGBT Youth,” Miller says. “From [2013] on out we have maintained a continuous working relationship [with Theatre of the Oppressed NYC] and really engaged our fellow partners involvement in runaway and homeless LGBT youth.”

Theatre of the Oppressed NYC will also continue to work with the legislators involved with the Housing Circus through the end of May and hosted a press conference on the steps of City Hall on May 24 to speak about the three policies that emerged from the festival this year and call their introduction to the City Council.

“This is just another tool [for activism] but it is a fun and creative one in which other people want to be engaged,” Rubin says. [This] is something that we find that is very important in activism and social change—something that is fun and engaging to the larger community.”

One thought on “Acting Out Their Demands, Advocates Take the Stage to Influence NYC Policy”