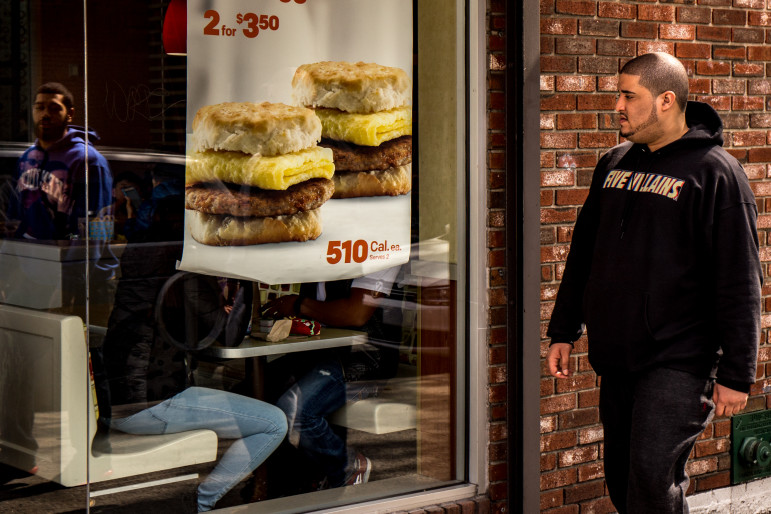 Human decision-making, especially when it comes to food, is complex. Many things, conscious and less so, factor in to what, how, when, where and how much we eat. One Cornell study found that the order in which buffet foods were laid out dictated how much people ate of which dish (two-thirds of your plate is filled with the first three items you encounter), while a study from the University of Illinois found that when groups of people eat together at a restaurant, they tend to select items from the same menu categories. Another Cornell study found when the lighting was softer and the music was playing, people not only ate fewer calories but reported enjoying their food more.

Because there are so many known and unknown quantities at play, it’s particularly difficult for policy makers to change eating habits. That’s a hurdle for policymakers who want to reduce obesity and other diet-related illnesses.

One measure to combat obesity was recently adopted nationwide as a provision in the Affordable Care Act. As of 2016, chain restaurants with 20 or more stores will have to display the number of calories in each menu item along with the price.

It sounds like a good deterrent—surely the information that your total meal is going to amount to the same calories you should be eating all day would nudge consumers to make better choices.

But do calorie counts actually work?

Calorie counting actually originated in New York City, where policymakers fought and won a long and drawn out legal battle against the restaurant industry. As part of what some skeptics derided the “Nanny Bloomberg” era that included attempts to ban the of large sodas in some settings, New York City’s Department of Health came up with the idea that forcing restaurants to post the number of calories in their dishes would help consumers make more informed choices and ultimately lead to them consume fewer calories.

“The lack of readily available calorie information in food service establishments makes it easy to consume too many calories without realizing it,” stated the New York City Health Department. “The new requirement will help enable customers to see this information at the point of purchase, where it can help them make more informed choices.”

The rule did not go over well; the restaurant industry opposed it heartily. In a fight that took two years, the New York State Restaurant Association (NYSRA) sued twice to prevent it, supported by the likes of McDonald’s, Burger King, KFC, Pizza Hut, Taco Bell, Domino’s Pizza, Dunkin’ Brands, and T.G.I. Friday’s. According to a paper published in Health Affairs, the restaurant industry argued that the labels were unconstitutional; they violated the First Amendment, which protects free speech but also protects individuals from being forced to say things they don’t want to. The NYSRA argued that requiring restaurants to post the words “100 calories” was forcing them to express an opinion. In the second suit, U.S. District Judge Richard J. Holwell sided with the city, which argued that “100 calories” was fact, not opinion, and the rule became law. As of April 2008, any chain with at least 15 outlets nationwide would have to display calorie counts on menu boards, menus or food tags in New York City, with “a size and type-face as least as large as the name of the menu item or the price.” The rules would affect about 2,000 restaurants, 10 percent of the 23,000 in the city. Most chains waited until the day that fines began to be levied to post the information.

But among the questions posted by the City’s Department of Health, such as “What is a menu item?” and “Where must I post calorie information?” one was absent: Do calorie counters make a difference? Both the restaurateurs opposing the rule and the Department of Health imposing it seemed to agree the answer was yes; in 2008, a spokesman for the association told the New York Times that the judge’s ruling would cause “irreparable harm.”

But the restaurateurs needn’t have worried. In fact, studies have shown that calorie counts affect consumers modestly, if at all.

Six years into the mandate to post calorie counts in chain restaurants, researchers at NYU Langone Medical Center found last year that calorie labels on their own failed to reduce the overall number of calories that consumers of fast food ordered. “There were no statistically significant changes over time in levels of calories or other nutrients purchased or in the frequency of visits to fast-food restaurants,” the study concluded. “Menu labeling at fast-food chain restaurants, which the Affordable Care Act requires to be implemented nationwide in 2016, remains an unproven strategy for improving the nutritional quality of consumer food choices at the population level.”

Another study found that introducing calorie numbers had no affect at all on the number of calories purchased from vending machines before and after their owners posted calories. Another study analyzed data from 1,156 receipts of food purchased in New York City and Newark. The researchers found that even though the calorie information had been posted, there was no measurable difference in the number of calories consumed, even though half of the respondents reported noticing the calorie information. Only a quarter of respondents said that the information posted influenced their food choices.

Perhaps even more damningly, people were wrong about whether they had in fact been influenced by the counts. “Even those who indicated that the calorie information influenced their food choices did not actually purchase fewer calories according to our data collection,” states the study. “We found that 27.7 percent who saw calorie labeling in New York said the information influenced their choices. However, we did not detect a change in calories purchased after the introduction of calorie labeling.” Another study found that consumers continually underestimate the calorie count of restaurant entrees, by over 600 calories.

Why doesn’t knowing that a cheeseburger is 2,000 calories affect a person’s choice of that item? “Calorie information is like going to a foreign country and not knowing what their currency is worth,” says Charles Platkin, professor at Hunter College in NYC, City University of New York School of Public Health, and author of the vending machine study. “It’s a reference point. What is 300 calories? What does it mean?” In other words, the whole concept of what is a calorie—and how many we should be consuming daily—is still pretty mystifying. Just posting a number doesn’t do much towards fostering understanding—let alone changing behavior.

Tom Freiden, Director of the U.S. Centers for Disease Control and Prevention (CDC), who was at the time the City’s Health Commissioner and pushed for the program, did not respond to requests for comment. But a spokesperson for the New York Department of Health and Mental Hygiene wrote in an email, “Calorie labeling provides important information that consumers deserve and that when used, can help consumers make healthier choices.”

About the NYU study showing that calorie counters don’t change behavior, the spokesperson said, “The study confirms that people who eat in fast food restaurants with calorie labeling are more likely to be aware of caloric intake and order food with fewer calories than people who eat in restaurants without calorie counts. Educating consumers works, and remains an important way to help people live healthier lives.”

Still, the fact that calorie counts haven’t directly influenced our purchasing habits is not necessarily a condemnation of the program. “It creates awareness for the population, something to talk about,” Platkin says. “It also impacts policy makers; they are thinking about calories and other policies to help people choose better, eat more fruits and vegetables.” It might even affect the restaurants, who may hesitate to put 2,000-calorie items on a board, catalyzing them to look for other, healthier options.

“This is one step in a process of how we make better and healthier choices,” Platkin concludes. “This is a topic that needs more attention. Hopefully it won’t end here.”