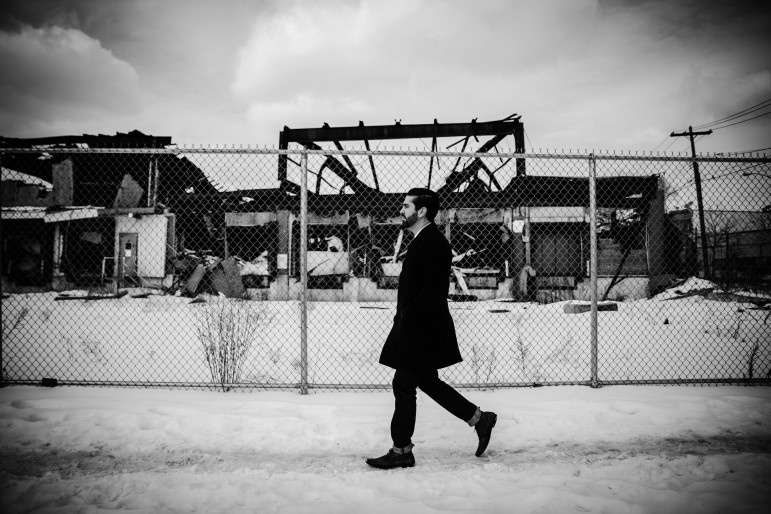 Councilmember Rafael Espinal walks along Atlantic Avenue in his district, which includes areas to be rezoned under the administration's East New York plan.

With mandatory inclusionary housing now law, all eyes are turning to East New York, the first neighborhood in the city targeted by Mayor de Blasio for a rezoning. While local community groups remain wary of large-scale displacement, East New York Councilmember Rafael Espinal is hopeful he will reach a satisfactory compromise with the mayor.

“There was a little frustration earlier [last week] because time is ticking, but the administration and myself have had very good talks in the past day or two, and we look forward to having a productive conversation in the coming weeks,” said the councilmember on Friday.

Throughout the negotiations process, Espinal, just over 30, has repeatedly emphasized his roots in the long-neglected neighborhood and his personal stakes in the protection of native residents. A lifelong resident of Cypress Hills, he is the child of Dominican immigrants and union workers who began his career teaching adult literacy in East Brooklyn. But unlike East New York’s other councilmember, Inez Barron, who voted against the mandatory inclusionary housing amendment last week, Espinal has avoided outright condemnation of the city’s affordable housing plan.

The subcommittee on zoning postponed a meeting scheduled for Monday April 4 by two weeks, acknowledging the city would need to negotiate with Espinal before the Council moves forward.

One of Espinal’s top priorities is ensuring the city can fulfill its promise that 50 percent of the new units will be affordable to neighborhood residents. At a March hearing, the administration admitted that beyond the 1,200 units they have arranged to subsidize, they cannot promise how many future units will be affordable beyond the 25 percent required by mandatory inclusionary housing. That total will depend on developers agreeing to accept city subsidies. Espinal is identifying public sites in the neighborhood not included in the plan, and wants city commitments to develop those sites with 100 percent affordable housing.

The councilmember also hopes to reach deeper levels of affordability by increasing the percentage of units for households making below 30 percent AMI in city-subsidized projects, and adding the new Mandatory Inclusionary Housing option, which requires 20 percent affordable units at 40 percent AMI. Responding to a community concern about lack of protections for small homeowners, he’s interested in a pilot program to legalize basement units.

Espinal has a number of other asks as well, including the preservation of manufacturing land, a study of school capacity and repair needs, and a detailed list of capital commitments and timelines for the city’s proposed upgrades to street and park improvements. In an effort to codify accountability measures for future rezoning neighborhoods, he and others introduced a bill last week to establish a publically accessible online database where the city is required to publish its commitments to each rezoning neighborhood.

While Espinal keeps the heat on the mayor, some East New York community groups are keeping the heat on the councilmember. On Wednesday, New York City Communities for Change released a report entitled “Educating Espinal,” demanding that 50 percent of the new units are affordable to families making less than 40 percent AMI. Meanwhile, the Coalition for Community Advancement continues to call for the adoption of their alternative plan, which would create a special district to ensure sufficient infrastructure development and create a $15 million small homes preservation fund, among other strategies.

“I believe the Coalition created a plan that would be best fit for East New York but in reality I don’t believe we can meet all those expectations,” says Espinal. “We have to make sure we have a mechanism in place that would ensure that East New York continues to keep the true character of the community while also improving.”

Asked to comment on negotiations, a representative from City Hall said, “We have been in talks with Council Member Espinal and Council staff about East New York on a daily basis, and will continue to do so as we work together on a plan that meets this neighborhood’s needs.”