Bushwick Developer Sells Out, Takes Housing Promises With Him 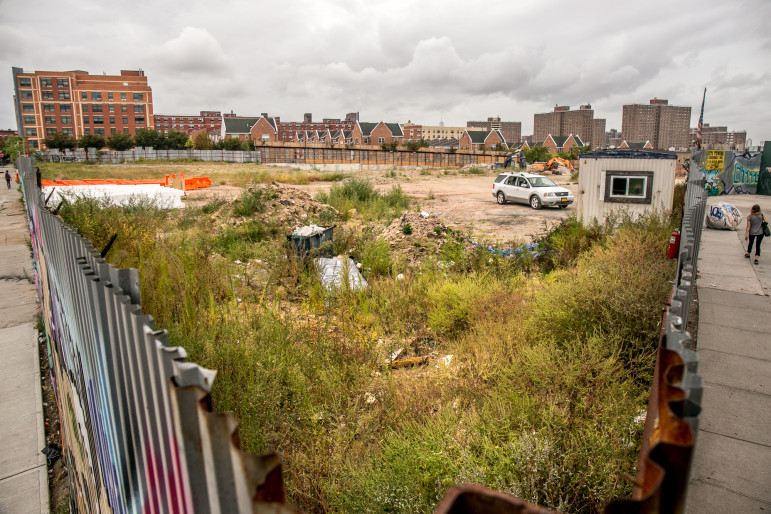 The Rheingold site, seen from the corner of Melrose street and Evergreen avenue.

When Bushwick community groups announced in January 2014 that Read Properties, owners of the long-derelict Rheingold Brewery site along Flushing Avenue, had agreed to build as many as 200 units of affordable housing as part of the city’s rezoning of the site for high-rise apartments, there was much rejoicing.

“We thought we were done, more or less, on the campaign, and that we were going to watchdog: Did they get the money on time, did they adhere to the construction guidelines as far as not keeping up people at night,” says Bruno Daniel, chair of the Rheingold Construction Committee, the coalition assembled by neighborhood groups to oversee the affordable-housing plan’s implementation.

Instead, nearly two years later, the agreement is in disarray, and community activists are left trying to pick up the pieces. Just a few months after the community benefits deal was signed and the Rheingold site rezoned for apartment towers, Read sold part of the property for $53 million to another Brooklyn developer, Simon Dushinsky’s Rabsky Group, which would not commit to meeting the same affordable-housing numbers.

And now the other shoe has dropped: According to both the office of Councilmember Antonio Reynoso and the community-organized Rheingold Construction Committee, Read has told them that it has now sold off the rest of the land to yet another Brooklyn developer named Joel Goldman. And Goldman won’t even answer the group’s phone calls. After their long effort to ensure that new development include at least some genuinely affordable housing, the group feels is it almost back to square one.

“The planning process, the ULURP process, is just broken,” says Daniel. “The whole problem is that there’s nothing enforceable in the process. There’s nothing that has any teeth to it. “

For visitors to Bushwick’s northwestern edge along Flushing Avenue, there’s no missing the old Rheingold site. Home to one of the neighborhood’s landmark breweries until the building was closed in 1976 and demolished five years later, the multi-block parcel is now just a pair of trash-strewn lots on either side of a featureless two-story warehouse put up in 1987. In short, it screams “ripe for development,” especially with trendy restaurants like Roberta’s and Northeast Kingdom springing up on both sides as the neighborhood’s fast-forwarded gentrification continues.

Housing development in Bushwick has been especially heated in recent years, thanks to chaos of neighborhood politics. For decades, the local political scene was dominated by Vito Lopez, the social worker-turned-state assemblymember whose fingerprints were on almost every public project in the neighborhood for the better part of four decades. (One of the last projects built by the Lopez-affiliated Ridgewood Bushwick Senior Citizens Council is Rheingold Gardens and Renaissance Estates, a mixed-income collection of high-rise apartments and two-family townhouses that sits adjacent to the Rheingold site.) When Lopez faced sexual harassment accusations in 2010, charges that would ultimately force him from office three years later, it left a power vacuum that has been slow to fill.

That’s why, after developer Read Property sought city approval in 2010 to build high-rise apartment buildings on the Rheingold site, the newly formed North West Bushwick Community Group joined with Los Sures and Churches United for Fair Housing, two groups from neighboring Southside Williamsburg, and other local organizers to try to secure promises that any new buildings would include below-market units and other benefits for existing residents. And after a grueling city land-use process, the neighborhood groups seemed to have succeeded early last year when, simultaneous with the city approving the site’s rezoning, Read signed a memorandum of understanding agreeing to most of the community group’s demands: The developer promised to offer 20 percent of its rental units at rates less than half the market rate, and half of those to current residents of Community Board 4 currently earning 60 percent or less of Area Median Income (or about $30,000 a year for a family of four). Read also promised to donate $250,000 to a fund for displaced residents, $350,000 for local park improvements, and $360,000 for new computer labs at area public schools, among other concessions.

The celebrations, though, were short-lived. Several months later, community members learned from the real-estate press that Read had sold part of its parcel to Rabsky. And while Rabsky execs have declared their commitment to affordable housing in principle, they’ve steadfastly declined either to put that in writing or to meet with the groups that negotiated the agreement with Read. Most recently, Rabsky sent a letter to Reynoso’s office — delivered, not coincidentally, during a heated town meeting on the project on July 31 that led to a march and “campout” at the site by community residents — affirming that “affordable housing is part of the development that will be built,” but without committing to any particular number of affordable units or defining “affordable.”

Now the coalition faces dealing with a second new developer for the Rheingold site. Goldman, another major player in Brooklyn real estate, has not responded to queries from either the coalition or City Limits, including those asking if he could confirm or deny his purchase of the Rheingold land.

Whether the new owners call them or not, there is little the Bushwick groups can do now to hold them to the original Read agreement, since it was tied to the developer, not the land. “That’s how it always is” with affordable housing side deals, says Reynoso policy analyst Asher Freeman. “The only way you can really get a guarantee is if there’s some city subsidy attached to it that they’re taking.”

The prospect of city subsidies, in fact, provides some hope that the new Rheingold owners could still choose to include affordable units — though it may not end up being an “affordable” that local residents can afford. The main city subsidy available to developers has been the controversial 421-a program, which in hot areas like Bushwick (those designated as part of the law’s Geographic Exclusion Area) has required the construction of affordable units if developers want a full 25-year tax break.

The 421-a program was rewritten in June, however, and according to Association for Neighborhood and Housing Development planning director Moses Gates, the new law could provide an out for the Rheingold site owners. “The thing that’s not being reported that’s really annoying about the new 421-a law is in neighborhoods like Bushwick especially, it’s going to be more profitable for developers to do the 30 percent at 130 percent AMI option” — a new alternative that allows developers to get tax breaks for building a larger number of affordable units, but at less affordable prices. Rents at 130 percent of area median income, he notes, could run as high as $2000 a month for a two-bedroom apartment — “in that area, it’s not terribly far off market.”

This quandary is one reason why some affordable-housing advocates — including Mayor Bill de Blasio — have seized upon mandatory inclusionary zoning, a proposal that would require any developers to build some affordable units as part of any rezoning. The mayor’s inclusionary zoning proposal, which would require between 25 and 30 percent of all apartments built in a rezoned neighborhood to be affordable — the number varies depending on whether “affordable” is defined as 60 or 80 percent of Area Median Income — recently entered the city’s land-use review process and is currently on schedule for a Council vote next spring.

If the mayor’s plan is approved, the big question will then be whether any developers bite. “Mandatory inclusionary zoning might be a permanent fix, but it works only if developers decide to build,” says Hunter College urban affairs professor and zoning guru Tom Angotti. An NYU Furman Center study earlier this year projected that developers would be willing to provide as much as 28 percent affordable units in high-demand areas like downtown Brooklyn. But downtown Brooklyn was already rezoned for high-rise development in 2004 — and in areas yet to be upzoned, like East New York and along Jerome Avenue in the Bronx, the report predicted that “no amount of additional zoning density is likely to spur new development without additional subsidy.”

In the meantime, any affordable-housing side agreements are only as strong as a developer’s commitment to actually build on the rezoned property, and not simply flip the land to a new owner who can build with no strings attached. Freeman declines to speculate on whether Read had this in mind all along, but acknowledges it’s a reasonable question to raise: “You have to question when they sell the entire property within two years of receiving the rezoning what their intent was.” (Read Property officials did not reply to City Limits’ requests for comment.)

For now, the Rheingold Construction Committee is working to increase awareness of the new developers’ unwillingness to meet to discuss affordable housing, in hopes that public pressure can shame Rabsky and Goldman into living up to at least part of the original agreement. (Or at least some of the donations to schools and other community needs, most of which remain unpaid, according And at least one affordable project may still go forward: As part of the agreement, Read carved out a portion of the site to give to Los Sures for construction of an affordable senior-housing project; a Los Sures spokesperson said they’re currently working on securing funding for the project, and don’t have a firm timetable on when construction will begin.

Community leaders, meanwhile, are starting to see the Rheingold fight as part of a bigger battle. “This is our land-use process that we have at the moment, where there are these handshake agreements, and nonbinding letters signed, and we’re totally dependent on that to deliver community agreements — and they’re obviously not very effective,” says Freeman. “So I think it does undermine our land use process to a certain extent when we can’t hold developers accountable.”

5 thoughts on “Bushwick Developer Sells Out, Takes Housing Promises With Him”