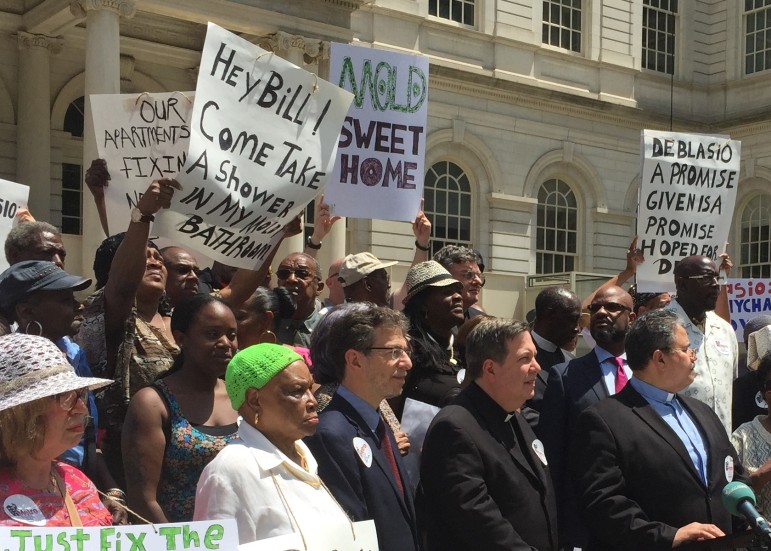 Angry residents and faith leaders joined forces Thursday to call for the resignation of Shola Olatoye, chairwoman of New York City Housing Authority (NYCHA). On the steps of City Hall under a bright sun, hundreds of members of Metro Industrial Areas Foundation called for a “shake up” at NYCHA, demanding that Mayor de Blasio keep his promises to New York City’s most vulnerable population.

But the sudden call for Olatoye’s ouster was met with a zealous defense of the chairwoman by at least one frequent NYCHA critic.

Pia Benton, who lives in Breukelen Houses, says she came out to protest the lack of repairs and the lack of accountability at public housing. The Authority’s claims that response times have been getting shorter str false, Benton told City Limits. When she called in with a plumbing issue in January, she was given a May date for repairs. “I’m like, ‘You mean May, four months from now May?!'” Benton remembers saying in surprise. “‘I don’t have any water in my kitchen sink!'”

Benton joins the call for Olatoye to step down. “I believe they have set her up for failure,” she said of the de Blasio administration. “They knew the situation they brought her into and they’re not giving her any support, any money, any backing to get it done. Her hands are tied. She should just cut her losses and go.”

The case for an ouster

Why call for Ms. Olayote’s stepping down, if it’s the mayor who’s failing to support her? “We need to cut out the middle man,” Benton said. “Anything going forth is between us and [the mayor]. He’s not being made accountable for anything, and she’s being thrown under the bus.”

Others agreed that Olatoye was more a victim of circumstance than the cause of NYCHA’s problems. “It’s not towards her,” Caroline Chisolm, who lives in Louis H. Pink Houses in Brooklyn, agreed. “We’re not attacking her.”

“I think she should step down,” said Linda Lee James Gaskin, who lives in Crown Heights and used to live in public housing. “A lot of stuff is happening and she is just caught in the middle. It’s better if she steps down. It’s nothing against her.”

The speakers’ ire, too, seemed reserved for the mayor, who they felt had made false promises while campaigning, and who they accused of being all talk and no action. But while they were calling for a shake up in leadership and the dismissal of Olatoye, it was with mixed feelings.

“Yes, [the Mayor] appointed a smart, decent chairperson, Ms. Shola Olatoye,” Reverend David Brawley, pastor of St. Paul’s Baptist Church in Brooklyn, said in his remarks. “But then, he failed to offer the money and the support she needed to be successful.” Chair Olatoye has been “respectful. She has been accessible, but that’s not been enough to get the mold out of our apartments,” he added. (Brawley and Rev. Francis Skelly also made the case in a Daily News op-ed.)

“During the election, I hosted all of the mayoral candidates, including Bill de Blasio, at my church,” Reverend Brawley told the vigorous crowd. “And in the sanctuary of my church, then-candidate Bill de Blasio promised to become mayor of NYCHA. In front of 1,200 people, he made a commitment.” But with mold, disrepair, leaks, and dirt, the mayor has failed to live up to his promises. Mayor de Blasio seems to be “more interested in his national image,” Brawley went on. “He told people he was leading a progressive revolution, while forgetting to lead the city he left behind.”

Specific complaints included the fact that less than 35 percent of repairs are being completed, according to Brawley. Also, the court settlement to eradicate mold and moisture is being ignored while mold continues to grow.

Brawley’s demands included the mayor inserting himself directly into NYCHA’s management. “If he believes Ms. Olatoye is not to be trusted with this job, then he should find somebody he does trust or he should do it himself,” Rawley said to much applause.

As for the mayor’s plan, NextGeneration NYCHA, speakers and attendees alike were unimpressed, viewing it as a future-oriented plan, when NYCHA stands in crisis now.

Within his first months in office, de Blasio began scaling back annual payments NYCHA had long been forced to make for police services—charges that had long irked public housing advocates and exacerbated the Authority’s dismal fiscal situation. This year he increased those rebates to $100 million. The city committed $300 million in capital funding for NYCHA repairs over three years. And, despite the de Blasio-Cuomo tension that has so often stopped Albany from stepping in to help the city, the state also committed $100 million to NYCHA repairs this year.

For her part, Olatoye led a year-long outreach campaign around NextGen NYCHA, a plan that actually combines future development with near-term changes to NYCHA management and billing. She also oversaw the controversial and complicated sale of a portfolio of project-based Section 8 buildings to a consortium controlled by the authority and private investors—a move that should improve the authority’s balance sheet.

David Jones, the president and CEO of the Community Service Society, said the calls for Olatoye’s ouster were “out of order” and “fail to take into account the dire state of public housing when she took charge a year ago and the changes that have occurred under her watch.”Jones said the chairwoman deserved credit for “engaging residents in the planning of their communities and rebuilding trust” and for her role in “a major tectonic shift away from exclusive reliance on Washington”and toward more city responsibility for NYCHA.

“While continuing resident complaints about the pace of repairs are justified, independent indicators suggest that by 2014, the accelerating deterioration observed since 2008 leveled off,” Jones added.

Late Thursday, NYCHA sent a statement from Olatoye that read, “NYCHA is changing the way we do business at every level. While we’ve made progress, we recognize there is much more work to be done. Since becoming Chair, I’ve met with hundreds of residents and community organizations, and worked closely with the mayor to propose fundamental changes at NYCHA to preserve the future of public housing for our city.”

The statement did not respond directly to the call for Olatoye to leave her post, but added: “In our commitment to run a more transparent and accountable NYCHA, I will continue to use every tool at our disposal and seek real solutions to improve the service levels and quality of life for all of our residents.”