An Organizer Speaks: Why We’re Calling Up a Tenants’ Army 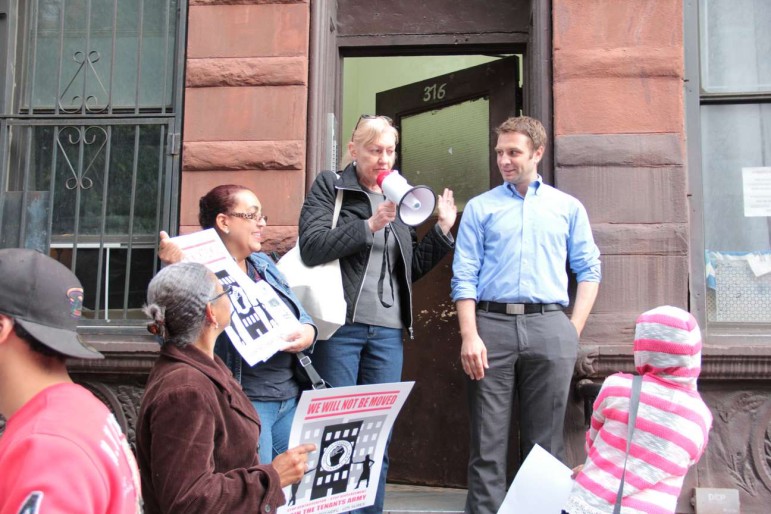 'Some folks erroneously think that only minorities are threatened in Williamsburg, but that is not the case. Recently, our team at Southside United HDFC-Los Sures was able to help a white male tenant who was being overcharged. '

I was born and raised in Williamsburg, Brooklyn. I lived here during the hard times. I remember when the owner of four buildings used to sneak into the basement and shut off heat and other services. I remember how one time his tenants caught him and chased him and brought him back to turn the services on. I remember walking down South 2nd Street and wondering why there was a long line of people waiting outside of a door. They were in line to buy illegal drugs.

I have seen this neighborhood change through the hard work of its people. It’s accepted as true that artists came and the neighborhood suddenly changed, but that’s not the case. It took a lot of effort from community residents and activists to turn this neighborhood around. You could say that we are now victims of our own success as gentrification is taking its toll on those who fought for this community.

We welcome new residents in Williamsburg. We love the cultural diversity of Williamsburg and we want it to keep growing—just not at the expense of those who raised their families here, those who have called this neighborhood home for decades.

Unscrupulous landlords and speculators are going out of their way to force low-income families out of their rent-stabilized apartments; to force small businesses out. We’ve seen our neighbors leave and we have seen our neighbor’s businesses leave. We’ve even seen educational institutions for our children shuttered or threatened as landlords try to make way for luxury residences.

Recently, we heard about the Israel brothers, who were charged for unlawful evictions and for allegedly forcing tenants out of their homes by destroying their apartments and making them uninhabitable. These are real, tangible attacks. We are no longer experiencing simple gentrification—not when landlords are gambling their freedom to displace low-income tenants and collect significantly higher market-rate rents.

How do we stop these attacks? We educate and organize the entire community, both long-established and new tenants alike. A Tenants Army can make it happen.

We need an army of tenants that can educate the public on the various strategies that landlords are using to displace tenants. For example, landlords are offering tenants money to move out of their apartments. For low-income tenants, these offers seem too good to pass up. But they do not realize that these amounts actually will not last them very long, and that they end up getting stuck paying much higher rents and usually not in their own neighborhoods.

We also cannot overlook the power of tenant associations. An army of tenants would make sure every building with rent-stabilized tenants has one. One clear example comes from tenant leader Aracelis Castillo, who came to us saying that her landlord would not make any repairs in her building; that if tenants wanted any repairs they would have to pay for it themselves. Once we educated the tenants at her building and helped them to create a tenants association, they were able to document all of the repairs needed and have so far seen an “80 percent improvement” as they call it.

We envision these tenant leaders to come from all backgrounds of life with one goal: fairness in housing.

Some folks erroneously think that only minorities are threatened in Williamsburg, but that is not the case. Recently, our team at Southside United HDFC-Los Sures was able to help a white male tenant who was being overcharged. The initial complaint that we filed with State Division of Housing and Community Renewal (DHCR) took place in 2009. DHCR finally ruled in his favor this year, saying that he is owed $104,000 in rent overcharges, including treble charges. We know this gentleman is going to be a leader in our army. He knows that with the right knowledge and effort, we can prevail.

We are also working with a building where almost all of the apartments are occupied with white families. Their landlord is not providing them with services. We need an army of tenants who will help all tenants regardless of race or creed.

We need an army of tenants who will continue fighting as threats and challenges arise; a group of community members who on a moment’s notice can organize and fight for the rights of tenants.

“We shall not be moved.” That is our battle cry. We love this neighborhood. Our families live here. We shouldn’t have to move to make others rich. We want to take back what is rightfully ours and preserve affordable housing not only for those of us who have been here but for those that have moved here into legal rent-stabilized apartments and wish to continue to add to—instead of subtract from—this community.

One thought on “An Organizer Speaks: Why We’re Calling Up a Tenants’ Army”