UrbaNerd: Really, it’s OK if You Don’t Understand 421-a 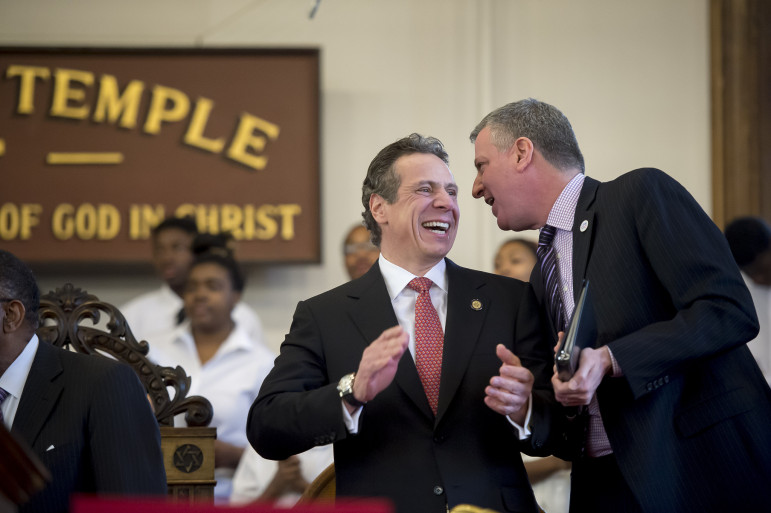 Rob Bennett for the Office of Mayor Bill de Blasio

Gov. Cuomo and Mayor de Blasio chuckling in a February 2014 photo. Their disagreement over 421-a has been less hilarious.

Several months ago when the dual deadlines for the expiration of rent regulations and the 421-a loomed on the horizon, it was unclear whether their fates would get bundled into a grand (or not so grand) compromise.

Now, that seems to be exactly the ending to which Albany is lurching six days before both programs expire on June 15. Over the weekend, Mayor de Blasio said if rent regulations weren’t strengthened and 421-a reformed in the manner he has proposed, the tax break should end.

Most of us understand roughly what 421-a is—a property tax break on multi-unit residential buildings started when the city was desperate for any kind of development and tweaked over the years to try to encourage affordable housing.

And the critique of 421-a—that it costs the city too much in foregone tax revenue and produces too few units of affordable housing—is well known. So is the developers’ rebuttal: that without 421-a, a lot of residential projects would never be built, costing the city market-rate units and the economic activity generated when they’re built.

But if you (like a certain journalist who’s covered this issue for years with shamefully little fluency in the nitty-gritty details of the policy) are a little fuzzy on the particulars of 421-a, here are some tools for understanding the debate that’s dominating state politics as we speak:

1) Why is it called 421-a? Because that’s the section of the state’s Real Property Tax Law that established the exemption.

2) When did it begin? It was first passed in 1971, then updated to include affordability provisions in 1984. There was another set of changes over the 2006-2008 period meant to increase the affordability impact.

3) How much does it cost? In fiscal 2015, the city tallied $1.1 billion in foregone property taxes on the 62,000 properties that received the benefit. Getting a 421-a exemption doesn’t mean a property pays no taxes; it means they are exempt from paying some or all of the taxes resulting from improvements they make to the property. The amount of the exemption shrinks over time and, in some cases, the 421-a break only applies to some of the increased value: If the property value goes above that cap, the owner pays taxes on the excess.

5) What’s the Geographic Exclusion Area? This is the part of the city where getting 421-a benefits requires that you provide affordable housing. The area was expanded as part of the 2006-2008 reforms to cover the entirety of Manhattan, large swaths of northern Brooklyn, parts of western Queens, the northern strip of Staten Island and a couple chunks of the central Bronx. Here’s a map.

6) How long does the tax benefit last? Developers who get the 421-a break are spared property taxes during a construction period of up to three years. Then there’s a period of full exemption, followed by years in which the exemption tapers down (see page 2 here for the tapering schedules). The total length of the 421-a exemption depends on where the building is and whether it offers affordable housing:

7) What does “affordable” mean? Buildings that get 421-a benefits based on the provision of affordable units have to set aside 20 percent of units as affordable. That typically means that they can be rented by families with incomes at 60 percent of Area Median Income, or $51,780 for a family of four. Some developments receiving substantial subsidies can aim for a broader income range, from 30 percent to 120 percent of AMI but they can’t average more than 90 percent of AMI, according to a report by the Manhattan borough president’s office.

8) How many affordable housing units has the program created? This is hard to pin down. One estimate, generated by ANHD, an organization that has sharply criticized the program, is that roughly 13,000 of the 153,000 units currently subsidized by 421-a were subject to affordability restrictions.

9) How can I find out if my building is covered by a 421-a exemption? Read this.

10) What are the reform proposals for 421-a? There are a few versions floating around:

And keep in mind, some critics want to see the program ended entirely because they view it as unsalvageable.