Your ‘One New York’ Cheat Sheet 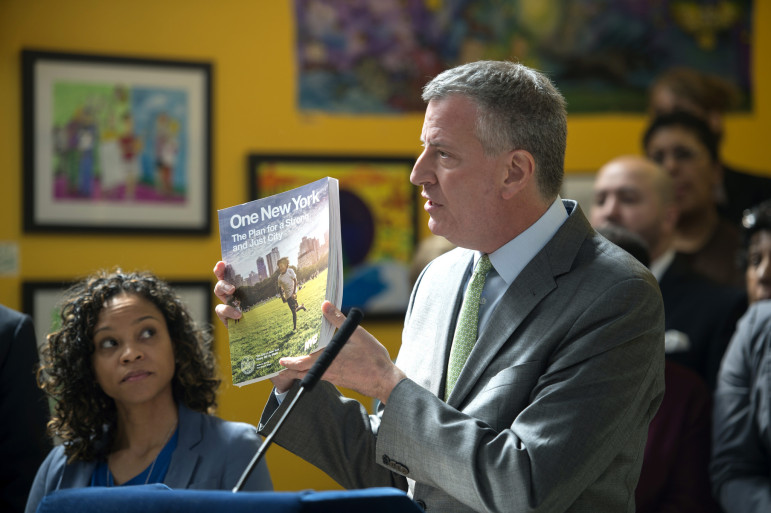 The OneNYC vision issued by Mayor de Blasio yesterday is worth a read. But it won’t be a quickie. Its 332 pages are packed with detail and ideas that, the mayor hopes at least, we’ll all be spending the next 10 to 25 years talking about. To help you keep up with water-cooler conversations about it, here’s a condensed, Q&A version of what you most need to know.

Q: Where can I read the proposal?

A: The de Blasio administration has a slick and snazzy website for understanding the context of the effot and its broad ideas. The proposal itself is here.

A: “This plan is our roadmap that will preserve and enhance New York City’s role as a leading global city. As with past iterations of this report, we focus on economic growth, sustainability, and resiliency. But we also seek to address issues of equity for our residents—because we must serve all New Yorkers.”

A: Not in the strict sense, in that it doesn’t specify locations, a timetable, or budget for every idea conceived it it. By those same measures, PlaNYC wasn’t a plan either. But it certainly is a detailed look at the policies the administration plans to implement or seek and the logic behind each.

Q: How does this tie in with PlaNYC?
A: Basically, the administration frames OneNYC as a much broader successor to PlaNYC. As the proposal puts it: “When PlaNYC was first released in 2007, the recession had not yet begun, nor had Sandy hit our shores. We are living in a different city today, and different times demand different approaches. We now face multiple crises that threaten the very fabric of our city: climate change continues to threaten our future in a host of ways, while growing inequality gaps create other challenges. OneNYC lays out our approaches to dealing with income inequality along with our plans for managing climate change, all the while establishing the platform for yet another century of economic growth and vitality for this world capital.”

A: OneNYC certainly gives its daddy some props. “Since the first PlaNYC in 2007, the City has made considerable progress on reaching its goals. We have reduced greenhouse gas emissions 19 percent since 2005, invested billions of dollars to protect our water supply, planted nearly a million trees, installed 300 miles of bike lanes, and passed regulations and developed programs to phase out polluting heating oils. The city also strengthened coastal defenses, fortified crucial infrastructure such as wastewater treatment facilities, and worked to make buildings and neighborhoods more
resilient.”

Q: What challenges does the proposal suggest we must meet?

A: “Because so many people want to live here and many are doing well financially, affordable housing is scarce. A growing population—expected to reach 9 million by 2040—will test our infrastructure systems. Mass transit, roads, and other infrastructure are heavily used, but they have not been fully maintained over the years. For some New Yorkers, public transit is not easily accessible, or the system can’t get them across their own borough because it was designed to take people into Manhattan, and commute times are too long from many areas. As commercial rents go up and neighborhoods change, existing small businesses and shops, many of which are family-owned and have been in business for a long time, struggle to stay open. Our public schools need to improve. Slow Internet speeds and gaps in accessibility hamper competitiveness and the ability of New Yorkers to be a part of all that New York has to offer. Income inequality is rising and nearly half of the city’s population now lives at or near the poverty threshold, while 1.4 million residents live in households that lack sufficient food. Too many artists and talented mid-level professionals leave for other cities that are more affordable. Homelessness is too high, and over half of renters spend more than 30 percent of their income on housing. Asthma, obesity, and diabetes rates remain high, especially among residents in low-income neighborhoods. And we could be better prepared for climate change and other 21st century threats.”

Q: How is the plan organized?

A: There are four major chapters devoted to growth, equity, sustainability and resilience. Each chapter articulates several visions (listed in our next answer) like “Reduce risks of stormwater flooding in most affected communities” and then sets goals (e.g., “New York City will mitigate neighborhood flooding and offer high-quality water services) which will be accomplished by initiatives (e.g., “Initiative 3: Expand green infrastructure and smart design for stormwater management in neighborhoods across the city”) and, sometimes, “supporting initiatives” like “alleviate flooding in Southeast Queens.”

Q: What are the broad goals of the plan?

Q: How does the proposal suggest we will achieve that very large reduction in poverty?

Q: How does the de Blasio administration propose to meet its goal of sending no waste to landfills?

Q: Does the administration commit to banning or charging for plastic bags?

A: No. It discusses those options but concludes simply by saying: “Because so many viable alternatives to plastic bags exist—including reusable, compostable, and paper bags—we will work with the City Council to reduce the overall impact of these products on our local environment”

Q: Does the plan cover everything we need to know about the city’s environmental posture?

A: No, which reflects the complexity of the issues into which the report wades to admirable if not total depth. For instance, the report says little about exactly how clean the city’s waterways ought to be, an issue at the center of a wrestling match among environmentalists, the city’s DEP and state regulators. It’s unclear if the areas where the city treads fairly lightly are places the de Blasio administration has decided its not going to concentrate, or just topics that will get fleshed out later.

A: Not all of it. Many of the projects mentioned in the report were started by Bloomberg or the state, like the creation of new Metro-North stations in the Bronx and some of the water system projects. There are certainly a lot of new and newly embraced ideas. The newest thing is pulling so much of an administration’s to-do list under an interconnected set of visions, in particularly linking social equality with environmental survival.

Q: Is any of it controversial?

A: Some elements will be. In the diversity section is the statement, “This is the 21st century. It’s no longer acceptable for our teaching corps to be all female or our firefighters all male.” Male teachers might take umbrage at that. For different reasons, so my male firefighters. Beyond the semantics, the housing plan continues to reflect de Blasio’s belief that New York can and must build its way out of its affordability crisis, a notion that some critics do not accept. And there are ideas like “Save as You Throw,” which could be interpreted as charging people based on how much they throw away—an entirely sensible idea that New Yorkers will likely find hard to swallow.

Q: Can de Blasio do all this?

A: Not all of it, not on his own anyway. The proposal is up front about that: “While City government will take the lead in every single aspect of OneNYC, this plan also calls for action from other levels of the public and even private sector. That means calling for some actions that are not entirely within the control of the City government, but they are all steps that are credible and necessary. We will not stop pushing for the right thing for our people because some of it is out of our control.”

Q: What do people think about it?

A: City Hall gathered positive reaction here. Many organizations and people want more details. “As PlaNYC showed us … successfully achieving our ambitious goals requires a roadmap that allows us to measure progress,” the New York League of Conservation Voters said, even before the mayor had finished speaking on Wednesday. “The Blasio administration should quickly follow up with an implementation plan that includes funding sources, a timetable, baseline indicators to track progress, and an agency responsible for implementation.”

Q: What if I have something to say?

A: The administration is collecting comments here.

A: The proposal and website say little about implementation, possibly because most of the initiatives are woven into the work of city departments. The mayor said in his press conference that many of the initiatives will be reflected in the capital plan and executive budget due out May 7.

One thought on “Your ‘One New York’ Cheat Sheet”