Coalition Calls on City to Transform Trash in Upcoming PlaNYC 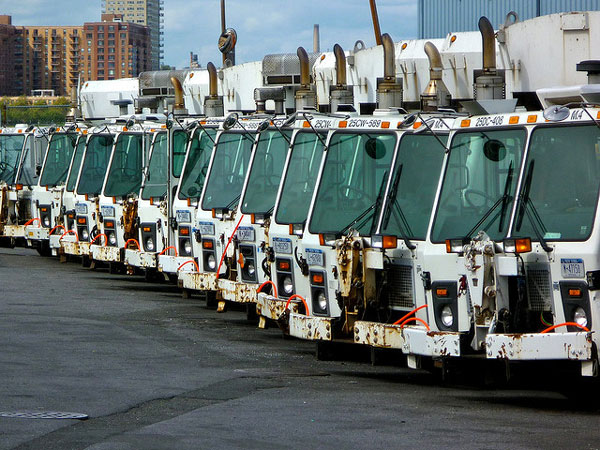 With the renewal of the City’s sustainability plan, PlaNYC, expected later this month, advocates are urging the administration to include a waste reduction goal in PlaNYC. To mark the first day of Earth Month, the Transform Don’t Trash NYC coalition launched a new video, website and online campaign to educate elected officials and New Yorkers about the economic and environmental hazards of New York City’s commercial waste industry.

According to Gavin Kearney, Director of Environmental Justice at New York Lawyers for the Public Interest, “For too long, NYC has allowed a commercial waste system to persist that needlessly landfills and incinerates millions of tons of waste each year, while disregarding worker and community well-being. Other cities that have gotten serious about addressing the environmental, public health, and economic issues of commercial waste management are approaching a 70 percent recycling rate and setting even higher goals. PlaNYC offers New York City the opportunity to set an ambitious 70 percent goal that will set us on the path toward greater sustainability.”

The campaign features City Council Member and Sanitation Committee Chair Antonio Reynoso, small business owners, and young people from environmental justice communities discussing the negative impacts that the city’s outdated waste system has on them, as well as solutions to create good jobs and clean and safe communities for all New Yorkers.

Councilmember Reynoso said, “The commercial waste industry is like the wild wild West. Their trucks clog our streets and create major health problems in our communities, especially low-income communities of color. Also, the conditions for the workers are generally very bad – we’ve heard stories of wage theft, lack of safety protections, and threats to undocumented workers. We need to reform this system to make it safer and more sustainable.”

New York City’s commercial waste industry is plagued by low recycling rates, poor conditions for workers, unfair siting of dumps, and lack of oversight. Advocates pointed to the urgency of the problem, and called on Mayor de Blasio and the City to take bolder steps to tackle New York’s commercial waste problem.

New York City only recycles a tiny fraction of what it could recycle. Advocates emphasized that increasing recycling would benefit the environment and also create tens of thousands of new jobs in recycling and recycling-reliant industries. The coalition launched a petition calling on Mayor de Blasio to set a 70 percent recycling goal in PlaNYC, which could create thousands of good new jobs.

“Waste work is very hard work, and it’s very dangerous work,” said Plinio Cruz, a Bronx native and commercial waste worker for the last ten years. “It’s outrageous that you have people working this job for minimum wage with no safety training. I would like the City to make sure that all waste workers are treated fairly.”

Angela Tovar, from Sustainable South Bronx said, “Commercial waste trucks have a major impact on the health and quality of life of local communities. South Bronx residents suffer from overwhelmingly high rates of asthma, diabetes and obesity — all linked with diesel emissions from truck traffic and environmental pollution. Reforming the commercial waste industry is an important step towards reducing local truck traffic on our streets and improving air quality in our communities.”

The online campaign is reaching out to New Yorkers who may not realize that commercial waste is rarely recycled or negatively affecting the air quality in their neighborhood. Transform Don’t Trash NYC is proposing a zone collection system, which more and more cities around the country are adopting, to improve the commercial waste system.

“For decades, low-income communities and communities of color have handled a disproportionate burden of NYC’s commercial waste. We are calling for reform of the commercial waste sector that will dramatically increase recycling and reduce truck traffic while creating good jobs for low-income New Yorkers.” according to Eddie Bautista, executive director of the New York City Environmental Justice Alliance (NYC-EJA).

“Right now, we have an outdated system with outdated oversight,” said Matt Ryan, Executive Director of ALIGN. “The good news is the City has the opportunity to adopt a 21st century system to increase recycling, good jobs and justice.”

ALIGN: The Alliance for a Greater New York’s mission is to create good jobs, vibrant communities, and an accountable democracy for all New Yorkers. Our work unites worker, community, and other allies to build a more just and sustainable New York.