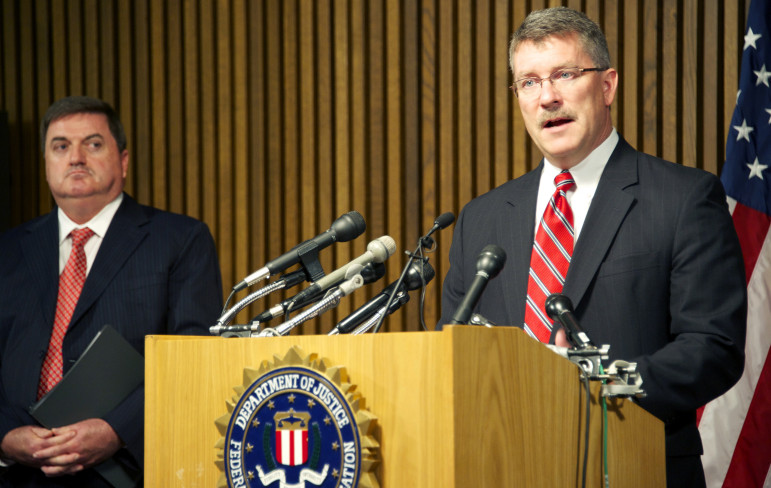 FBI official Ron Hasko and John Ryan, CEO of the National Center for Missing and Exploited Children, announce the 76-city sweep in 2013 that rescued 105 children who were victims of sex trafficking, most of whom had been in foster care.

January is National Slavery and Human Trafficking Prevention Month. When you hear the word trafficking you might immediately think of young children in third world countries who are forced to be soldiers or sold to brothels or pimps for sex with wealthy Westerners. However, trafficking is not just an international problem but is rooted on our soil. Right here in the U.S., and particularly in large cities such as New York, some of our most vulnerable children, foster children, are victims.

In June 2014, FBI agents and police officers participated in a weeklong effort across the country to rescue child sex trafficking victims, finding minors as young as 11 in hotel rooms, truck stops and homes. Many of the rescued children were never reported as missing, despite being under the supervision of state child welfare systems.

Historically, reports suggest a majority of children involved in sex trafficking are either currently in foster care or have been involved with the child welfare system in the past. Consider this:

Of children reported missing to the National Center for Missing and Exploited Children who are also likely sex trafficking victims, 60 percent were in foster care or group homes when they ran away.

Why? Unfortunately, the foster care system can be a pipeline to prostitution. One reason is that many adolescents see themselves as just a paycheck for foster and adoptive parents. Consider one of our clients at the Children’s Law Center, Nina, whose adoptive mother is 73, has had three strokes and is in a wheelchair, and in addition to Nina, adopted two other children now ages 6 and 8. Her only source of income besides her disability check is the adoption subsidies that she receives from the foster care system.

Nina’s adoptive mother uses her adult children to physically punish Nina but also makes it clear to them, “don’t hurt her too bad, I need that check.”

Nina’s experience is not isolated. In 2013, one young woman, Withelma “T” Ortiz Walker Pettigrew, testifying before the U.S. House of Representatives’ Committee on Ways and Means, told her story of foster care and being trafficked. The experience of foster care, she said, gave her the mindset that she was tied to a paycheck, that her worth and value were not intrinsic; she was worth only the money she brought in. This set her up as easy prey for traffickers:

From my own experience and that of others, the money that is given by the state is supposed to be utilized to provide for the child’s basic needs — however the money is often used for other things, specifically for special luxuries for the caretaker and their biological children and families, unrelated to the financial support of the child it was intended for. These caregivers will make statements like “you’re not my child, I don’t care what’s going on with you, as long as you’re not dead, I’ll continue to get my paycheck.” This “nothing but a paycheck” theory objectifies the youth and the youth begin to normalize the perception that their presence is to be used for financial gain. This creates a mind frame for the youth that their purpose is to bring income into a household.

When children feel that no one care about them, and are moved from one placement to another, craving attention and stability children can easily find themselves seduced by traffickers who initially make them feel care for, only to find themselves used for financial gain. Many children in foster care have been previously abused, putting them at further at risk. In addition, children who are placed into foster care as adolescents are automatically placed into group homes since foster parents generally are only willing to take young children. In fact, traffickers will often send one of their girls into group homes to find girls and urge them to leave by saying things like they will be well taken care of financially and have a “family” so to speak who will care for them.

Notably, the average age of children who are trafficked into prostitution that are picked up by law enforcement for the first time is 14. Experts have extrapolated that these girls have generally been “on the track” or “in the life” for at least two years meaning the average age entering the sex trade would be 12. One of my colleagues worked with a client who was 10 when she first became trafficked. One of my former adolescent clients, Sherry, was beaten by pimps and johns time and time again. Each time she would contact me and I would visit her in the hospital. While I always encouraged her to leave the life and, in one instance got her to enter into a program, she kept returning to her pimp and ultimately was killed. It wasn’t enough to have an attorney such as myself who cared enough to be there for her when she was in crisis. She needed someone to be there in the day to day, to tell her that she mattered and that she was cared for.

Unfortunately, the foster care system in New York City perpetuates a reliance on foster care and adoption subsidies that prioritizes the money over the child. This was made abundantly clear in a recent exposé which revealed that hundreds of adoptive parents continue to get monthly government subsidies of up to $1,700 per child even though their child is no longer living with them. They can receive the subsidy until the child is 21 unless they voluntarily terminate the subsidy, which many do not, even if the child re-enters foster care.

While it is often deeply flawed, and probably overused, foster care is a necessary, and in some cases, very positive, policy response to the real problems of child abuse and neglect. So, what can we do to improve outcomes for children in foster care? It is crucial that help children in the system feel more like children in families. This will require a necessary change in how foster parents are recruited and from where. So that future children in foster care can be given what Nina and Sherry did not have, foster and adoptive parents who are committed to them and their development into adults, and who at the most fundamental level will let them know that they matter, and are loved and cared for.

The views expressed are those of the author and not the organization.

12 thoughts on “Why Human Traffickers Prey on Foster-Care Kids”