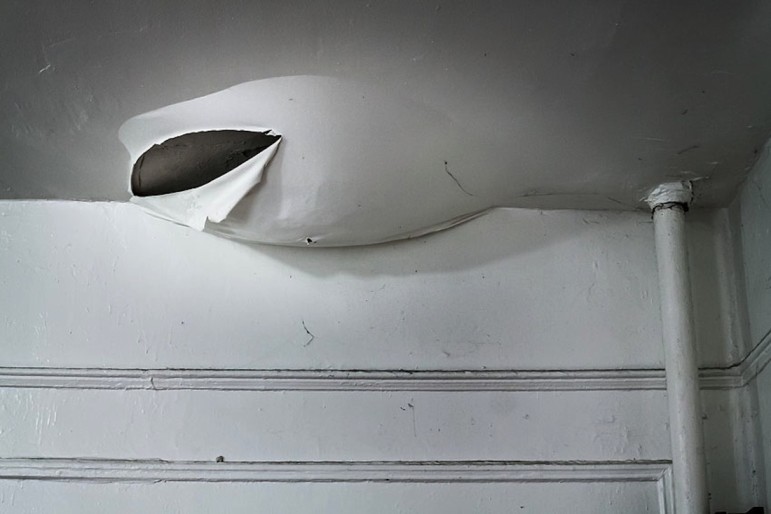 A leak led to bulging plaster inside an apartment at 2856 Webb Ave last spring. The building still has 270 violations.

Last spring, City Limits reported on 2856 Webb Ave., a 25-unit apartment building in Kingsbridge Heights. It was in terrible condition then … and the same is true now, according to the re-launched NYC Landlord Watchlist an article in The Riverdale Press, and the city’s Department of Housing Preservation and Development (HPD).

For six years, the violation-plagued building was in the city’s Alternative Enforcement Program (AEP), created by the City Council and former Mayor Michael Bloomberg in 2007. In April, in one apartment alone, light fixtures didn’t work, windows wouldn’t stay open (one wouldn’t stay closed) and stove knobs were missing.

AEP is generally a successful program that housing groups in particular say works best when community organizers are involved. But 2856 hasn’t gone that route. It’s still in lousy shape, according to a tenant interviewed by the Riverdale Press and 270 violations the building still has with HPD, including 48 of the worst kind. Those include broken bathtub faucets, water leaks and “unsafe electric wiring.”

Last spring, HPD brought the building’s owner, Dran Vataj, to Housing Court, and a consent order he signed stipulated “that the owner has 90 days to comply with the AEP order to correct.”

But while the owner did replace the roof and waste lines, he “has not replaced the heating plan and has not been cooperating with providing access,” HPD says. The agency spent $27,358 from 2004 to 2014 “to perform emergency repairs the owner failed to make.” The owner also owes another $29,000 in fees related to being in the AEP.

HPD is in the process of figuring out what do next. “We are currently weighing additional legal action due to the owner’s noncompliance,” the agency says.

2856 Webb is not alone. The worst buildings on Public Advocate Letitia James’ list include 200 in the Bronx.