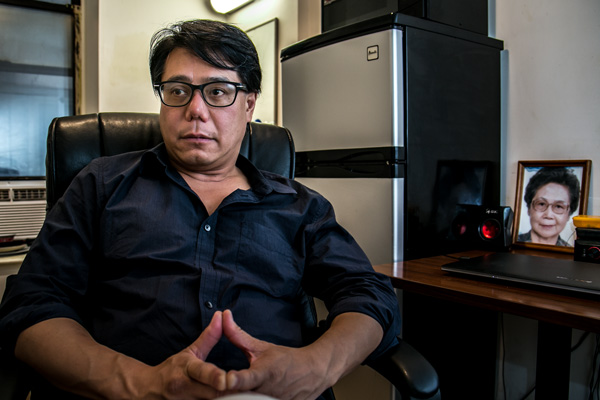 John Goh has been living at the Cecil, a building run by Housing and Services, Inc. in Harlem, since July of 2012. The Cecil opened in 1988 and houses 89 formerly-homeless single adults.

New York’s affordable housing crunch has only been getting worse: The number of families in the homeless shelter system in September was 11.5 percent higher than a year earlier.

Mayor de Blasio’s 10-year affordable housing plan, which laid out a proposal to build or preserve 200,000 affordable housing units, has advocates from the nonprofit sector and government cautiously optimistic that homeless numbers can improve in upcoming years.

The accelerated expansion of supportive housing, in particular, is being viewed as an integral part of the city’s necessary housing reform—and lauded as one of the most efficient and tested methods for combatting homelessness and improving quality of life for clients. The de Blasio administration agrees, mentioning in its “Five-Borough, Ten-Year Plan” that it’s a “cost-effective intervention that provides a permanent, affordable place to live combined with on-site services.”

“Research has shown that supportive housing improves the surrounding neighborhood and can help keep even those with the most severe barriers to independent living stably housed in their own apartments,” the housing plan continued.

But exactly how big a part supportive housing will play in the mayor’s plan in unknown. Advocates for supportive housing are pushing an ambitious goal. The New York/New York IV Campaign is vying for 30,000 units to be built in both the city and state over the next ten years, with projects starting in 2016. The NY/NY IV Campaign is a detailed supportive housing proposal spearheaded by the Supportive Housing Network of New York and endorsed by hundreds of other nonprofits and companies, all of which would like to see an authorized agreement as soon as possible.

More than a home

As referenced in de Blasio’s outline, supportive housing is a form of affordable housing that offers residents access to on-site support, including primary care, psychiatric care and overall holistic case management, which can come in the form of money management, support in finding employment, counseling or other services.

Eligible residents include severely mentally ill individuals, the chronically homeless and those with a substance abuse condition. Despite the help on hand, these living situations are not institutional at all: case managers meet with tenants once a week, but other than that, tenants are given support when the need arises and they generally live independently.

“Our goal is to take a person-centered, recovery-oriented approach to working the tenants in the buildings to help them to lead flexible and satisfying lives in the community,” says Adina Barbosa, associate director for programs at the Center for Urban Community Services. “And that means different things for different people. So really, our services are tailored to the needs and the goals of each individual tenant that we work with.”

Ronald Walbrook, a meticulous 70-year-old SH resident who’s lived in the Schermerhorn since 2011, is grateful for his clean, independent and supportive living environment.

“If I didn’t have this right now, I’d be out on the street,” he says, looking back to the housing problems he began facing about 10 years ago, when his age truly began hindering his ability to find one of the jobs in carpentry or manual labor that he had held in his younger days (like the gig that cost him a finger in 1979 when a machine malfunctioned). Walbrook was homeless during the two years before he came to the Schermerhorn, a period during which he was in and out of the shelter system and often slept outside.

“When I was in the street, I had a box. And it wasn’t like you could take it home with you. You know, cop come, moves you – you gotta move. So I went from place to place,” he says, mentioning difficulties getting a consistent bed in different shelters. “This is way better, and I appreciate it, you know? I don’t get a chance like this every day to take a good shower and get to clean my own bathroom. It’s very different.”

Hopes for a fourth round

The NY/NY supportive housing push started in 1990 with NY/NY I, which created 3,615 supportive housing units for homeless mentally ill individuals. This continued with NY/NY II in 1999, which called for another 1,500 units over a span of five years. At the moment, New York is still in NY/NY III, a 10-year plan that began in 2006 and, among other things, laid out a blueprint for 9,000 supportive housing units to be built. According to supporters, the effort was able to decrease chronic homelessness in single adults, many with severe mental illness and substance abuse disorders, by 47 percent over the first five years of the program.

The last 1,000 NY/NY III units are slated to come online in 2015 and early 2016, but according to Nicole Branca, executive director of the Supportive Housing Network of New York, a new agreement needs to be reached quickly to prevent a lapse in development, and to escalate the city’s dedication to supportive housing.

“The demand is far outpacing the supply right now, and that’s with at least 1,000 units a year coming online,” she says. “Without a new agreement, it’s only going to get worse because the only thing that will be available are the vacancies, and there are so few.”

Openings are indeed sparse – over 20,000 NYC households are found eligible for supportive housing each year, yet only one in six are successfully placed.

Supportive housing involves more than the construction, building maintenance and rent subsidy costs that come with any affordable housing development: there has to be a budget for the services that tenants receive. But the public savings of supportive housing programs have been well-documented, most recently by a cost analysis study conducted by the New York City Department of Health and Mental Hygiene, which found that having this on-site support saved an average $10,100 per resident compared to eligible but unplaced applicants. The latter often end up using more public funds living in shelters, spending extra Medicaid dollars on frequent hospital visits and going in and out of different institutions like psychiatric facilities and jails.

It’s numbers like this that make other housing advocates praise supportive housing for the potential good it can do for the city, although they also acknowledge that the mayor’s housing plan will have to address a range of housing needs.

“Certainly, we think [supportive housing] should be a big part of the plan – what percentage, I don’t know,” says Benjamin Dulchin, executive director of the Association for Neighborhood and Housing Development. “There is a pretty huge need for affordable housing and there’s a pretty substantial need for supportive housing. As much as you can build of either of those, you would still need more. That’s just the nature of the city.”

Branca and other advocates agree that a confluence of events in recent years, particularly the economic collapse in the late 2000s paired with Bloomberg’s termination of the Advantage program (a flawed but potentially fixable program that provided subsidies for the homeless) in 2011, have severely worsened the city’s housing climate, despite the positive work done by New York/New York III. As a result, NY/NY IV is far more ambitious, and despite the positive feedback so far from de Blasio and the state, specific plans for funding and development still need to be settled.

“We need to be ambitious and make sure that we’re providing enough resources,” says Stephen Levin, Brooklyn councilman and chair of the city’s General Welfare Committee. “I would caution against being conservative.”

Branca is optimistic about getting capital funding for new supportive housing development: the mayor issued a $2.5 billion capital housing budget for the next four years, a portion of which Branca says would have “absolutely no problem expanding NY/NY III.”

But NY/NY IV is set to be a statewide program, and although it’s sure to remain predominantly city-based, expanding the program to other parts of the state could complicate the process. Branca points out that since the city has about 75 percent of the state’s homeless population, which indicates roughly how the city and state might split the new units, but she concedes that there are several issues at play that make it tough to predict.

“It’s often harder to develop outside the city because the areas don’t have the support that the city is willing to kick in,” says Ralph Fasano, executive director of Concern for Independent Living. “In NY/NY III, there’s a 50-50 [city-state] match in resources, and the state might be willing to do that, but in certain areas, it’s harder to get the localities to buy into it.”

So, there’s a clear template for what’s already been done, and what’s worked, in the city, but the governor’s office is likely still “sifting through what a supportive housing program will look like statewide,” as Branca puts it.

Beyond the capital dollars, it’s imperative to secure ongoing operational funds to pay for supportive services. But the program’s track record has spurred interest in doing just that. For instance, the state’s Medicaid Redesign Team has worked in tandem with SHNNY since MRT’s creation in 2011, and ongoing calculated savings have continually been funneled back into supportive housing to create further Medicaid savings.

Advocates firmly believe that fully investing in supportive housing will someday change the status quo of institutionalization and hospitalization throughout the state, eventually facilitating the redistribution of budget and personnel away from jails, hospitals and shelters and into housing.

For the moment, there’s still time, but the push to accelerate the efforts of previous NY/NY campaigns and reach various agreements as soon as possible remains at the forefront of the issue, even if it’s been relegated with other issues to state government’s back-burner until after the election. But not that much time.

“We still have a little less than two years before NY/NY III is up, but the capital development will stop next year without that new commitment,” Branca says. “So that’s the challenge, because if we don’t get that, then homelessness is going to spike even more because we won’t have those [new] units coming online.”