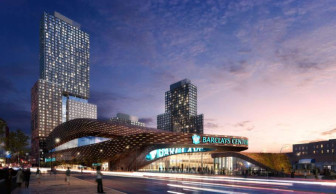 Rendering of the Nets arena and first three buildings due to be built on the Atlantic Yards site.

Governor Andrew Cuomo and Mayor Bill de Blasio took credit for dramatic news announced June 27 regarding the controversial Atlantic Yards project, which, despite the opening of the Barclays Center in 2012, had delivered none of the affordable housing that was a huge selling point when the project was unveiled in 2003, approved in 2006, and re-approved in 2009.

They announced a deal, responding in part to a threatened fair-housing lawsuit by community groups, that promised the 2,250 subsidized apartments (of 6,430 total) would arrive by 2025, ten years before the 2035 “outside date” agreed to in 2009. That’s still slower than the ten-year buildout long touted by developer Forest City Ratner.

“Today we are… expediting the construction of thousands of units of affordable housing in Brooklyn,” Cuomo said in a statement. “This agreement is a win for the state and most importantly for Brooklyn residents.”

Those statements, bolstered by endorsements from community groups that pushed for a faster timetable and some local elected officials, obscured some key changes that bolster the developer and satisfy the city’s hunger to count affordable units, as well as one that addresses a flaw in the first tower being built on the site.

First, as emerged later that day, 390 of 600 units in the two all-affordable towers will go to households earning more than $100,000, a departure from the long-promised configuration that distributes the units more among low-, moderate-, and lower-middle-income households. Rents for two-bedroom subsidized units might approach $3,000.

The two towers will include 180 low-income units, serving families earning up to $51,540 (as of 2013) for a household of four. But that 30 percent share of total affordable units is less than the 40 percent share long promised in the Housing Memorandum of Understanding (MOU) Forest City Ratner signed with ACORN in 2005 and incorporated into the Atlantic Yards Community Benefits Agreement (CBA). The upper middle-income affordable “band” (serving a four-person household, earning up to $141,735) was supposed to represent 20 percent of affordable units, but in these towers will represent 50 percent. The moderate-income band, 20 percent in the MOU, would instead be 5 percent.

Such details were omitted in press releases from the state and the community groups, led by the Fifth Avenue Committee (FAC) and the larger BrooklynSpeaks coalition, that pushed for the changes.

Supporters of the June deal called it superior to the first Atlantic Yards residential tower, a 50 percent market-rate and 50 percent affordable building which is due to open in December 2015. Compared with that building, known as B2, “we’ve secured nearly twice as many affordable units for our City investment,” de Blasio said. He was apparently noting that the B2 second mortgage, from the New York City Housing Development Corporation, is equivalent to that for each new all-affordable building, though the city has not yet released the overall financing package for the new towers.

However, the mayor did not acknowledge that the city compromised by agreeing to far more middle-income affordable units, which reap higher rents for the developer, despite de Blasio’s testimony in 2006 that the CBA “must be adhered to.”

Touting the deal on Inside City Hall July 1, Deputy Mayor Alicia Glen, who helped craft it, said the administration wanted “to see as much affordable housing built as quickly as possible, because we are in a real time affordability crisis for a massive number of New Yorkers.”

Noting that the crisis hit more than just low-income residents, Glen said officials wanted to ensure they were serving “a very wide income range,” including “workforce” members like cops and teachers. She didn’t acknowledge how the configuration departed from the MOU.

Looking at the trade-off

In response to a query, Michelle de La Uz, executive director of FAC, acknowledged that community groups that pushed for an accelerated timetable “were not consulted nor asked to sign off on any aspect of the affordability levels.”

The threatened lawsuit charged that the delay in Atlantic Yards affordable housing would disproportionately affect African-Americans, who, as rising costs led to displacement in the surrounding neighborhoods, would no longer be eligible for the lottery that reserves 50 percent of slots to those in four nearby Community Districts. (Had it gone forward, the lawsuit might have thrown a wrench in Forest City’s just-signed plan to build Atlantic Yards with a new joint venture partner, the Chinese government-owned Greenland Group.)

While “income levels were not part of [the lawsuit’s] claim,” de la Uz said, “our research shows that the impact of the delay occurs across all AMI bands for African Americans.” Added de la Uz, “We continue to believe the AMI levels should be looked at for the project to try to make the units affordable to more Brooklynites.

One critic of the Atlantic Yards plan, however, believed the tradeoff was too favorable to Forest City.

Will affordable units continue to depart away from the promised template as the rest of the Atlantic Yards project builds out? Council Member Brad Lander said he’s been assured that the low-income units ultimately will represent 40 percent of the total affordable units across the whole development. City Hall didn’t respond to questions about whether the other affordable units would skew upward.

Supporters of Atlantic Yards stress that, whatever compromises the new deal embodies, and despite the controversy the development generates, the rear-guard response to gentrification at least offers more affordability than the plethora of luxury construction nearby.

Ismene Speliotis, the executive director of Mutual Housing Association of NY (MHANY, a successor to ACORN as Forest City’s housing partner), called the June 27 agreement “welcome news.” She had testified at a state hearing April 30 there was only 6 percent affordability in new construction around Downtown Brooklyn. “I am glad that we didn’t build more under the old mayor because I have hope under the new Mayor that we are going to do better,” she said at the time. (Speliotis, who was traveling outside the country, was contacted for comment but did not respond by press time.)

Speliotis testified in April that “absolutely” the next towers would have more two- and three-bedroom units than the tower already under construction, B2, at the corner of Flatbush Avenue and Dean Street, which has only 20 percent two-bedroom units.

Indeed, Glen said that the two new towers would have 35 percent two- and three-bedroom units, which may meet Forest City’s promise, in the MOU, that 50 percent of the affordable units, in floor area, be family-sized units.

It’s unclear whether the new family-sized units are distributed evenly among the five income “bands.” As City Limits reported in 2012, Forest City and the New York City Housing Development Corporation engaged in a forceful debate about two-bedroom apartments in B2, with the developer agreeing to add more units but skewing them toward households earning six figures rather than distributing them evenly.

In affordable housing projects citywide, it has been more difficult to get developers to deliver larger units, since city housing policy typically assigns subsidies by unit, not by number of bedrooms. The mayor’s housing plan, released this spring, said the city would amend policies to develop more studios and three-bedroom units.

Lander said, “I have been pushing (along with many other elected officials, advocates, and neighbors) for a higher percentage of family-size units, both at Atlantic Yards, and in affordable housing financed by the City of New York more broadly.”

The provision of two 100 percent affordable towers, as well as emerging plans, puts Atlantic Yards on a course to depart from the promise that all rental towers would mix affordable and market-rate units.

According to the 2009 Modified General Project Plan approved by Empire State Development, in Atlantic Yards Phase 1 (which covers the towers around the Barclays Center), “All rental buildings would be mixed-income buildings with a combination of low-, moderate- and middle-income and market- rate units integrated throughout.” There was no such language regarding the rest of the project. (Of the two buildings covered by the deal announced by de Blasio, one is part of Phase I but the other isn’t.)

Affordable housing advocates have long resisted the separation of such housing, since it can lead to unequal delivery of services and reduce the benefits of mixing incomes. Atlantic Yards was supposed to make integration a priority.

“More than anything, in an era of increasing housing segregation, Atlantic Yards will be one of the only neighborhoods in Brooklyn where families of all backgrounds will be able to really live and grow together,” Bertha Lewis, then executive director of New York ACORN, wrote in City Limits in 2006. “That’s because ACORN insisted, and Forest City Ratner agreed, that the affordable units be spread throughout every rental building at random on every floor… For the first time in a project like this, low-, middle- and upper-income people will live — literally — together.”

That’s no longer the plan. Asked whether 100 percent affordable towers might move Atlantic Yards away from promised economic integration, de la Uz, who was Public Advocate de Blasio’s appointee to the New York City Planning Commission, said it was worth it to get the 600 affordable units quickly.

But there’s reason to suspect the developers might have produced mixed-income buildings offering the same amount of affordable housing. Forest City and Greenland plan to start two condo buildings at the same time as the two 100 percent affordable rentals.

According to a draft document obtained by this reporter, Forest City is considering a plan in which six of 14 residential towers contain exclusively market-rate towers (three rental, three condo). Of the remainder, two would be the just-announced 100 percent affordable rental buildings, five would follow the promised 50 percent affordable/50 percent market template for rentals, and one would mix condos and 50/50 rentals.

It should be easier, financing experts say, to finance and rent out an all-luxury building. Each unit can boast the same higher-end finishes and potential residents—however much they give lip service to economic integration—may prefer their own economic cohort.

When de Blasio was considering a run for Brooklyn Borough President in 2007, he was asked if those earning six figures should be eligible for subsidized housing.

Seven years later, housing costs are squeezing even more New Yorkers—including many in the middle-class. De Blasio is also under pressure to begin delivering some of the 80,000 new affordable units he promised in his housing plan.

In that plan, which also aims to preserve 120,000 units, only 11 percent would go to middle-income households—versus 65 percent in the two all-affordable Atlantic Yards towers.

The emerging Atlantic Yards configuration thus suggests a tension: While it contrasts favorably with the plethora of luxury buildings nearby (though it got more special benefits) and does serve “workforce housing,” it leaves de Blasio vulnerable to criticism faced by predecessor Mike Bloomberg, whose focus on meeting numerical goals led advocates to claim his housing record scanted “real affordability.”

The two new towers would include no market-rate housing. The market-rate portion is being shifted to subsidized housing targeting higher income levels: