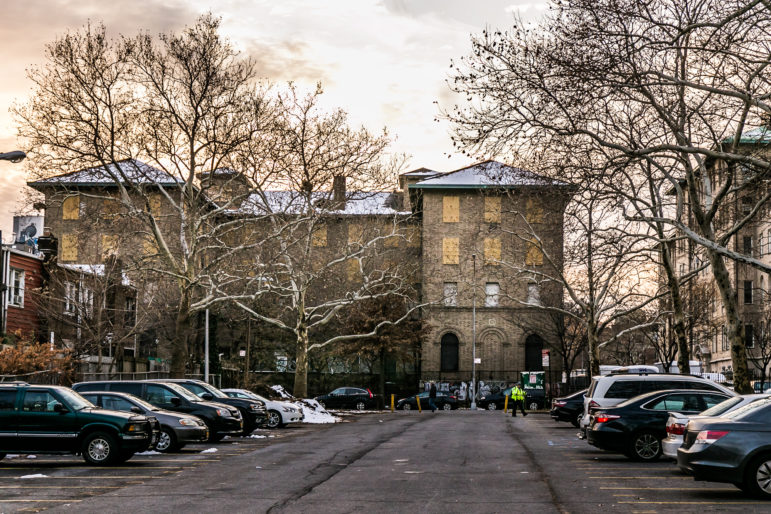 A view of a boarded up building on the southeast corner of the Greenpoint Hospital complex from a parking lot in Cooper Park NYCHA housing in East Williamsburg, Brooklyn.

The neighborhood surrounding Cooper Park is one of Williamsburg’s last sleepy corners.

Flanked by the industrial business zone on the east, and the long-vacant Greenpoint Hospital on the west, the few surrounding square blocks are dramatically set apart from the bustle closer to the Graham Avenue L train stop. The area is home to rows of single-family homes, a fluffy green park and the NYCHA Cooper Park Houses complex.

But within a few months this fall, the city announced two separate plans to redevelop sections of the area—the abandoned and underutilized Greenpoint Hospital site, and across the street, a parking lot owned by the city’s public housing authority—for a total around 750 new apartments within a two-block radius.

And while it’s not technically one of the de Blasio administration’s 15 neighborhoods slated for rezoning to spur housing development, the two combined projects will dramatically alter the lay of the land in the coming years and have ripple effects throughout the entire area. That’s why a coalition of tenants from Cooper Park Houses are fiercely opposing NYCHA’s plan to build a up to a 15-story building on a parking lot.

“It’s going to be ugly,” says Elisha Fye, 64, a tenant leader at Cooper Park Houses and near lifelong resident of the development. He worries it’ll be “an influx of people living on top of each other…That’s basically what it’s going to be like.”

Norma Ortega, 77, a resident of Cooper Park for nearly six decades, echoes the concerns of many Cooper Park tenants who were angered by the potential disappearance of the parking lot, the loss of natural light on one side of the development blocked out by a 15-story tower and the influx of hundreds of new neighbors.

“They’re taking our privacy away from us, our ventilation. We don’t know what we’re going to get in there,” she says.

Opponents of NYCHA’s plan also point to traffic-clogged streets and truck traffic to and from the adjacent industrial zone, which they fear could mix dangerously with a larger number of pedestrians drawn by development. They point to the crammed L train and the nearest elementary school, P.S. 132, which already has 120 too many students, according to the city’s most recent estimates.

But not everyone sees the changes as threatening.

“It could be a bellwether for the neighborhood,” says Lyon Porter, a real-estate broker with Corcoran, who focuses on the subsection of Williamsburg around the Graham Avenue L train stop south of the Brooklyn-Queens Expressway.

Redeveloping the long-underutilized Greenpoint Hospital could act as a magnet, pulling new interest further east. So far redevelopment of newer larger apartment buildings has stayed to the west of Bushwick Avenue, he says.

And the affordable housing components in both projects—100 percent of the Greenpoint hospital site, and half of the around 250-apartments slated for the NYCHA parking lot—will help the area maintain some economic diversity as it continues to rapidly gentrify, he says.

“It could have just turned into market-rate condos, with a small affordable component,” Lyon says.

But some residents wonder if the two branches of city government separately developing plots of land across the street from one another—NYCHA and the Department of Housing Preservation and Development or HPD—are taking into account the combined impact both projects will have.

Those concerns are shared in the office of local Councilman Antonio Reynoso, whose chief of staff Jennifer Gutierrez says that in the case of a formal rezoning a number of extra supports and resources would be put in place to brace for the impact of thousands of new residents. Yet in the case of the area around Cooper Park, she said, “they’re looking at it very piecemeal.”

“When we’re looking at the waterfront, we’re seeing so much more congestion. I think that’s kind of what we’re going to see in this one little block,” Gutierrez says. “We’re concerned about the schools, about the open space, about the transportation, about everything.”

Leroy Williams, a NYCHA representative in charge of community outreach, put it bluntly: The Greenpoint Hospital site is not NYHCA’s and thus, they can’t monetize it.

“The key thing is, we wouldn’t get the money,” he said. The plan proposed for Cooper Park, dubbed Next Generation Neighborhoods, aims to lease the parking lot out to a developer and use the funds to begin to chip away at the $60 million backlog of repairs at the complex. Half of the funds are supposed to go to Cooper Park while the rest get split across developments across the city. NYCHA’s overall capital to-do list is now at $25 billion.

City officials point out that both projects will most likely undergo separate environmental reviews before any shovels hit the ground.

“Each environmental assessment will acknowledge the other as part of the background growth in the surrounding study area,” says Matthew Creegan, spokesman for HPD. “While these projects are within the same community, they are led by different agencies, will have different developers, will occur on different timeframes and—importantly—will proceed whether the other moves ahead or not.”

The EIS process, however, has come in for criticism in other neighborhoods because rigid EIS rules can leave seemingly obvious and important impacts outside a study’s scope. What’s more, an EIS finding of adverse impact cannot block a project, but merely requires the city to propose mitigation measures that might or might not adequately address the issue, if they are even implemented.

Still, Porter says that while pushback from nearby residents is understandable, the public good will eventually their outweigh the initial shock and frustration.

“As a city we benefit from things like this,” he adds. “That is what makes New York City neighborhoods stay a melting pot and I think that that’s a great thing.”

The disconnect between HPD and NYCHA is maddening for residents who live on either side of both developments and will bear the brunt of the commotion during construction and then live beside thousands of new residents in the coming years.

“There’s no coordination. If they coordinated they’ll be able to see they were putting 700 units within this one block, or block and a half,” said Jimmy Perry, 48, a homeowner on Maspeth Avenue whose backyard butts up against the NYCHA parking lot the agency plans to develop.

Perry thinks if they were working together, they might realize the plans are, “kind of a little absurd and maybe [they] need to take another look at it,” he said.

“It’s just thousands of more people in that area. When we’re looking at the waterfront. we’re seeing so much more congestion. I think that’s kind of what we’re going to see in this one little block,” said Jennifer Gutierrez, the Chief of Staff in local city councilman Antonio Reynoso’s office. “We’re concerned about the schools, about the open space, about the transportation, about everything.”

In the case of a formal rezoning the city would, “they’re looking at it very piecemeal.