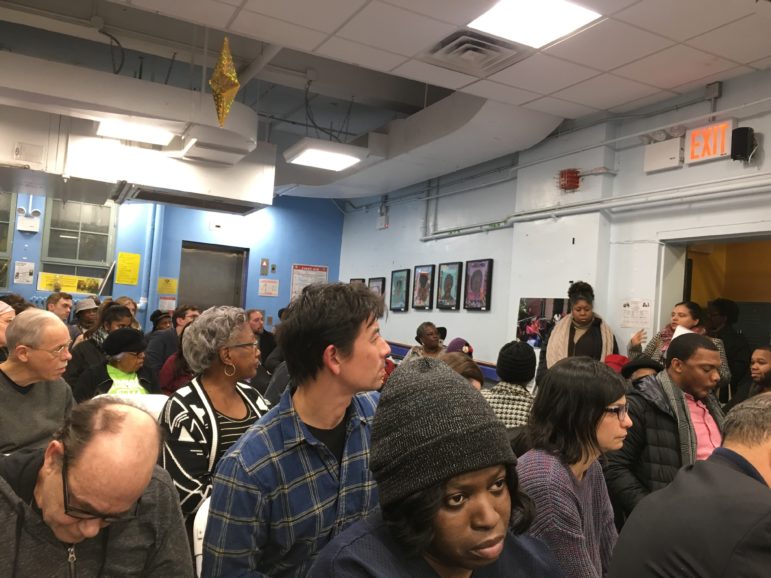 Inside Monday's meeting at the Queensbridge Houses about a possible NYCHA rent strike.

Dozens of NYCHA residents and housing advocates gathered at the Jacob Riis Settlement Center in Queensbridge Houses on Monday night to discuss the beginnings of a plan for a NYCHA rent strike and the impact of Amazon on public housing residents.

The Justice for All Coalition hosted the event to discuss the possible rent strike and distribute a survey to NYCHA residents about problematic living conditions such as mold, delayed or nonexistent repairs, rodent infestations, and a lack of heat or hot water.

Sylvia White, chairperson at the Justice For All Coalition, said the rent strike–if it occurs–would address some of the main issues that many tenants across NYCHA housing complexes face on a daily basis. For now, the strike is in its planning stages.

“We are consulting with lawyers because we want the tenants to be well-informed,” said White. “The rent still has to be paid in escrow. We are taking a survey to determine what the current living conditions are so they can be addressed. We have to take matters into our hands. We cannot solely depend on elected officials because our lives are at stake here.”

In 2013, residents at NYCHA’s Lexington Houses in East Harlem threatened the city with a rent strike after more than two weeks of no gas throughout the 112-unit, 14-story tower impacting about 400 people, the New York Daily News reported. After the announcement of the rent strike, NYCHA made repairs twenty-four hours later.

The survey is geared towards tenants in Astoria, Queensbridge, Ravenswood and Woodside public housing complexes but tenants from other NYCHA housing are also welcomed to participate. White said until they get more information from tenants and find more residents who want to participate in the rent strike, the plan will not move forward. “We want to make sure that we do this correctly and make sure residents are well informed.”

She said the list of worries for residents includes the private development of public-housing land through the NYCHA NextGen plan, the possibility of a federal monitor over NYCHA housing and Amazon’s plan to build a headquarters at a Long Island City site neighboring Queensbridge Houses, the largest public-housing complex in the country.

At the meeting, tenants spoke about much-needed repairs in their apartments. When one mentioned mold, there were shouts of commiseration.

Fifty-year-old John Gilliam, a Queensbridge public-housing resident, told the crowded room that when he has to go to the local NYCHA management office to lodge a repair complaint, he has to cancel his plans for the rest of the day, “I go in at eight in the morning and around 12 p.m. no one is around,” said Gilliam, who has lived in public housing for over 30 years. “You wait all day long.”

Another tenant from Baruch Houses in Manhattan said she had lived with a hole in her kitchen for weeks that allowed vermin and water bugs to infest her apartment. Another senior-citizen tenant said the rent keeps rising but she did not see improvements in her building from light fixtures to elevator issues.

The coalition had one lawyer listening carefully while community activists talked about the next steps NYCHA tenants to could take before a rent strike.

“Keep a paper trail. Keep track of your repairs. Take pictures and date them. Ask for a reduction in rent. And if they don’t come then take them to court, file a grievance, individually or as a group,” said Dannelly Rodriguez, a student from the CUNY Law School. “[Politicians] come here do all the press photo ops and then leave. The minute you stop paying them is when they will take you seriously.”

Some tenants had more questions and some were hesitant about participating in the rent strike but all agreed that repairs were needed across all NYCHA housing.

City Councilmember and public advocate candidate Rafael Espinal said he supported the rent strike and had proposed a plan that could help fix the MTA and NYCHA through unused Stock Transfer Tax funds, a tax which has been rebated back to investors for years. Espinal said the Stock Transfer Tax fund is in the billions and could jumpstart the repairs needed for transit and public housing in the city.

For some in the room, the huge subsidies awarded to Amazon to entice it to come to LIC indicated misplaced priorities.

“NYCHA is absolutely connected to all of this,” said small business owner and Justice For All Coalition member Nick Velkov, who said he did not trust the Amazon jobs guarantee because the deal was behind closed doors between the company and the de Blasio and Cuomo administrations.”What will happen to public housing in this area? It belongs to taxpayers like us. We are having all of these issues [at NYCHA] but they could find the money for this [Amazon] deal.”