Wash. Heights Tenants Wonder: Is the Problem the Leak, or the Landlord? 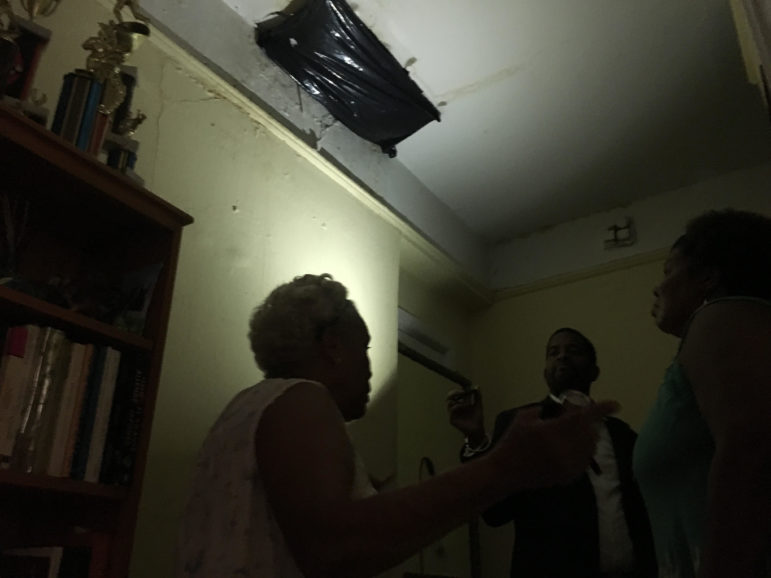 Tenants at 562 West 174th Street in Washington Heights display some of the damage done by a persistent leak.

The leak from the rooftop of Julia Del Orbe’s Washington Heights apartment began on a rainy April day and moved downwards to the apartments below. Over the next few months, the leak turned into a small waterfall in a few of the apartments, damaging doorways, ceilings, walls and floors. The tenants, including Del Orbe, complained to the superintendent and the property management company, but any repairs that were done were superficial, according to the tenants interviewed and visited by City Limits.

Eventually, mold began to appear. The row of apartments affected by the leak are all rent-stabilized units at 562 West 174th Street in Washington Heights. The property was acquired by Shamah Properties in August of last year and is operated by Shamco, its property management company, according to city records.

After Shamah Properties acquired the building, tenants saw improvements being made almost immediately.

“They fixed the lobby area, put in new light fixtures and painted everything through Christmas,” said Regina McRae, whose daughters lease the apartment and are her primary caretakers. “We were a little bothered by the all construction but also happy that someone was improving the buildings.”

The honeymoon ended for McRae when the leak began in her bathroom in December*. McRae said the damage was so bad that eventually part of the bathroom ceiling fell into her tub. Several weeks later and after complaining, the superintendent repaired the ceiling with a temporary cardboard covering while he tried to find the source of the leak. Eventually, the cardboard also gave in and mice began falling on McRae as she showered. “I started taking showers at my friends’ homes,” she said.

According to McRae, the superintendent did replace the cardboard with sheetrock in the bathroom but the leak continued, “After that, the smell of mold began to settle into the home,” McRae said.

A few months later, the leak in Del Orbe’s home made it through the McRae home, “It came right through the light fixture in the ceiling and in my doorway. I pray every time it rains because it means that I have to collect buckets of water and dump it in the bathroom. And I am not alone—almost every apartment beneath me has been exposed to mold,” she said in a phone interview. “This has been a nightmare.”

McRae has been documenting the leak and its damage with videos and photographs that she shared with City Limits. The videos show mini waterfalls coming through her light fixtures, a pool of dirty water on her floors and damage to her vintage book collection. She also took photographs of the apartments below hers’ showing damage to closets, clothing and the doorway.

Del Orbe has a garbage bag taped to the ceiling covering the hole there, while in another apartment where Martina Perez babysits her grandson a few times a week, the light fixture has stopped working in the doorway and mold has begun to appear around the ceiling and along the floor moulding. Meanwhile, in the first-floor apartment, the mold smell is so strong it can cause an immediate headache, and visible water damage can be seen from the entrance into the living room.

Last week, the city’s Department of Housing Preservation and Development issued additional violations to the building after several calls were made to 311 by some of the tenants. According to HPD, 48 of the 70 open violations at the property were reported since August 1st and there is a pending owner’s certification that will need to be corrected.

The August 9th inspection resulted in four class B violations. Two additional inspections in the following days resulted in 20 more. All told, the building has been cited for problems with leaks, plaster damage and unpainted areas.

According to Shamco Management, some of the violations were inherited when Shamah Properties acquired the property. Don Sanger, administrative director of Shamco Management, said the company was trying to rectify the issues as quickly as the complaints are received, “We have a 24-hour hotline but many tenants call 311 instead because it’s easier for them. If we get the complaint then we can document the issues and have someone address the repair within 24 to 48 hours.”

Sanger acknowledges the existence at some point of a leak, attributing it to a backed up and cracked drain, though he says it has been repaired*. “We came back and we thought we addressed it,” he said. “We do have appointments for repairs to fix the ceilings.”

Sanger added that Shamco was ready to work to rectify the damage in the rent-stabilized apartments that had been affected by the leak.

Promises to fix the leaks aside, McRae and Del Orbe say the damage has already been done to their apartments. Del Orbe said when it rains McRae comes to help her keep the water at bay. “When I see the weather report — I start to pray it doesn’t rain.”

McRae does not know what the next steps are but she wants to protect herself: “My home is my peace and my peace is gone. I am not able to sleep properly, I cannot shower, my floors, ceilings, walls, are all damaged—it has been an anxiety-inducing event.”

McRae said that she feels something more sinister is at play in the building where she has lived for over 15 years–namely that Shamco is trying to force rent-stabilized tenants like her out. “Julia, upstairs, has lived there for over 30 years. I have been here 15 years. Downstairs, Martina had lived there for 26 years. These families have raised their kids here and some their grandkids. [Shamco] wants my two-bedroom apartment to turn into a four-bedroom apartment and charge triple the rent.”

“How come only [rent-stabilized apartments] are being affected? Why is this only happening to us?” she said. “I have told this story so many times—this is not a new story in the city of New York.”

New York City’s rent stabilization system restricts annual rent increases at roughly one million apartments. Changes made to the system in the late 1990s create an incentive for landlords to promote turnover in rent-stabilized units: Owners can hike the rent substantially when a new tenant comes in, and when an apartment’s monthly rent rises past a threshold, the apartment leaves the stabilization system altogether, and the landlord can charge whatever the market will bear.

Shamco property management did say that most of the Washington Heights apartments affected by the leak were rent-stabilized but in an email Shamah Properties partner Alan Shamah said tenants were not offered any buyouts or being squeezed to leave.

“We buy buildings anticipating normal attrition and no tenants are ever approached for these things. I know there is much concern about rent stabilized tenants in NYC. One of the things we pride ourselves on are the many many tenants who have been with us for 20, 30 and 40 years. When I talk to them I tell them “You have to stay another 40 years,’ and we laugh,” he wrote.

Shamah Properties owns some 25 buildings in Brooklyn, Manhattan and in New Jersey serving an estimated 2,000 units, and the properties are all managed by their in-house management company Shamco, according to their investment portfolio.

City Limits first reported on the company in 2015, detailing accusations by tenants at a couple of their Brooklyn properties that the firm was trying to drive out rent-stabilized tenants. Shamco has denied those allegations.

Earlier this year, tenants at 1 St. Paul Court in Brooklyn organized with the Flatbush Tenant Coalition to file a complaint with the state’s Department of Homes and Community Renewal. The complaint would have allowed tenants to file an application for a rent reduction but required a inspection by the state.

In response, Shamah Properties filed suit against DHCR for an unwarranted inspection based on an unauthorized tenant complaint, according to court records.

According to Jane Li, staff attorney at the Community Development Project at the Urban Justice Center, the suit against DHCR is a tactic to discourage tenants from reaching out to community based organizations for help.

The case has been adjourned and is tentatively scheduled to resume in the fall.

Update Nov. 1: Shamco sent this statement to City Limits: Shamco denies allegations they caused a leak on purpose. All attempts to remediate unit repairs have been stalled by tenants not providing access to do repairs on multiple occasions even though access letters requesting appointments in advanced were mailed out using certified mail.

* Elements of the story were changed after initial publication to reflect that McRae had a bathroom leak that began in December and a separate leak in April which affected some of the rent-stabilized units, and to reflect the fact that Shamco’s contention now is that the leak itself has been repaired.

3 thoughts on “Wash. Heights Tenants Wonder: Is the Problem the Leak, or the Landlord?”