Opinion: Why We Disrupted a Public Hearing About the Homeless

By Helen Strom and Brenda Riley. 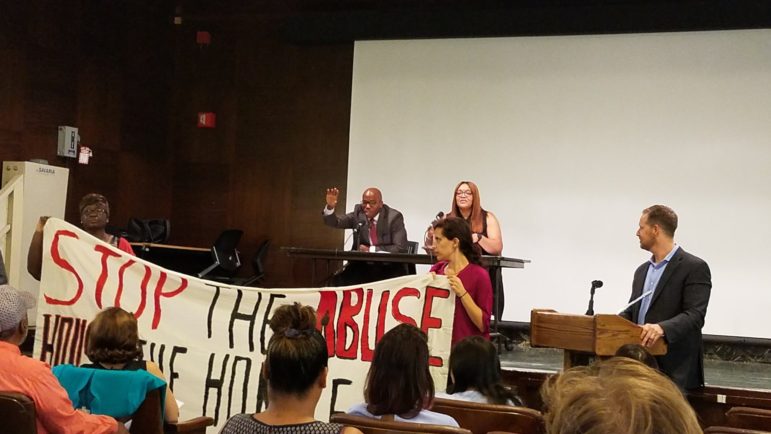 A scene from Wednesday’s public hearing.

The municipal building at 125 Worth Street is a daunting site. The architecture has an intimidating height, the façade is dated and dull, and the first sight for visitors upon entering is a metal detector and security guards. The building is best known to city residents as the site of Vital Statistics, where birth certificates can be retrieved. But the building also hosts hearings on proposed rules by city agencies.

On Wednesday, a group of people were stopped at the front door. They had signs calling on the city to halt its implementation of a rule requiring those who are employed and living in Department of Homeless Services (DHS) shelters to fork over 30 percent of their income to shelter staff, which would be placed into a city-run savings account and could only be accessed after 30-45 days of exiting shelter. They were eventually let in, but only after many of their signs were confiscated. Democracy.

The proposed Income Savings Program (ISP) would hold the threat of eviction (sanction) from shelter over the heads of homeless people if they didn’t provide a third of their income (“compliance”). As City Limitshas reported, the rule was requested by the De Blasio administration following the expiration of a 2010 law that included savings plans, but no threat of eviction. The 2010 law came after the Bloomberg administration’s disastrous and punitive rollout of a rent-for-shelter program in 2009 ; the demise of that rule came after brave homeless families spoke out against it and found allies in Legal Aid and state representatives.

Often, hearings on proposed rules are dry and the rooms fairly empty. But Wednesday’s hearing had dozens of individuals ready to testify – most of them individuals who had intimate experiences with DHS and social services in New York City.

In advance of the hearing, we decided that enough was enough. The Safety Net Activists, a group composed of people with personal experience with homelessness and poverty in New York City, decided not to stand passively or idly by as DHS passed a significant and punitive rule that would only put further pressure on people struggling to survive what for many is the hardest period in their lives. In recent years, we’ve watched as DHS’s administration has continued to shuffle around tens of thousands of people in shelter on the fly, against rules that govern transfers and with no accountability to people who live in shelters. We’ve watched as the De Blasio administration tightened the door to entering shelter for homeless families, making it even harder for them to get help. And we’ve watched as our fellow activists, our friends and family have faced arbitrary, cruel and abusive actions at the frontlines in the shelters. So we disrupted the hearing. Democracy.

After DHS staff members – neither Commissioner Banks nor Administrator Carter showed up to this crucial hearing – read the basics of the rule, we unfurled a banner and began a chant: “Stop the abuse! House the homeless!” Dozens joined in. For a moment, the room said “no!”in chorus. We quieted down as DHS staff members moved to have the hearing go forward, but explicitly allowed us to stand in front of the stage with our banner from beginning until end – the entire hearing was held as a simultaneous site of protest. Across the room, two police officers walked in, stood by the doorway, and stared at us. One by one, individuals testified to their experiences of trying to get by on low incomes while homeless: no kitchens to cook in, having to buy meals at work (food stamps don’t cover hot or prepared foods) instead of being able to prepare them, paying monthly storage bills to keep one’s belongings, having to pay countless small expenses incurred while homeless, each of which adds up too quick. There were over 20 testimonials, and not a single person during the entire hearing supported DHS’s proposal. Every single person and group spoke loud and clear against it.

We had spent hours democratically deciding what the banner we held would say. So what did we mean by “Stop the Abuse! House the Homeless!”?

Our call to “stop the abuse”resonated across our membership because the Safety Net Activists are composed of people who have experienced abuse in shelter – disrespect, rapid and unjustified transfers, sanctions to the street. We also meant financial abuse: the control of one’s money by an outside entity through coercive means (and holding basic shelter over someone’s head if they don’t comply with a rule is truly coercive). We also meant the generally abusive attitude and perspectives held by DHS administrators who view homeless people in paternalistic ways and put forth rules that place the burden of homelessness on poor individuals, while the same mayoral administration pursues housing and development policies that have further gentrified this city. The poorest city residents have found little reprieve in the mayor’s affordable housing plan. It is by no means lost on us that most people in shelters who would experience this punitive rule are people of color. We would be remiss not to point out that Bill Clinton’s disastrous welfare reforms in 1996 were based explicitly on centralizing the “personal responsibility” of poor people, rather than an obligation on the part of government to support those unable to make the market work for them.

Our call to “house the homeless” gets at this point. The issue is housing: truly affordable low-income housing, and rental subsidies that actually pay market rents – which the De Blasio administration has refused to sufficiently invest in. Contrary to the administration’s claims of breaking the “trajectory” of homelessness, DHS’s own data shows the family census again on the rise, as the number of singles in shelter have been rising for years. The true number of literally homeless people in New York City is nearly 80,000. And while the city has taken some steps forward, there is much more that they could be doing. Homeless New Yorkers and advocates have put forth detailed proposals for how the city could utilize and develop vacant land, make more city-subsidized affordable units available to homeless people, and increase rental subsidies so that homeless families can actually obtain housing.

The two of us unfurled this banner and disrupted the hearing because of our personal experiences. Brenda is a mother and grandmother with children and grandchildren in the shelter system. Her family has not been able to exit shelter due to the low amounts that city rental subsidies pay, which don’t meet market rents in New York City. Since becoming homeless, her family has faced illness and trauma, and been repeatedly threatened and bullied by shelter staff. She has watched as the De Blasio administration has refused to invest in truly affordable housing, meaning her children and grandchildren continue to live in very difficult circumstances everyday. Helen has advocated for years with poor people trying to get by on public assistance grants and trying to survive the shelter system. She has known far too many people who have experienced shelter sanctions, many working people who struggle to get by with the added expenses that come with being homeless, and many people who have been treated unfairly by punitive policies and practices in the city shelters.

We would also be remiss not to point out that the city is proposing this rule in compliance with a state law that passed this past budget cycle. However, the idea that this is simply the city complying with the law is hard to believe when we know that the city administration requested this rule change. Still, we also know this is also part of Governor Cuomo’s increased attempts to squeeze homeless people and shift blame on them when it’s convenient – for example, in an array of proposed changes to regulations governing the shelters, or his approval of the shelter savings requirement. Cuomo has presented himself as progressive on issues facing the homeless. But whether it was his decision to defund rental subsidies for homeless people in 2011 – which caused the city’s homeless population to skyrocket – or blaming the homeless for deteriorating conditions on the subways, as opposed to providing the investments needed to fix them, the governor is ultimately conservative and punitive as regards homeless people.

So what now? First, the city needs to halt the implementation of this rule. The city can request a waiver if it so chooses. It can also push back publicly against the governor and decry an approach to homeless services that reinforces blame of poor people for their poverty. City Council can pass a resolution admonishing this approach to homeless services. We were happy that Councilmember Steven Levin – chair of the General Welfare Committee of the Council – was at the hearing and testified passionately against this proposal. He can choose to be a champion here by putting forth such a resolution and looking for other ways the Council can stop this rule from being enforced.

At the state level, the laws allowing people to be charged rent for shelter or that require them to save earned income must be repealed. We were happy that Assemblymember Andrew Hevesi was at the hearing and testified against the rule, and that he stayed throughout the hearing to hear the testimonies of others. He can choose to be a champion for homeless people on this issue and work to get these offensive laws repealed.

New York City’s affordable housing crisis has produced and maintained mass homelessness. Blame and burden for mass homelessness should not be placed onto homeless people, but on the policies that prevent New Yorkers from obtaining housing in our increasingly unaffordable city. In the final analysis, bureaucratic changes that add pressure to homeless people, like mandating savings of earned income, will not reduce homelessness – only housing that poor and working class people can afford will do that. Both the mayor and the governor need to step up to the challenge and make that happen. Paternalistic and punishing policies aimed at homeless people are not the answer.

Helen Strom and Brenda Riley are both part of the Urban Justice Center’s Safety Net Activists.

2 thoughts on “Opinion: Why We Disrupted a Public Hearing About the Homeless”