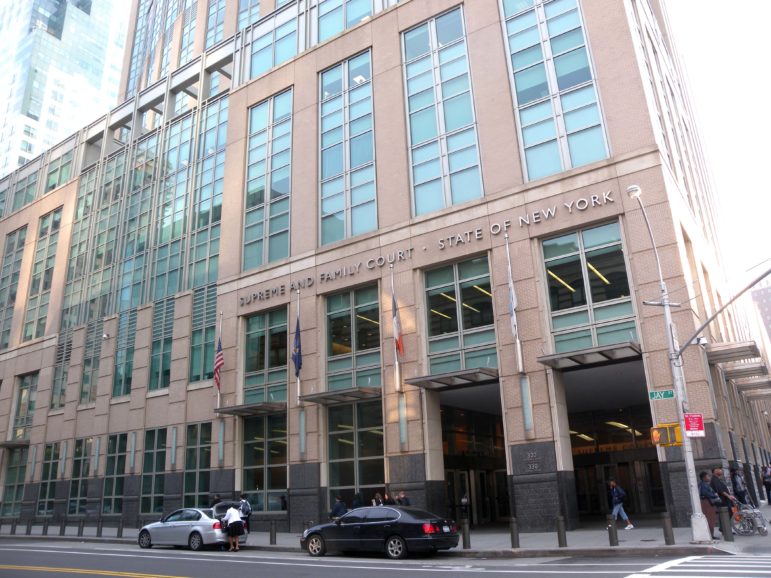 The Supreme and Family Court Building in Brooklyn.

Last week many committee members received a phony letter from Assemblyman Bobby Carroll urging them to hand over their vote by proxy to party boss Frank Seddio. Meanwhile, a Daily News editorial highlighted Seddio’s ballot “shenanigans” regarding judgeships, the results of which will play out at Thursday’s meeting.

In the wake of their primary wins two weeks ago, last week three civil court judges were named by the Democratic party’s judicial convention to the Kings County Supreme Court. That move opened up three ballot lines for new civil court candidates to run in the general election. Unless last-minute challengers appear at the county committee meeting, Seddio and his inner circle essentially will anoint three judges.

Such slippery ballot line maneuvering means that those judges won’t face primary challengers who might raise questions about their track records. Yet the likely nominees merit scrutiny.

Anne Swern, slated for the Civil Court district one line (elected by voters in Downtown Brooklyn, greater Park Slope and Bay Ridge), is a familiar name given her campaign for Brooklyn DA last year. A former high-ranking executive in the DA’s office under Joe Hynes, Swern was initially seen by many observers as a viable contender in the 2017 race. But neither Hynes nor the party machine supported her campaign, causing Swern to finish a distant second.

In her DA campaign, Swern touted her credentials as a criminal justice reformer, pointing to her pivotal role in the Hynes administration’s drug treatment courts that created an alternative to incarceration. John Pfaff, Scott Hechinger and other leading criminal justice advocates endorsed Swern because of her policy bona fides.

Because her campaign failed to take off, Swern’s influential role in various Hynes era controversies never came to light. Swern’s name, however, showed up several times in the city’s Department of Investigations (DOI) 2014 report regarding misconduct in the Hynes administration.

As seen in the report, during Hynes’ bid for reelection, Swern and other members of the DA’s inner circle used their office email to discuss campaign strategy. Although Hynes sent “several thousand campaign-related emails” from his official email with administration staffers including Amy Feinstein (his #2-ranking executive) and Swern (#3), nobody in the DA’s inner circle appeared able to stop such illegal activity.

In response, Swern tells City Limits that “the DOI report is five years old” and the unlike many others named in it, she has not been charged by the Conflicts of Interest Board with misconduct. She notes that a judicial screening panel rated her as qualified (Seddio has close ties to that panel). Swern also says that the “Brooklyn electorate vetted me last year—and 18 thousand voters supported my campaign for DA.”

The DOI report also shows that Swern regularly gave campaign advice to Hynes, and in one specific exchange she focused on how the DA should respond to the issue of wrongful convictions that dominated the 2013 campaign. In response to the charge that Hynes had condoned prosecutorial misconduct, Swern suggested that Hynes give the following response at a candidates’ forum: “Hindsight produces 20/20 vision and of course looking back we could have done things better, but given what we knew at the time—there are no specific examples.”

Swern herself was directly involved in one of the most controversial cases of the Hynes era, that of John Giuca. While at Rikers in 2005 awaiting trial for the murder of Fairfield University football star Mark Fisher, Giuca allegedly confessed to fellow detainee John Avitto, who had a drug problem. Swern promptly told her deputies at the treatment courts “to mark [Avitto’s] case for special attention.”

In 2015, Avitto recanted his statements regarding Giuca, and earlier this year an appeals court overturned Giuca’s conviction because the prosecution concealed the favorable treatment Avitto received from the DA’s office in exchange for testifying. Swern says that “‘special attention’ did not mean ‘special treatment.’ I was just trying to make sure the case didn’t fall through the cracks.”

The DOI report also highlighted Hynes’ administration’s dubious use of civil asset forfeiture funds to pay for campaign consulting. As the office’s #3, Swern should have been aware of the payouts of over $1m in asset money that had been funneled to Hynes’ consultant Mortimer Matz over the preceding decade. “I had nothing to do with that,” Swern insists.

All of Swern’s campaign work for Hynes, as well as involvement in wrongful convictions, would be fair game for debate if she faced a primary in the judge’s race. But with the full support of Assemblywoman JoAnne Simon and her allies at Central Brooklyn Independent Democrats (CBID), Swern stands to receive a free pass from Seddio to a judgeship.

Jill Epstein is the likely nominee for Civil Court district four (elected by voters in greater Crown Heights and Brownsville). When she first ran (unsuccessfully) for civil court judge in 2014, it was reported that Epstein had been admonished by courts in both New York and New Jersey for her improper handling of financial information.

In her second unsuccessful bid for civil court judge two years later, Epstein made some curious money moves. On 2/26/16, a Florida-based entity named Sales and Marketing Innovation LLC loaned $250,000 to Epstein’s campaign. The address traces to a residence in Boynton Beach, Florida. After she lost the primary in September, Epstein then refunded the $250,000 to the LLC and loaned her campaign $160,000 of her own money (nearly all of which her campaign later “forgave.”).

What is clear in Epstein’s filings is her close ties to Clarence Norman, the former Democratic Party boss that DA Hynes sent to prison for campaign law violations. Since returning to Brooklyn in 2011, Norman has steadily regained influence over the party’s decision-making. In her 2016 race, Epstein steered over $60,000 to consultants Musa Moore and Peter Weiss, Norman’s longtime close allies. Epstein could not be reached for comment.

The third civil court judge will run on the county-wide ballot line—meaning the nominee will be chosen by Democratic district leaders (rather than the county committee). One name in the mix is Rupert Barry, who has also lost twice in recent previous primaries for judge. In his 2017 campaign, Barry retained the services of Musa Moore and hit the stump with Assemblyman Bobby Carroll and Central Brooklyn Independent Democrats veteran Jim Brennan.

At Thursday night’s meeting, Carroll and others from CBID are expected to back Seddio against challenges waged by New Kings Democrats regarding party leadership positions and voting rules. The reformers (CBID) are thus backing the old guard (Seddio and Norman) against the insurgents (NKD). Meanwhile, three judges will be placed on the ballot without substantial debate or vetting.

That may sound like democracy as usual in Brooklyn, but what’s different this time around is that many more people are participating in the county meeting. Thursday night likely marks the first battle of the 2020 elections.