CityViews: Residents, Not Investors, Revitalized Mott Haven. Displacement, Not Progress, is What They Fear 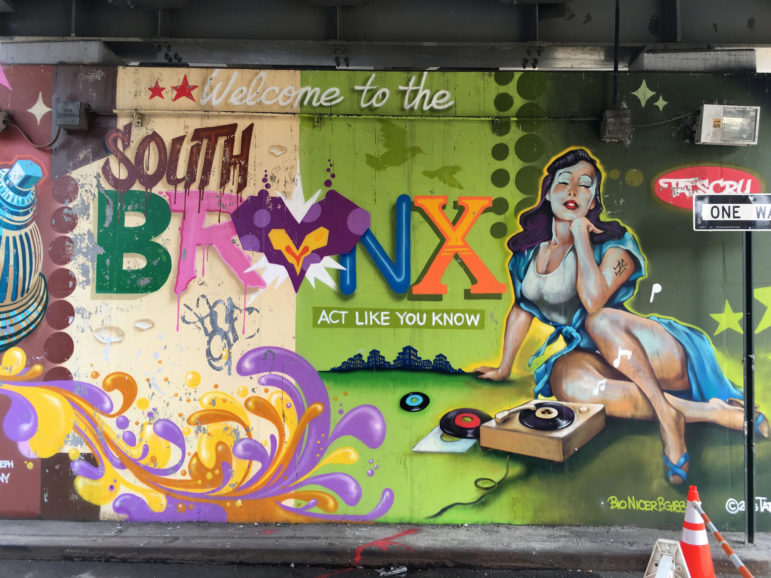 In a CityViews piece posted on February 16, 2018 titled “Revitalization, Not Gentrification, is What’s Coming to Mott Haven” the author states that there is a campaign of fear mongering and misinformation when it comes to the topic of gentrification of the area.

Sadly, the only misinformation going around is that very piece written to champion gentrification where it is quite evident that the term means something completely different to the author than what it means in the real world.

Revitalization began decades ago through community based groups throughout the South Bronx even as the fires still continued to burn.

From Banana Kelly in Longwood, who took over buildings the city wanted to demolish during the late 70s but instead rehabilitated them for housing for local residents, to Nos Quedamos in Melrose who battled a city plan to demolish large swaths of the neighborhood and instead created one of the most studied urban renewal and revitalization projects in the country, revitalization was in full swing years before the current crop of private investors turned their attention to those neighborhoods.

Block after block in Mott Haven, where buildings once stood abandoned during the 70s and 80s, were imbued with new life as new families moved in. New single- and multi-family homes went up on formerly vacant lots where weeds and rubble once stood. All of this happened thanks to late New York City Mayor Ed Koch and his administration working together with non-profit and for-profit developers alike which resulted in the creation or rehabilitation of 180,000 units of housing across the city to the cost of over $4 billion dollars of the city’s capital funds.

All of this has been happening over the course of over 40 years, so revitalization is not something new or that’s coming: Revitalization already happened.

And this is where we stand today.The once forgotten, neglected, and left to die borough of The Bronx, rebuilt through the sweat and tears of the residents who refused to leave their homes and neighborhoods, now stands a victim of its own success.The Bronx is no longer, at least to most minds, the scary borough you shouldn’t go to or, *gasp*, live in.

The Bronx is now a place where everyone wants a piece of the action, as evidenced by the grandiose plans for thousands of market-rate waterfront apartments planned by Somerset Partners and The Chetrit Group in Port Morris.

As for the affordable housing going up on 138th Street alongside the market-rate condos the author mentions—the ones that “…community groups and bloggers…purposefully ignore”—well that’s not the case.

What the author conveniently leaves out is that although three of those buildings are “affordable” housing developments, the fact is these units are not intended for local residents who truly need it.

What the author ignores is the fact that the Area Median Income, aka the AMI, used to determine who can live in these buildings shuns the majority of local residents who need such quality and affordable housing the most.

Take The Graham at 255 E 138th Street, which is going up alongside the aforementioned market-rate condo.

The current median income for Mott Haven is $19,400 for a family of four, however, out of 87 units at The Graham, only two units are available that would serve the typical family living in Mott Haven. These two studio units are for individuals making $14,503 to $20,040 a year, which is at 30 percent of the AMI.

Clearly, these units are not affordable to the local residents. Furthermore, the author neglects to mention that even those “affordable” units aren’t permanently rent restricted. Once the restrictions expire, the units can turn into market-rate apartments.

In fact, last year a study released by the Association for Neighborhood & Housing Development indicated that, in The Bronx, 7,928 units are eligible to lose their LIHTC (Low Income Housing Tax Credits) between 2017 and 2023. Some 557 of these units are located in Community Board 1, which covers Mott Haven and Melrose, and once they expire, the units are in danger of going market-rate—especially in a hot market like the South Bronx.

These figures don’t include the 6,794 Bronx units that are already known to be at risk of losing federal Department of Housing and Urban Development (HUD) subsidies, of which 640 are in Community Board 1. The number of at-risk HUD-subsidized units will certainly have increased with the recent budget cuts by the Trump administration to HUD. According to ANHD, such HUD-assisted households will see an average increase of $890 in their rents in New York State if those cuts go through.

The NYU Furman Center, in a report issued in 2016, identified Mott Haven (along with Port Morris, Melrose, Longwood, and Hunts Point) as a gentrifying area where rents have increased between 2000 and 2010-2014 by 33.2 percent. The report further states that income dropped by 12.6 percent during that same time period.

Those numbers are not describing revitalization. They are indicating gentrification.

Speaking of HUD budget cuts, this brings us to the worries that nearby public housing residents in NYCHA have about being displaced.

We all know that NYCHA is woefully underfunded and the costs to make necessary repairs are astronomical. Those federal cuts will also further weaken public housing in New York City, so although residents have had fears for decades that the “projects” were going to “go condo” and they’d be pushed out, the new proposed budget will not only stoke those fears but push residents closer to reality of being forced out by government designed in simply abandoning funding for public housing.

Not quite sure what NYCHA residents are going to do with new street furniture coming to 138th and 3rd Avenue next to their buildings. Hopefully they won’t have to sleep on it as conditions worsen.

Those in support of gentrification would like you to believe that the neighborhood is simply tabula rasa waiting for developers to build upon it and gentrifiers to “discover” this “new” area but the fact is that Mott Haven and the South Bronx aren’t new and haven’t gone anywhere.

Between Willis Avenue and the Third Avenue Bridge along Bruckner Boulevard, the housing stock is not mostly new as the author describes.

What is new, however, are the businesses in the area that once was known as the antique district of The Bronx, where dozens of shops once catered bargain hunters of such furniture.

Only one antique store remains, as they were pushed out by escalating rents and replaced with galleries and trendy boutiques, cafes and other businesses, several of which are backed by Somerset Partners in an attempt to create a fake community.

These businesses are used as props to lure investors into thinking that the area is the next hip spot but again, this isn’t the case.

The reality is that these businesses are generally empty and if it weren’t for the backing of billionaire developers, they would have been closed by now like any other small business that doesn’t have sufficient foot traffic.

As for the Clock Tower, the building opened up as 95 loft residences in 2002 not less than 10 years ago, as the author claims. This is a building that has an almost 20-year history as a residential building in the area. Back then you could rent units for as low as $900. Now, most of the original pioneering residents have been displaced and who knows what will happen with the building’s new expansion with two new luxury buildings including an indoor swimming pool and rents starting at $1,834 to the low $2,000s for studio units and up to $4, 469 for three-bedroom units.

But that’s not gentrification, is it? Luxury housing in the poorest congressional district in the nation?

Being against gentrification isn’t being against progress or development. It doesn’t mean that one wants to keep a community in so-called poor conditions or its residents in poverty. We are all for uplifting residents from poverty through providing better access to education and training for the necessary skills for higher wage jobs.

No one can argue that mixed-income neighborhoods aren’t a good thing. Having mixed incomes alongside each other with access to the same amenities regardless of socioeconomic background is an ideal but we have yet to figure out how that can be achieved, or rather put into practice, without causing displacement of residents and businesses.

We love our small businesses in The Bronx and support them. Sure, there are several that have been boycotted for various reasons. Some aligned themselves with the very developers that will displace the community that made those business a success. Others have aligned themselves with corporate greed as is the case with FreshDirect’s controversial move to the South Bronx, which brings with it thousands of truck trips through our already congested streets, contributing to the worsening of what are already some of the highest rates of asthma in the nation.

Are we supposed to support such a business simply because it is owned or run by Latinos, as the author writes? The author also forgets to mention that some of these very businesses are being supported directly or indirectly by the developers seeking to change the landscape of the area or they simply are pro-gentrification.

Our small businesses are the backbone of our communities. They are gateways to the middle class for many families and put their owners’ kids through college. A lot of these businesses have disappeared from the area like the antique shops that once dotted Bruckner Boulevard.

I’ll leave you with the following quote from a Wall Street Journal article that came out last week: “Mott Haven reminds us of SoHo 30 years ago and, similarly, Dumbo 15 years ago,” said Robin Schneiderman, a managing director of Halstead Property Development Marketing.

In a market analysis, Mr. Schneiderman predicted a “rapid gentrification.”

That pretty much sums up what is happening in Mott Haven and it isn’t revitalization. That was phase one, and we’re long past that stage.

Ed García Conde is the founder and editor of Welcome2TheBronx.

24 thoughts on “CityViews: Residents, Not Investors, Revitalized Mott Haven. Displacement, Not Progress, is What They Fear”