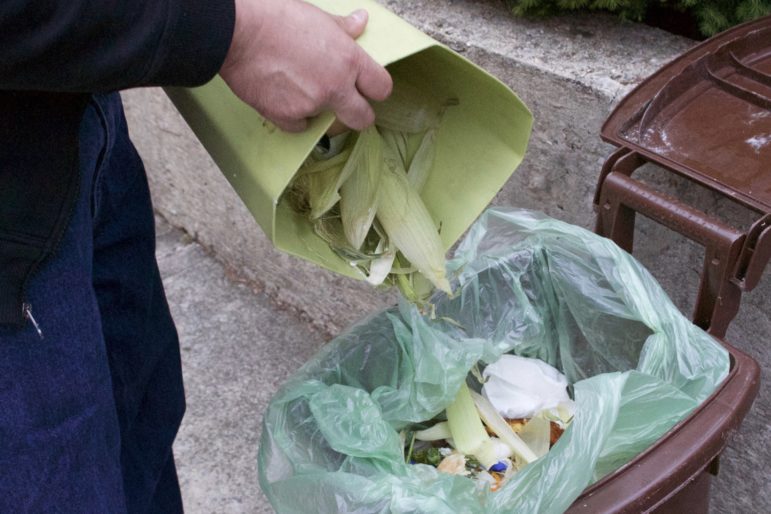 In 2016, the city expanded its Curbside Collection Program to Queens Community Board 11, allowing residents who want to recycle their food waste to leave it at the curb for the Department of Sanitation to pick up.

But last summer, residents of CB11 — which includes the neighborhoods of Auburndale, Bayside, Little Neck and Oakland Gardens — had their organic collection reduced from twice to just once a week, as DSNY scaled back its formerly ambitious composting program due to space and logistical issues, a spokeswoman said.

Now the board is asking the Sanitation Department to reinstate twice weekly pick-ups, reporting that fewer residents are participating in the program since the collections were reduced. Some residents complained about food waste sitting in their cans for a full week, and animals getting into the cans and spilling trash into the street.

“Some people said that in the warmer months that they were concerned because the food would lay around for the whole week when it went back to one collection,” says Henry Euler, who chairs CB11’s Environmental Committee. “[It] would start to smell and that kind of thing and they thought it’s attracting the raccoons and other wild animals even more because of the odor coming from the containers.”

The board says that since the pickups were reduced, fewer residents are participating in the composting program, instead just putting their food scraps into the regular garbage.

“Joe Marviliano, our district manager, reported that we had very high compliance rate when they collected twice a week. But when we went to one collection a week our compliance rates went down,” says Euler.

“We are trying to cut down on the garbage that goes into the landfills so it seems better if they come twice a week and maybe people will go back to do the organic recycling routine,” he adds.

Dina Montes, a DSNY spokeswoman, says the food scrap pickups were reduced in certain neighborhoods because of the capacity of the trucks used there.

“We have tested different service frequencies, along with different types of trucks, to determine what provides the most efficient and effective service for all. Some areas of the city were served with one truck collecting organic material and trash, in the same (dual bin) truck, twice a week. However, that meant that there was less space for some big, bulky trash items such as couches and mattresses,” she told City Limits in an email. “Additionally, our research showed that most residents were participating in the organics collection program once per week, generally on their recycling collection day.”

Last month, the de Blasio administration announced that it plans to eventually expand organics collection citywide, and to make participation mandatory as part of the mayor’s Green New Deal for the city. DSNY did not provide a timeline for when that might happen, noting it will have to work with the City Council to establish such a program.

In the meantime, DSNY has been exploring ways to reach more residents about opportunities for composting, including through community events and by hosting more than 150 food scrap drop-off sites across the city where residents can bring their compost waste, according to Monte.

The Organic Curbside Collection was started in Staten Island in 2013 and has grown in the last five years to serve 3.5 million residents, making it one of the largest organic curbside collection programs in the country, according to DSNY. Over the last few years, the amount of organic waste collected through the program has more than doubled, from 13,000 tons in 2016-2017 to 30,000 tons the following year.

“We continue to work in educating and reaching all NYC residents about organics recycling, as the program is new to many city residents,” Montes says.

One thought on “City’s Reduced Compost Pickups are Rotten, Says Queens Board”