By Jonathan Gomez and Jarrett Murphy . 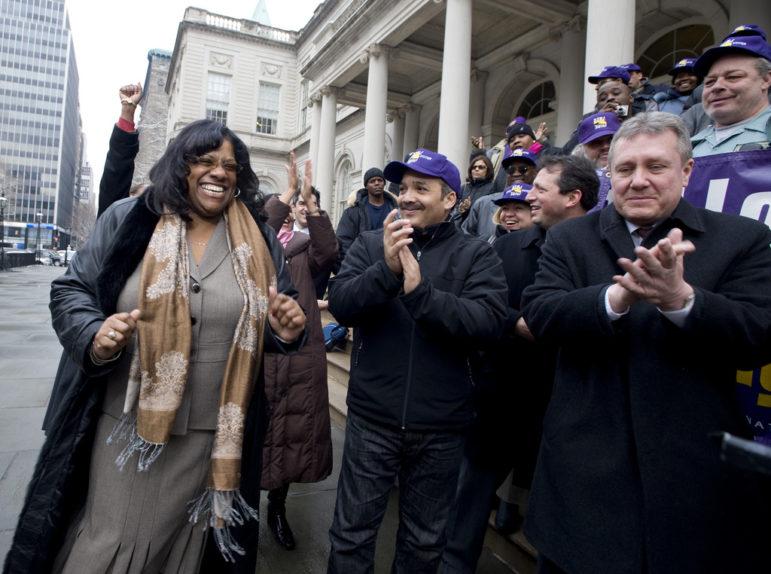 William Alatriste for the NYC Council

Staten Island Democrat Deborah Rose at a 2010 rally outside City Hall. Kamillah Hanks is mounting a serious challenge to the two-term incumbent.

In recent years the North Shore has become the focal point of development and rezoning on Staten Island. The emerging, new-look waterfront will eventually include the much anticipated New York Wheel, the Empire Outlets mall, the existing URBY luxury apartment building and, possibly, the rezoning of the Bay Street corridor.

A lot is coming to the area. And next week’s Democratic primary for the local Council seat could turn on whether voters feel local residents are getting enough out of the development deals.

Councilwoman Deborah Rose, who made history in 2009 as the first Black elected official from Staten Island, is being challenged by another Black woman, Kamillah Hanks—who pulls no punches in her criticism of the incumbent.

“Development and rezoning are important, but this community has had to deal with so many other issues prior to these projects, and as a councilwoman, I would have thought that Debi Rose would have looked at how they would benefit from these developments,” says Hanks, who is the former executive director of the Downtown Staten Island Council and founded the Historic Tappen Park Community Partnership.

In her campaign literature, Hanks expresses doubts about planned development but also voices frustration that promised development hasn’t materialized—in particular the fact that the Wheel is “$300 million over its initial budget and a year past its original deadline,” which she blames on Rose. “The wheel project stalls while our current Councilwoman buries her head in the sand.”

“I’m committed to responsible development,” reads Hanks’ website. “I’ve watched projects fail, I’ve seen our residents left out of job sites, I’ve seen the disregard for our community, and this ends when I’m elected.” Asked by City Limits to clarify her position on the Wheel, Hanks said that she supported it initially, that her enthusiasm has waned as the project dragged on and the community was left out of crucial design decisions—but that she still wants to see it built.

Hanks is not the only critic Rose has faced this summer. A recent City & State feature ranked her 46th out of the 51 City Council members in New York City, in large part because of her poor attendance. Rose has attributed her absences to medical issues. In a statement sent to City Limits, Rose called the rankings “flawed” and adamantly defends her tenure as the district leader

“I invite anyone who would like to join me to take a tour of the North Shore and see, after decades of stagnation, a new energy, with new and renovated parks, two new schools, one school expansion and a school about to be built, two new libraries, hundreds of miles of newly paved roads and thousands of high-paying jobs boosting quality of life to its highest level in a generation,” the statement read. “I am proud of the work I have done, and I look forward to continuing this progress in my third term,”

A longtime community activist, Rose ran in a 2009 special election for the 49th district after Michael McMahon vacated the seat to enter Congress. She lost by 350 votes out of 11,000 to Kenneth Mitchell, whom she defeated in a primary later that year before cruising to a general election victory. She was handily re-elected in 2013. Rose sits on the Aging, Civil Rights, Education and Transportation committees and chairs the Committee on Waterfronts, which has met only twice this year, less than virtually all other Council committees.

Over her nearly eight years on the Council, Rose has introduced 29 laws and seen nine adopted. The most recent became law last summer and required the NYPD to produce an annual report indicating how many cops in each precinct have had multiple substantiated Civilian Complaint Review Board complaints or other disciplinary black marks in recent years. That measure likely didn’t please the Patrolmen’s Benevolent Association, which endorsed Hanks.

Hanks welcomed the endorsement, noting the rising toll of drug overdoses in the area: “Police officers in our city have some of the toughest jobs, but they do it with pride. They keep our streets safe and are helping to fight the terrible opioid epidemic that we are battling.”

Both candidates qualified for the maximum public financing available in a Council primary–$95,095—-but Rose raised more in private funds and Hanks has spent more heavily, so the incumbent had at last report just shy of five times as much money on hand as her challenger.

A third Democrat, Phil Marius, was bumped from the race because of a petition challenge by an associate of Hanks’ attorney, Richard Luthmann, according to the Advance. (Luthmann is the operative whose fake Facebook posts, intended to damage political enemies, feature in Friday’s New York Times.)

Both Rose and Hanks will be on the general election ballot regardless of who wins the primary: Rose is the Working Families Party nominee and Hanks has the backing of the reform party.

The North Shore is among New York’s least dense community districts, and according to the Furman Center’s annual State of New York City Housing and Neighborhoods, it boasts the highest rental vacancy rate in the city. But residential sales volume is brisk and more than a third of households are severely rent burdened—meaning half or more of their income goes to rent. Local advocates say fears of gentrification and displacement are palpable.

Hanks argues that Rose has not dogged developers as much as she should have. “From the moment I entered this race I asked the question, why is she rushing these projects when she has been absent in her other duties as a councilwoman?” Hanks says. She says she is not against development: “I do think that residents want these projects, but right now they feel that their quality of life, their neighborhood, their district is moving away from them and the needs they have always had.”

But Rose points with pride to the community benefits she says she won as part of the development deals, including a $1,000,000 traffic mitigation fund, support for minority- and women-owned businesses and 100 percent union hiring for The Wheel and Outlet Mall. She says the projects are a “win-win.”

Developments like the URBY as well as the Lighthouse Point will make 20 percent of their units affordable for New Yorkers earning 60 percent or less of the area median income, she says.

Perhaps the biggest question mark hanging over the neighborhood is the potential rezoning of the Bay Street corridor. Hanks tells City Limits she won’t support a rezoning until the city commits to funding infrastructure improvements. “We cannot build up and welcome new residents when the current transit system and the school system is dealing with extreme delays and overcrowding.” She blamed Rose for being absent from the rezoning discussion.

For her part, Rose says, “As I have said many times, we will not increase density without the infrastructure in place to support new residents. Regarding affordability levels, my priority has always been that newly rezoned areas would provide housing for a mix of income levels.” She wants the rezoning to approve mandatory inclusionary housing with affordability option 1, under which 25 percent of new units would be reserved for households who incomes average 60 percent of area median income, or $46,620 per year for a family of three).

With the September 12, primary bearing down both Rose and Hanks will also focus on some of the districts other pressing issues like traffic, transportation and overcrowded schools—each of which has the potential to become increasingly worse with the influx of residents to the North Shore. Rose has supported studies to relieve traffic congestion in the area but in a June 30 report by the New York Times, the North Shore still ranked as one of the worst areas of the city for traffic, at least as far as its residents are concerned.

There were concerns late this week that the machinery of the election could become as big a story as the candidates and issues. Bertha Lewis of the Black Institute contended in a statement issued Thursday that the Board of Elections had relocated a number of poll sites in minority neighborhoods, a move she labeled “voter suppression.”