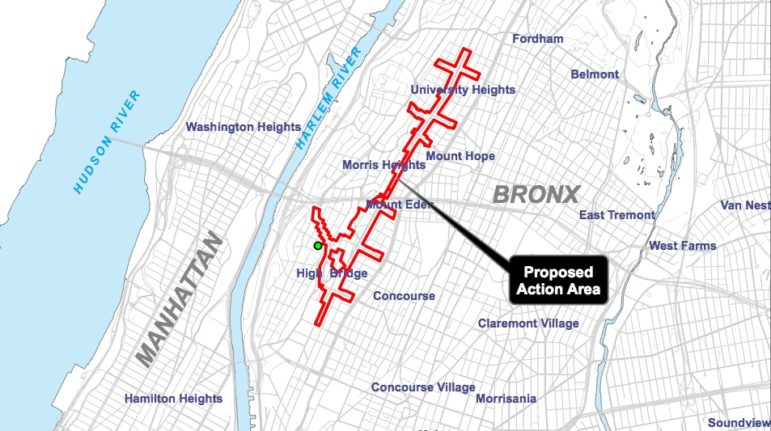 A decade of development under a proposed de Blasio administration rezoning will result in a gain of more than 9,500 residents, upwards of 3,000 apartments and some 3.2 million square feet of residential space to the Bronx’s Jerome Avenue corridor. But it is unclear how many jobs currently located in that area will be displaced.

That’s according to the document released on Wednesday by the Department of City Planning: a draft scope for the environmental review that is required before the proposed rezoning, one of 15 neighborhood redevelopment initiatives contemplated under the mayor’s housing plan, can begin the city’s Uniform Land Use Review Procedure.

During the environmental review, consultants will assess the impact of the project on job displacement, as well as public schools, transit, and more. Public comments on the draft scope can be filed until 5 p.m. on October 10 by writing to Environmental Assessment and Review Division, New York City Department of City Planning, 120 Broadway, 31st Floor, New York, New York 10271-3100, Robert Dobruskin, Director RDOBRUS@planning.nyc.gov. There’ll be a public hearing on them Thursday, September 29, at Bronx Community College’s Gould Memorial Library Auditorium, 2155 University Avenue in the Bronx, starting at 4 p.m. There will also be an informational session on the scoping process Thursday, September 8, 2016 at 6:30 p.m. at Davidson Community Center, 2038 Davidson Avenue in the Bronx. To attend, RSVP to JeromeAvenue@planning.nyc.gov or at (718) 220-8500.

The Jerome Avenue rezoning would cover an area of roughly 73 blocks and 151 acres. It would introduce residential zoning to parcels currently set aside for commercial or industrial activity, increase density in some existing residential areas and change the ground-floor commercial mix in key parts of the area from auto-related businesses to retail and entertainment. The proposal also calls for the creation of a special zoning district to govern building styles near the elevated four train, and the remapping of a couple parcels to create a small park.

The new apartments would fall under the Mandatory Inclusionary Housing rule, meaning some portion of the development would be required to charge affordable rents for targeted income groups. The exact number of such apartments and the mix of groups they would serve would be determined by the City Council and the decisions of individual developers.

The proposed rezoning along Jerome Avenue elicited an energetic and well-organized response from community groups in the area, who produced their own vision for what a redeveloped Jerome Ave. corridor ought to look like. Those groups were still reviewing the draft scope on Thursday.

The draft scope offers much to absorb but a few highlights—and points for possible debate—stand out.

The zoning proposal has been crafted to promote new development specifically along major corridors that currently contain very few residential units. Residential areas in the surrounding neighborhood are not being rezoned to allow for greater density, in recognition of the existing character of these residential areas, and the rezoning will not promote additional development in these areas.

Second, the administration says it is listening to neighborhood desires to preserve some of the blue-collar businesses:

These areas include a number of auto-related businesses ranging from auto repair, auto glass, audio sales, tire shops and parking facilities both surface lots and structured garages. Many of these businesses have been in existence for decades and during the outreach process community stakeholders identified a goal to preserve areas for these businesses to remain and expand. The proposed actions identify areas for growth and development to facilitate new residential, commercial and community facility uses. Four areas within the study area boundary were designated for no changes to the existing zoning to support the preservation of these unique businesses in the study area. These areas were carefully selected based on the number and types of businesses, locations off major street and unique site conditions that would impede redevelopment.

And third, it argues more than once that the zoning changes are only part of the larger Jerome Avenue Plan, although those other elements wouldn’t be codified in the same way:

… it is the Plan’s overarching strategies, coordinated investments, custom service delivery programs, among other elements, that all work with the land use actions and zoning changes to fulfill the neighborhood vision identified through the Jerome Avenue Neighborhood Plan.

The draft scope looks out 10 years to gauge what will happen if nothing changes versus the scenario of the rezoning taking place and identifies 45 sites in the area where development is likely to occur over that decade.

Without a rezoning, the document predicts modest development in the area, including “approximately 780 residential units with no guarantees for affordability,” whereas with the rezoning there are likely to be 4,030 apartments built, “a substantial proportion of which are expected to be affordable,” creating housing for 11,788 new residents. Altogether, City Planning’s prediction is that the rezoning would result in 3,250 more apartments and 9,500 more residents compared with the “no-action” scenario.

City Limits coverage of housing and development is supported by the Charles H. Revson Foundation and the New York Community Trust.