Getting Real About Resilience in South Brooklyn 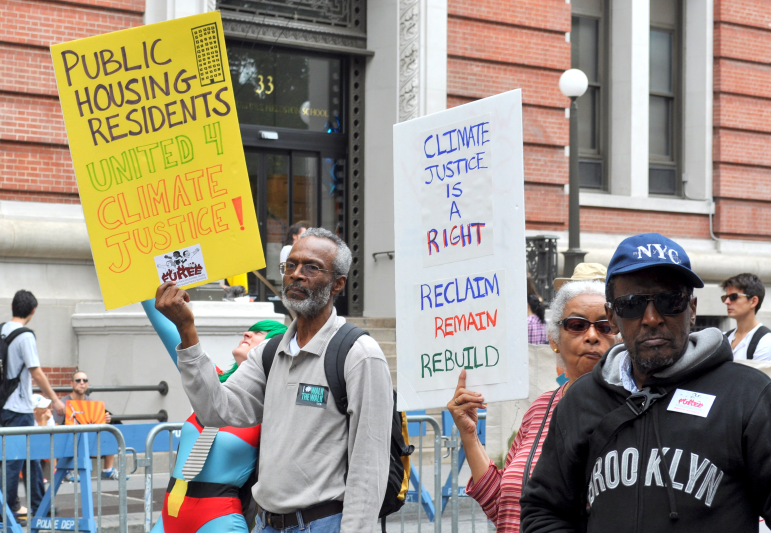 Residents of South Brooklyn recognize that resilience will provide better, but not total, protection. So they are also organizing to reduce the risk of catastrophic climate change.

Beverly Corbin is disabled; she navigates the courtyard at Wyckoff Gardens—the South Brooklyn public housing complex where she lives—on a scooter. But that didn’t stop her from mobilizing to help her neighbors when Superstorm Sandy hit in 2012. “I took hot meals to the building on my scooter,” she said in an interview. “People would grab the meals and run up the stairs with them. I carried water on the front of my scooter.”

Corbin’s response to Sandy says a lot about the prospects for resilience in a changing climate. The challenges, of course, are huge. Corbin’s neighborhood, like many low-income urban areas, is dealing with climate impacts layered on top of other, long-standing problems— poverty, industrial pollution, the legacy of racist housing policies. A map that charts geographic and social vulnerability shows that much of South Brooklyn is at serious risk for a Katrina-like disaster.

But Corbin shows us what the maps can’t capture.

For one, her neighborhood has a tradition of community self-help, which was a lifeline after Sandy. When a 14-foot storm surge inundated South Brooklyn, some public housing residents went without water, heat, and electricity for more than two weeks. Corbin and her neighbors rallied to provide food, clothing and shelter to those in greatest need.

“It was an amazing community effort,” says Karen Blondel, who lives in a Red Hook public housing complex. Blondel could have evacuated before the storm, but chose to tough it out so she could look after her elderly neighbors. “I just couldn’t leave them,” she said.

Nor do the maps show that South Brooklyn is home to some powerful organizers, like Corbin and Blondel, who are using the post-Sandy rebuilding process to make transformative changes in their neighborhoods. As public and private money flowed in after the storm, organizers launched an initiative called “Turning the Tide” to make sure that low-income public housing residents have a say in in how that money is spent.

“People try to come in and tell us what we need, and what we think,” said Blondel, “but we’re the experts.”

Led by the Fifth Avenue Committee, Turning the Tide is a collaboration of the Red Hook Initiative, Families United for Racial and Economic Equality, and the Southwest Brooklyn Industrial Development Corporation, in partnership with New York City Housing Authority (NYCHA) . Its goal is to amplify the voices of low-income South Brooklyn public housing residents in implementation and policy decisions about environmental cleanup and climate adaptation.

And the collaborative has taken on neighborhood-wide measures like an integrated flood-prevention plan that includes greenways and parks, deployable flood walls, elevated streets, improved drainage and more. It’s also working to deal with the combined sewer overflows and former industrial sites that have long spilled raw sewage and coal tar waste into the Gowanus Canal during heavy rains.

But Turning the Tide recognizes that real resilience is not just about infrastructure and buildings; it’s about people.

While the people of South Brooklyn drew on deep reserves of strength during Sandy, it’s also true that poverty increases vulnerability to climate disaster. To reduce that vulnerability, Turning the Tide is working to lift South Brooklyn’s public housing residents from poverty—by leveraging some $500 million in rebuilding for local workforce development and job creation.

For Karen Blondel, that means focusing on HUD Section 3, which requires that recipients of federal housing dollars (including NYCHA) draw 30 percent of new hires from the low-income communities they serve. Today, it’s a rule that’s mostly honored in the breach; contractors working on public housing projects get around the rule by simply not making any new hires. “Thirty percent of zero is zero,” Blondel observes drily.

So Blondel and other activists pushed for a rule change that requires thirty percent of wages paid to go to local folks—and other measures to make sure public housing residents benefit from recovery spending. They found a champion in Rep. Nydia M. Velázquez (D-NY), who took their concerns to Congress—and continues to press for change.

While they are doing everything they can to fight poverty and build resilience, Corbin, Blondel and their neighbors know that adaptation has its limits. If greenhouse gas emissions are not curbed, and sea levels rise by more than six feet, much of South Brooklyn will be under water. So, Turning the Tide is also working to hold NYCHA – New York City’s single largest landlord – accountable to mitigate climate change by reducing the carbon footprint of New York City’s public housing, as part of a larger effort to reduce the City’s emissions by 80 percent by 2050.

This includes plans to generate power with a “microgrid” that offers mitigation and adaptation benefits. Because it is powered by solar and other renewable energy sources, the microgrid will substantially reduce carbon emissions. And the microgrid can detach from the larger grid in a crisis: that’s how Co-op City, a housing complex in the Bronx, kept the lights on during Superstorm Sandy.

Turning the Tide is helping public housing residents prepare for the next storm—while also making climate disaster less likely. “Sandy laid bare the vulnerabilities that we all knew were present in our communities,” says Michelle de la Uz, Executive Director of the Fifth Avenue Committee. But it also offers opportunities to transform those communities for the better. “By addressing our vulnerabilities collectively,” says de la Uz, “we can ‘turn the tide and create a more just, equitable, sustainable and resilient future for all.”

This post was produced as part of the Island Press Urban Resilience Project, with support from The Kresge Foundation and The JPB Foundation.

2 thoughts on “Getting Real About Resilience in South Brooklyn”