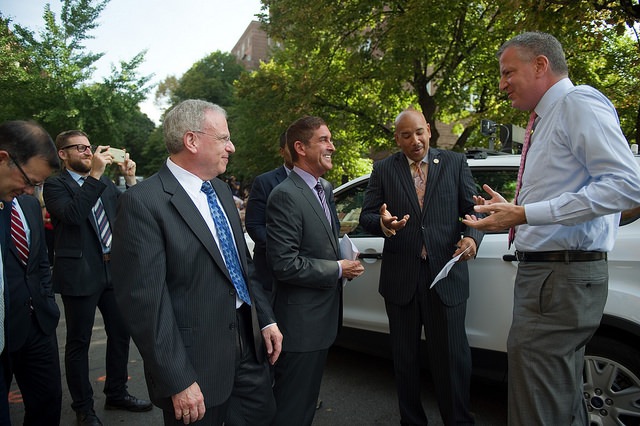 If you live in Sen. Jeff Klein’s district, you’ve probably been seeing a lot of him lately. He’s been spending far more than any other primary candidate for New York State Senate.

Despite the recent splurge, Klein is still left with more campaign money than any legislator running in the state’s primaries, with $1.2 million to spare as of his final pre-primary report.

And in the final weeks before the election, Klein’s high profile in the district has become increasingly hard to ignore, especially for his opponent Oliver Koppell. The former state attorney general, assemblyman and council member has $113,000 in his war-chest—more than many candidates, but far less than his formidable opponent. Klein’s campaign outspent Koppell’s about 10 to one in the last filing.

An air of inevitability

Klein’s leadership role in the Senate and his promises of a new alliance with the Democratic Caucus he broke with to form the Independent Democratic Conference have lent him an air of inevitability. He’s been endorsed by the governor, the mayor and the public advocate. A host of former Koppell allies, other public officials, unions and advocacy groups, including vocal critics of Klein in the past, have rallied around the incumbent.

Klein has been able to raise hundreds of thousands of dollars from real-estate interests and other advocacy groups. And the money continues to roll in. From Aug. 28 to Sept. 5, Klein’s campaign added $40,000 to its reserve. Koppell reported zip. In fact, he recently lent his campaign $50,000.

Klein’s financial advantage has helped him make an impression, as well as an entrance in new parts of his district. Redrawn before the 2012 election to include more of the Bronx, this is the first challenge Klein is facing with the new district lines.

Over the last few years, Klein’s campaign dollars have paid for everything from $1,800 for St. Patrick’s Day Parade cookies, to a $10,000 contribution to Jewish Community Council of Pelham Parkway. Klein has meted out from his coffers $5,000 for a health class sponsorship, thousands in school and youth scholarships, $250 for a Woodlawn Taxpayer Association Spring Festival Block party, $1,500 for sponsorship of a Bangladeshi event, and money for black history, veteran and holiday gatherings.

The campaign recently donated a combined $700 for a Community Pride Day, a block party and a senior trip to Atlantic City. Sponsorships totaling more than $3,000 went toward a Soundview Reunion, an Abrazo Dominicano event and a Shorehaven Homeowners Association’s Family Fun Day — all in the month of July.

Indeed, Klein’s campaign began sprinkling tens of thousands on community organizations and events as early as his July 2013 periodic filing. His campaign also claimed more than $20,000 on food, travel, lodging and flowers in that report, incurring a slew of expenses well over a year before he had an official challenger.

In addition to his deep campaign coffers, Klein—even more than most incumbents, because of his powerful co-leader role in the Senate—has been able to direct public resources to his district. In a recent rundown of state spending directed toward entities in Klein’s district, The Riverdale Press tallied nearly $14 million in grants to schools, parks and senior centers.

Koppell has questioned how Klein is directing all that money despite a ban on Senate member items.

He also says Klein is using a nonprofit barred from political activity to help him spend the state funds for his benefit. Amid Klein’s deluge of spending, Koppell and his allies have chosen to focus on a 20-foot screen purchased with a $100,000 grant secured by Klein for the Kinsbridge-Riverdale-Van Cortlandt Development Corporation, or KRVC.

The screen is being used by the nonprofit to show movies at events co-sponsored by Klein’s office and held throughout his district, even sometimes outside of the organization’s normal operating area. At one such event attended by Koppell in Mount Vernon Aug. 9, the KRVC logo was displayed beside a picture of Mr. Klein, suited and smiling.

After the event, Koppell says he sent a letter, dated Aug. 25, to Attorney General Eric Schneiderman that calls for “an immediate investigation into the political activities” of KRVC, a 501c(3) barred from engaging in any direct or indirect political activity. “The discretionary funds allocated from Senator Klein are used to promote [Klein’s] candidacy” he writes.

KRVC director Tracy McCabe Shelton denies ever knowingly using the organization to help the Klein campaign. “The answer is … absolutely not in an official capacity,” Shelton wrote in a text message. “What candidates do on their own at public events on public spaces is beyond my or anyone’s control.”

Shelton was out stumping for Klein on her own time Sunday.

A campaign spokeswoman for Klein, Candice Giove, says all of Klein’s expenditures are legitimate and accurately reported, and that he is a proud sponsor of events in his district. Klein was willing to spend money, she says, on combating a negative campaign waged by his opponent.

After Koppell complained about the Klein-KRVC relationship, Giove issued a statement calling it “nothing short of desperation from a candidate with no support” who is “taking a cheap shot at a reputable organization, which he funded in the past, and which still features him on its website.”