By Fernando Martínez for El Diario. 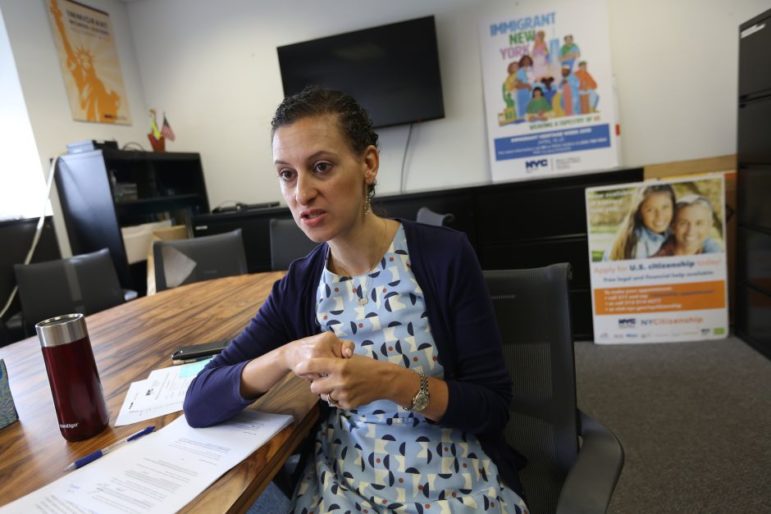 Bitta Mostofi, commissioner for the Mayor’s Office for Immigrant Affairs, says the city will continue to fight implementation of the Public Charge rule.

Read the original story in Spanish at El Diario

City officials and advocates are reaching out to immigrant communities to provide information about the Trump Administration’s pending “public charge” rule. The policy, which could potentially take effect Oct. 15, seeks to make it harder for some immigrants to get their residency permit or a visa if they receive social benefits or are likely to do so in the future.

Still, immigration lawyers agree that the confusion caused by the rule represents a greater risk than the rule itself. Dan Smulian, from the Catholic Charities’ Legal Services Department, encouraged immigrant communities to make the most of available opportunities to obtain confidential advice. He added that it is very important to get “the right guidance, as, in many cases, fear drives people to abandon programs that by definition would have no real impact on their immigration case in the future.”

Smulian believes that, should the rule take effect on Oct. 15, the process of obtaining permanent resident status will become increasingly complicated, as the rule and the new form that comes with it require applicants to submit much more information than the current process does.

“Objectively speaking, factors such as age, health, family size, personal finances, education and professional skills would come into play, which would affect thousands of people who would qualify as what the rule deems as public charge. This will cause many more people to be unable to obtain residency,” he explained.

Bitta Mostofi, Commissioner for the Mayor’s Office for Immigrant Affairs, warned that New York City will continue challenging “this assault to the health and wellbeing of communities” on all possible grounds.

“We are working to train the city’s residents to make the best decisions without necessarily renouncing the benefits they are entitled to. Eligibility for public programs has not changed,” she insisted.

“New York City strongly opposes this wrongful rule and its threat to prevent families to have access to food, health and other social aids,” she added.

It is worth pointing out that this proposal of the U.S. Citizenship and Immigration Services has been met with several lawsuits calling for its annulment in the courts of 18 states.
[optin-monster-shortcode id=”mgdxaus9n1d39gfbzqwj”]

Dr. Mitchell Katz, president of NYC Health + Hospitals, said he feared the pending policy could result in immigrants who refuse to use health services or remain enrolled in health insurance.

“We have already seen a chilling effect in some of our facilities,” he said. The physician stressed that the “public charge” rule does not penalize anyone for receiving medical attention, as the city’s hospital services do not record information on the patients’ immigration status.

“I am worried that, for instance, someone who may have chest pain, a symptom of a heart attack, would be unable to come to an emergency room. I am worried that someone with diabetes would not come to see us when they are in desperate need of insulin,” said Katz.

Grace Bonilla, who leads the City’s Human Resources Administration (HRA), told El Diario that “the latest version of the public charge rule was published two weeks ago. We are now carrying out a new analysis of the figures to see what new impact it is having on communities.”

Bonilla stressed that the rule has not yet come into effect, and that, if it is indeed implemented, “it would not be applied retroactively.” This means that people who are receiving food stamps now would have no reason to believe that they will be affected.

“We must spread the information in a responsible manner, particularly to mixed families, that is, people whose children are U.S. citizens and are benefiting from SNAP. They do not need to think that the measure will affect their immigrant parents’ application process to adjust their status,” said Bonilla.