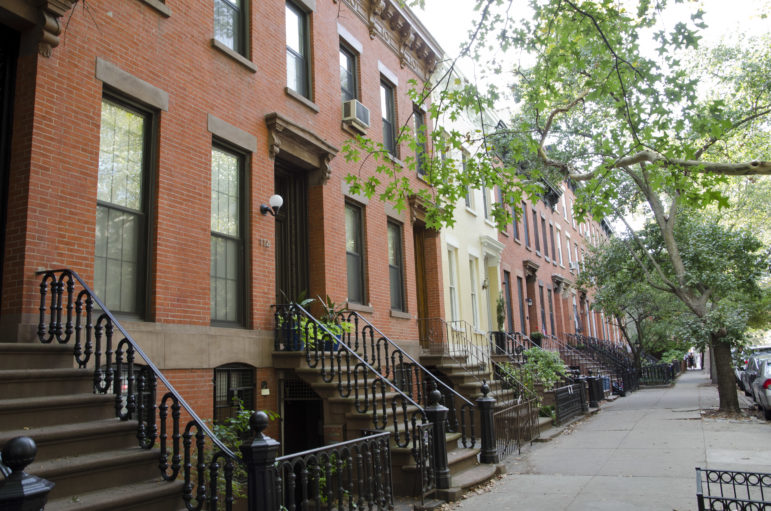 Inside the Boerum Hill historic district.

There’s new evidence in the long-running debate over whether historic landmarks promote or paralyze the development and preservation of affordable housing in New York City.

The take-away from studies released in May by the Landmarks Conservancy and the Historic Districts Council is that historic districts don’t matter very much when it comes to housing affordability, a finding that would refute landmarking opponents who say the designations harm affordability.

Proponents also report new data on the positive economic impact by landmarks and historic districts to industries like tourism.

Landmarking skeptics, however, note other new research that confirms the large footprint historic districts have in Manhattan and the lower level of development in those landmarked areas.

The city has more than 35,000 landmarked properties. Most of them sit in one of the city’s 138 historic districts, but about 1,400 are stand-alone structures, like the Woolworth Building or the Cyclone roller-coaster at Coney Island.

Landmark designation is conferred by the 11-member, mayor-appointed Landmarks Preservation Commission, subject to approval by the City Planning Commission and City Council, with the mayor having the power to veto the Council’s decision. Individual landmark buildings, according to the commission, must be at least 30 years old and possess “a special character or special historical or aesthetic interest or value as part of the development, heritage, or cultural characteristics of the city, state, or nation.” Historic districts are supposed to offer a “distinct sense of space,” adhere to a “coherent streetcscape” and “represent at least one period or style of architecture typical of one or more eras in the city’s history.”

Whether a building is an individual landmark or in a district, the rules are the same: The Landmarks Commission has to approve any alternations or repairs, unless they are ordinary or only on the interior. And unless it’s a “non-significant” building in a historic district, an owner can’t tear it down; even for the non-significant buildings that can be demolished, there’s a requirement that it be replaced by something “appropriate to the character of the historic district.”

Backers of the city’s landmark law, which was famously inspired by the demolition in 1963 of the original Pennsylvania Station, argue that New York City’s culture, identity and tourism industry depend on taking steps to preserve buildings that reflect it history.

But opponents say the city has designated far too many buildings and properties, some of questionable significance, and in so doing choked off development and raised maintenance costs, boosting rents. “If landmarking practices of the previous decade continue, and without a serious look at the rules that govern development in historic districts,” the Real Estate Board of New York (REBNY) has argued, “New York City runs the risk of further inhibiting housing production and preventing the city from meeting the housing needs of its growing population.”

How big an impact?

Whether historic districts help or hurt the preservation and development of affordable housing in New York turns not just on what’s happening in the districts, but how significant those areas—in sum—are in the city’s larger housing market.

Opponents like REBNY emphasize that 27 percent of Manhattan’s land area lies within a historic district, with a few areas posting even higher rates (Upper West Side community district 7, for instance, is 71 percent landmarked). “Large swaths of the city effectively have their development potential curtailed,” REBNY contended in a 2013 report.

Landmarking proponents, however, point out that less than 4 percent of the whole city is in a historic district—leading them to argue that most the city’s housing problems and solutions must be found outside of historic districts. What’s more, the Landmarks Conservancy in its May report contended that historic districts are the most dense areas in their respective boroughs. The implication? That adding significant density to these areas might be ill-advised, even if landmarking rules were relaxed.

“There is little doubt that New York City has to add density and that skyscrapers are one of the ways to do that,” the report reads. “But to scapegoat the neighborhoods that are already the densest in the city is both foolish and bad public policy.”

“One of the reasons that the rezonings are happening is the administration believes we need to be a denser city,” says Peg Breen president of the Landmarks Conservancy. “If you’re looking for density it doesn’t make sense to go where it’s highest. We’re already doing our share.”

The Conservancy also found that historic districts tend to feature more economic activity than other areas, boast good energy efficiency and are critical to the creative and tourism industries—all of which could reflect the heavy concentration of landmarked properties in Manhattan, the city’s economic and tourist center.

A Furman Center report released in March had a slightly different result when it came to density—finding that historic districts tended to have about the same density as their surrounding areas. It also found that between 2004 and 2014, there was far less new construction within historic districts than outside them.

Who lives in landmarks?

What’s more, Furman said the historic zones tend to be wealthier and whiter than the rest of the borough. That matters because opponents of landmarking have sometimes characterized the districts as privileged reserves that are unfairly protected from market forces.

In a statement to City Limits reacting to the new research, REBNY president John Banks said: “The NYU Furman Center’s report affirms key findings from our own recent studies that show the lack of new development in historic districts, the demographic makeup of historic districts, and the fact that landmarked properties comprise nearly one third of all properties in Manhattan. Historic preservation is important to the city’s future. To find the right balance between historic preservation and other policy objectives, we need to be increasingly mindful of the impact of how historic districts, in particular, are designated and maintained.”

The Conservancy acknowledges that there is a racial skew in the districts, but says the effect is strongest in Manhattan, with a much weaker or even opposite impact in the other boroughs.

The most detailed study comes from the Historic Districts Council, which commissioned Think Brooklyn to apply sophisticated statistical analysis to a broader period of time than any of the other research. The finding was that over the 1970-2010 period, historic district designation didn’t really affect rental prices or the number of residents who were “rent burdened,” or paying more than 30 percent of their income in rent.

Rent did rise more in historic districts compared with the rest of the city, but there was no relationship between the relative size of the historic district and the change in rent. Rent burdens increased less inside historical districts than outside them.

When it came to buildings with affordability subsidies, the impact of historic designation was nuanced. “Manhattan’s historic districts are less likely to have maintained affordability subsidies than the city as a whole,” the HDC report found, “but Brooklyn, the Bronx, Queens and Staten Island were more likely to have had a higher percentage of subsidized rental units maintain their subsidies within historic districts than out.”

With 40 areas around the city in the pipeline to be designated as historic districts as the mayor leverages private development to build out his housing plan, the argument between preservationists and the real-estate industry over the impact of landmarking is likely to heat up in the next year. “I think people understand that designation helps protect the character of your neighborhood,” Breen says.