Is Council Speaker Opening the Door to Closing Rikers? 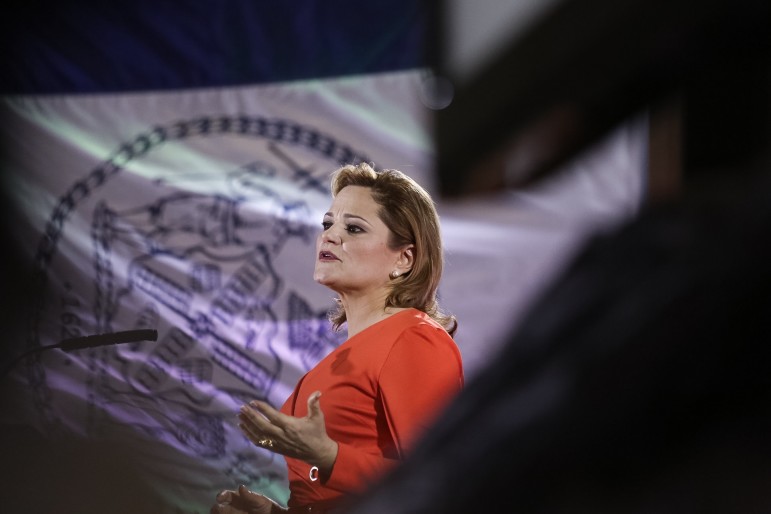 Speaker Melissa Mark-Viverito delivers her 2016 State of the City address.

In her State of the City remarks on Thursday, Council Speaker Melissa Mark-Viverito mentioned Rikers Island 17 times. In one key section, the East Harlem Democrat announced she was launching a panel to develop alternative ways of housing inmates and alluded to a long-term goal of shuttering the island—a prospect that was the focus of the November City Limits/City & State series “Closing Rikers.”

Mark-Viverito did not actually call for the closure of Rikers. In a speech where she dubbed “the young man languishing in Rikers” as part of the foundation of the city, hailed the eight pieces of Rikers reform legislation the Council passed this year and noted that “even a short stay at Rikers can be harmful,” the key passage was this:

Today, I am announcing a new independent Commission, chaired by former Chief Judge Jonathan Lippman, who is here with us today, which will explore a community-based justice model that will complement existing reform efforts. The Commission will create a blueprint for justice for New York City. It will recommend ways to continue to reduce pre-trial detention rates, and assess moving adolescents and those suffering from mental illness off Rikers in the short term. It will also look at utilizing more community courts and borough-based jail facilities.

Rikers Island has come to represent our worst tendencies, and our biggest failures. It is where Kalief Browder suffered and his spirit broke down. For too long, Rikers has stood not for more justice, but for revenge. We must explore how we can get the population of Rikers to be so small that the dream of shutting it down becomes a reality.

In his November series, author Ed Morales reported that the process of shrinking Rikers, home to the bulk of the city jails where pretrial detainees and people serving sentences of a year or less are held, was already underway. That trend took hold a while ago—average daily population in the city’s jails has decreased every year since fiscal 2007—but it is deepening amid de Blasio-era reforms.

Vastly lower numbers of stop-and-frisk encounters and less aggressive drug enforcement have led to fewer arrests and far lower numbers of admissions to the jails. Reforms to the bail system are likely to shrink the population behind bars still further. In the first four mounts of fiscal 2016 (July through October of last year) the city’s average daily jail population slipped below 10,000, a major milestone.

In the autumn, City Limits surveyed the three citywide officials, the five borough presidents and all 51 Councilmembers and found only a handful of city officials willing to call for Rikers to be shut down. Most weren’t willing to say anything at all, although Comptroller Scott Stringer made his views clear soon after our series. The political risks associated with ending the current jail system are considerable: There’s the risk of a crime spike that might be blamed on the policy change, and there’s the likelihood that communities might balk at new or larger correctional facilities in their midst.

The smaller Rikers is, the easier it will be to close because relocating the remaining inmates to borough-based facilities becomes a lighter lift—although still a substantial one.

Alternatively, a smaller Rikers could be easier to run well. If conditions there improve as the inmate numbers dwindle, the calls for dramatic reform could ebb as well. So far, however, Rikers has become only more violent despite the winnowing of its population. Rates of inmate-on-inmate and inmate-on-staff violence, including serious incidents, climbed in fiscal 2015 and the first four months of this fiscal year.