Opinion: Our Rally for Age Justice Calls All Who Support Equality 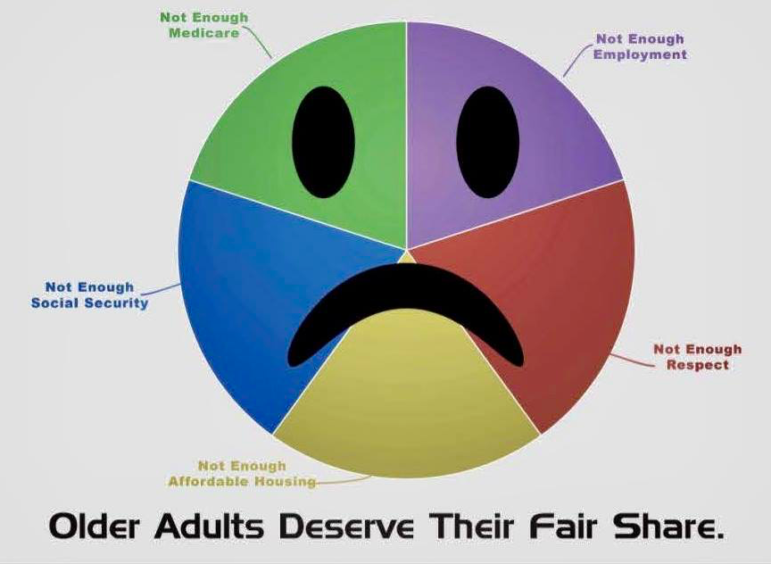 On Thursday, May 23rd, 4:30, the Radical Age Movement (RA), with over 30 partners, will hold the first NYC Age Justice Rally in Union Square.

Older adults are the fastest growing segment of our population. We must turn around the economic and cultural oppression that makes older adults invisible. RA and its rally partners have launched a campaign to change exactly this.

The call for age justice is simple. Today’s marginalized conditions of the old are ignored by economic, political and cultural leaders. For them, ageism, unlike racism or sexism, is powder-puff oppression, landing with the soft caress of casual indifference. Ageism is not yet a recognized form of oppression by most people. For us, committed to age justice, we say enough: We are part of the future, too! Longevity is a success story!

At the rally, we will call out age discrimination in the workplace. Thousands of older workers over age 50 live in quiet desperation, fearful of losing their jobs or unable to find re- employment. As one RA member said, “I used to be middle class, and now I’m on food stamps!” Raise your hand if you know someone who has been a victim of age discrimination in the workplace. It’s time to come out of the shadows about this growing catastrophe! This is institutionalized ageism.

Consider this: Would it be acceptable to ignore racial or gender-based data on hiring, promotion, or attrition? Would an enlightened employer tolerate a joke based on racial, gender or sexual stereotypes? Of course not. This is institutionalized ageism. Earlier, powerful social movements exposed injustice and shifted what is and is not acceptable in workplaces, places of worship, and communities. Age justice activists call upon others to stand up for the inclusion of ageism in their work. Frame your work in part through the lens of age justice.

We are aware that many hard-fought gains for racial groups, women, and others are in danger of being rolled back. It is thus all the more important to stand for age justice, for being older is the one social characteristic that will ultimately unites the vast majority of us. If one is fortunate enough to grow old, it should be the unifying human condition that connects us, not shames us into silence.

We also will raise our voices for enacting the NY Health Act, which includes long term care. Nationally, we need improved Medicare in the call for “Medicare for All”. Medicare doesn’t cover necessities such as vision, dental and hearing care or long term care. Older adults pay thousands of dollars in out of pocket costs. Medical bankruptcy skyrockets after age 65. ACA leaves out long term care. At age 65, you are dropped from the Medicaid expansion. This is institutionalized ageism.

A fair budget for the Department for the Aging is overdue. Although there are 1.6 million New York City residents over age 60, DFTA’s budget stays stuck at one-half of 1 percent of the city’s total spending. We are almost 20 percent of the city’s population and increasingly diverse. About one out of five of us live in poverty with thousands more on the financial cliff. Social Security is inadequate. All this is institutionalized ageism. Can you identify a political leader in New York who stands up for older adults? Few.

It is time for activists to include older adults as part of the diversity of local communities who face oppression. At community meetings there are plenty of older adults. Many of us have been activists for decades. Yet now we are targets of discrimination based on our age. Universal health care, economic security and poverty, workplace justice, women’s rights, supportive community based services – these are social justice issues for all of us across the lifespan.

Generations have been set against each other to compete for resources, convinced someone is getting more than they are: that older workers are taking the jobs of younger workers (not true), that older workers aren’t able to perform well (also not true). Doesn’t this sound like what’s been said at some point about people of color, women and immigrants? Don’t be fooled. The Age Justice rally is a call for the generations to coalesce for social justice and inclusivity.

Age justice can only happen if we build a social movement as strong as others have been in America. It begins by each of us, individually and in our workplaces and communities, making a stand for justice for the old, and no longer accepting the marginality, condescension and indifference of today’s status quo.

Bobbie Sackman is the workplace justice coordinator for the Radical Age Movement.