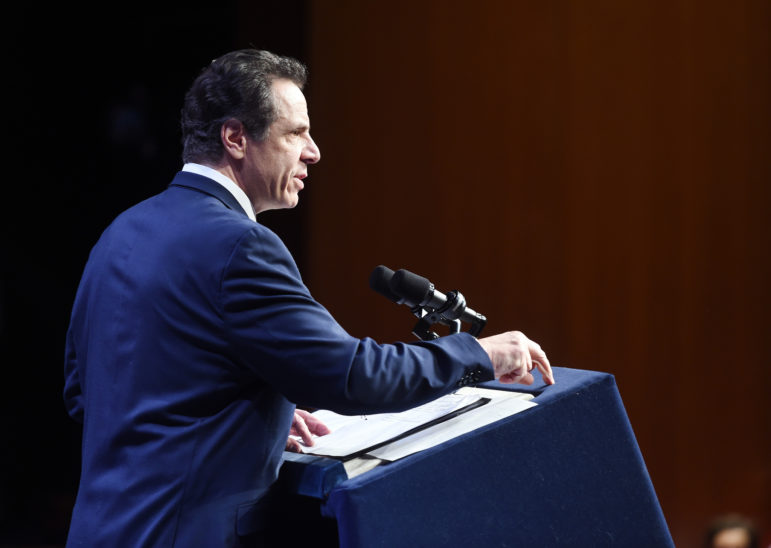 Gov. Cuomo has proposed a licensing regime for student-loan servicing firms for several years. This year, a Democratic Senate that could pass a bill that was revised in line with a recent court decision.

New York City owes $34.8 billion in student loans, a burden born across neighborhoods and demographic groups, but not born equally.

With one in seven New York City residents owing money on student loans and the delinquency rate statewide a third higher in 2015 than a decade earlier, there’s growing alarm at the impact student loan debt could have on communities least able to absorb it. There is also mounting concern that the private firms servicing that debt are only adding to borrowers’ troubles. The U.S. Department of Education’s inspector general found earlier this month that debt-service companies regularly run afoul of rules but rarely face any sanction from federal supervisors.

There’s little hope that the feds will change their pro-lender approach on education finance: Education Secretary Betsy deVos has scaled back U.S. regulations and tried to stop states from filling the gap. In Albany, however, Gov. Cuomo and his Democratic allies in the legislature could soon give New York State the power to crack down on student-debt servicers.

Under a proposal woven into the governor’s budget proposal, the state’s Department of Financial Services would be empowered to license some student-loan servicers—and revoke licenses when “a servicer engages in fraud, intentional misrepresentation, or gross negligence” or when a firm has a significant owner or a worker whose presence in the company “indicates that it is not in the public interest to permit the servicer to continue servicing student loans.”

In a statement, Cuomo’s office said the proposal “will ensure no student loan servicer can mislead a borrower or engage in any predatory act or practice, misapply payments, provide credit reporting agencies with inaccurate information, or any other practices that may harm the borrower.”

This is not the first time the governor has proposed a state licensing scheme for student-debt servicing firms. Last year, legislation mirroring Cuomo’s proposal by Assemblyman Kenneth Zebrowski and State Senator Kevin Thomas passed the Assembly but was blocked in the Republican-controlled Senate. This year, the political landscape is vastly different.

“In the past there has been a lot of pushback by the student-loan industry,” says Evan Denerstein, senior staff attorney for Mobilization for Justice, Inc. “I think the prospects of it passing are better now that there’s Democratic control of the Senate.”

But the legal landscape has also changed. Last fall, a U.S. District Court decision threw out much of the District of Columbia’s new regulations on student-loan servicers because they applied to loans owned by the federal government, which the court said represented a preemption of Congressional authority.

Check out these resources:

With that decision in mind, Cuomo’s current proposal would not require licensing of servicers that only work with federally owned loans. Firms that service private student loans would have to get a license.

The proposed new law would, however, require companies servicing federal loans to register with the state. And it would give the state the right to examine those firms—namely to “investigate the business and examine the books, accounts, records, and files used therein,” have free access “to the offices and places of business, books, accounts, papers, records, files, safes and vaults of all student loan servicers” and be able to “require the attendance of and to examine under oath all persons whose testimony he or she may require relative to such business.”

According to DFS, the proposal would give the agency the power to impose $10,000 fines on those lenders if they violate new regulations that are part of the proposal, including requirements for how servicers handle “nonconforming payments,” how quickly they must respond to inquiries from borrowers and the information they share with credit-rating agencies. The proposal also bans upfront fees.

“The importance of this bill is the state government would have the tools at its disposal to make sure student-loan companies are following the law,” says Seth Frotman, the one-time student loan ombudsman at the federal Consumer Financial Protection Bureau who resigned last summer over Trump administration policies, and launched the independent Student Borrower Protection Bureau. “For far too many borrowers, that’s simply not the case.”

New York would join California, Connecticut, the District of Columbia, Illinois and Washington in creating a state licensing system.

“It is critical that states step up and help protect student-loan borrowers—especially in this moment in time when it’s clear that the federal government has walked away from this fight,” Frotman says. Praising Cuomo’s leadership on the issue, Frotman says the governor’s proposal “has the potential to be a real game charger.” (Frotman also saluted the work of the city’s Department of Consumer Affairs, which has produced a large volume of research on the problem and created tools for borrowers.)

The Student Loan Servicing Alliance, a servicers’ trade group, did not respond to a request for comment on the New York proposal.

While advocates are excited about the law, they’re quick to note that licensing servicers will not solve the student-debt problem on its own. While the law could improve communication between servicers and borrowers, it doesn’t ensure that borrowers are getting the best advice on how to reduce their loan exposure.

“With the federal government under President Trump shielding student loan companies from accountability, it’s good to see Gov. Cuomo and state lawmakers like Assemblyman Kenneth Zebrowski and State Senator Kevin Thomas calling for legislation to regulate loan servicers and establish local oversight and enforcement,” said Jeff Maclin of the Community Service Society of NY (CSS). “But that’s only part of the solution. In addition to tackling the regulatory issues the state needs to address the consequences of abuse in the student loan market. You do that by providing New Yorkers already burdened by student debt with help managing their debt and improving their financial health.”

CSS (a funder of City Limits) has proposed the creation of a Student Loan Consumer Assistance Program that would use community-based organizations to provide information, assistance and even legal advice to people struggling with student debt.

Sen. James Sanders of Queens will hold a hearing on the proposed assistance program on March 4. Sanders seems to think it’s likely to be created, saying in a statement, “While the Trump Administration is aggressively protecting predatory lenders at the expense of borrowers, the State of New York is poised to rein in the loan servicing sector while also helping New Yorkers manage their student loans and avoid decisions that could worsen their financial situation.”

Some have called for even more aggressive action. Ron Kim, a Queens Assemblyman running in Tuesday’s special election for public advocate, has said New York’s leaders should petition private student-loan holders to forgive hefty debts or should purchase the debt themselves, so they can write it down. Barring that, Kim has called for using eminent domain to seize outstanding loans—a controversial and largely untested strategy for a government taking that treats financial assets like real property.

Proponents of the more measured steps proposed by Cuomo and CSS note that there are already programs for loan forgiveness. While imperfect, those programs could help overburdened borrowers if they knew about them. By requiring better communication by servicers and creating new resources for borrowers, as the licensing law and the consumer assistance program would do, the hope is that more consumers would find their way to the help they need.

There are deeper issues at play, of course. The rapid rise in the costs of college and the slow growth in wages put families and students in a squeeze that makes onerous student-loan debt more likely. According to the Office of the State Comptroller, from 2005 to 2015, the cost of college for in-state students at public institutions in New York rose by nearly 55 percent. Private school costs rose nearly as fast.

In a study last year, the Federal Reserve Bank of New York found that student loan delinquency was especially prominent in the Bronx, where 19 percent of loans are delinquent and median loan balances are equal to 43 percent of median income.

One thought on “As Feds Turn Away, New York Looks to Regulate Student-Loan Servicers”