By Matt Gonzales and David Tipson. 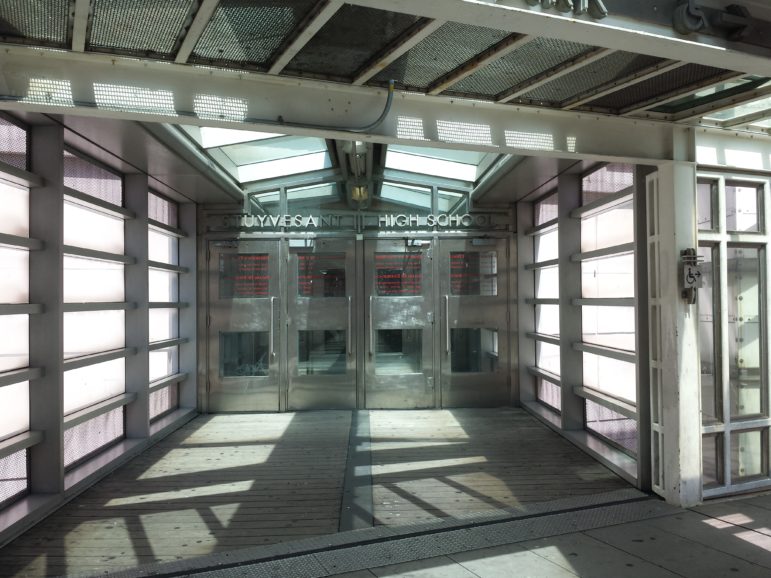 Getting through these doors depends on what door students walked through two or three years earlier.

For seven months now Mayor Bill de Blasio’s plan to tweak admissions at New York City’s specialized high schools has fueled an acrimonious debate that has elevated some of the most divisive and pessimistic perspectives against diversity. As advocates for integrated schools, we are of course generally supportive of any effort to make these schools more representative of our city and agree that the underrepresentation of Black and Latinx students is an embarrassment.

But tweaking admissions requirements to these eight schools is only a small part of a total solution: the specialized high schools — indeed all of our public high schools — will not become integrated until all children enjoy equal access to educational opportunity before high school.

Fourteen of the 15 middle-schools with the highest numbers of students receiving specialized-high-school admission offers —representing over 1600 students with offers in total – are not fully open to all students.

It is time to open our public middle schools to the public.

As detailed in a new briefing by New York Appleseed, middle schools depend far less on geographic zoning than is commonly understood. Data from the 2018 middle-school directories show that only 17 percent of New York City’s public middle schools are zoned.

Compounding the inherently segregative effects of school choice are the even more pernicious policies of academic and behavior “screening” allowingmiddle schools to judge the worthiness of individual students and admit or reject them accordingly. Such judgments about students’ suitability are necessarily based on their educational attainment and behavior during the first nine years of their lives.

Trying to make competitive admissions to middle school “fair” will not be successful. First, previous efforts along these lines have failed because the unfairness of these policies derives from larger systemic and historical inequalities. Neither “objective” nor “subjective” assessments can be responsibly separated from our city and nation’s terrible history and current reality of racial hierarchy. A system of student assignment can either acknowledge these realities or pretend that they do not exist, and for too long the City’s policy has been the latter.

Second, as a political matter, we do not believe that affluent and highly educated parents will ever consent to maintaining a binary system of winner and loser schools in which their own children are not reasonably certain of winning—the inevitable result of a truly “fair” system of competitive admissions.

Finally, even if these other realities were not present, recent actions by the Trump administration strongly suggest that attempts to increase representation of African American and Latinx students at schools with competitive admissions processes could invite investigation from the U.S. Departments of Education and Justice. It is safer just to eliminate competitive processes wherever possible.

Apologists for the Specialized High School Admissions Test (SHSAT) have made similar arguments, many of which strike us as disingenuous. We hope we are wrong, and we invite defenders of the SHSAT to stand with us in calling for an end to competitive admission to public middle schools.

Removing competitive admission is hardly radical; it is simply bringing our middle schools into alignment with nearly all other public middle schools in the nation —not to mention charter schools in New York City. Nor is it politically impossible: this past fall Brooklyn’s affluent Community School District 15 removed screens from all of its middle schools – including one of the 14 schools mentioned above. Mayor de Blasio praised the community members who developed the plan for their vision:

“They did not say let’s have diversity, but schools in which kids can’t succeed. And they did not say let’s have schools in which some kids succeed and other kids don’t succeed. They said we need a common standard of schools where every child succeeds and kids learn together with children of all backgrounds. That’s what equity and excellence is all about.”

If we are going to maintain high schools that judge students’ “merit” and apportion educational opportunity accordingly, then it is our moral responsibility to level the playing field. The time has come to follow District 15’s leadership and remove all academic and behavior screens from all middle schools in New York City.

3 thoughts on “CityViews: Equitable Admission to High Schools Must Start with Middle School”