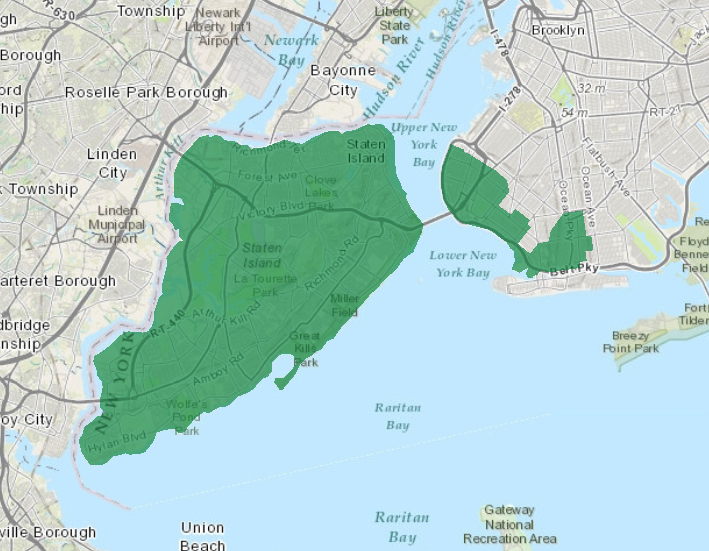 Since 1978, when Democrat John Murphy won the last of his nine terms in Congress, the 11th district has gone Republican in every Congressional election save one.

The much-covered matchup in Tuesday’s Congressional primaries between Republican rivals Rep. Dan Donovan and Michael Grimm has generated a lot of media attention, what with Grimm’s having served a federal prison term and the role that allegiance to President Trump appears to be playing in the race.

But the 11th district, which contains Staten Island, Bath Beach, Dyker Heights, Gravesend, and some of Bensonhurst and Bay Ridge, is only of six where New York City voters face primary choices this week.

And even in the 11th district, there is another contest that’s received less attention: the Democratic primary for the right face Grimm or Donovan in November. Among the Democrats, only Max Rose–the pick of national Democratic operatives trying to shift seats from red to blue–has spent any time in the spotlight.

Rose, a former director of engagement and special assistant for late Brooklyn District Attorney Ken Thompson, appears to be the favorite. A veteran of the war in Afghanistan who has not been subtle about touting his military service (his campaign logo looks strikingly similar to the U.S. Army star), he has been endorsed by several groups including The Staten Island Democratic Party, the Working Families Party, the Women’s Equality Party, and Young Brooklyn Democrats.

Out of all the potential Democratic nominees, Rose has raised the most money. As of this June has raised over $1.5 million according to data on Open Secrets. Less than a quarter of his money came from individual contributions attributed to Staten Island or Brooklyn. Rose grew up in Bay Ridge and moved back to the district after he finished active duty.

DeVito has recently begun getting more attention despite only having raised a little under $45,000, a large portion of it being from miscellaneous businesses. He’s a Marine veteran who has worked with at risk students and children from immigrant backgrounds for over a decade as a teacher in Staten Island and has raised more than half of his campaign funds inside of the district, according to a report from SI Live.

He was recently endorsed by Justice Democrats, a group that supports candidates that do not accept campaign donations from corporate PACs or corporate lobbyists. Despite not having the same level of funding as Rose and his potential Republican opponents, DeVito thinks not receiving money from corporate donors is a virtue. He’s dedicated his campaign to discussing better infrastructure for Staten Island, Medicare for all, and living wages for working class families in his district.

“I’m being transparent. I’m not going to owe anyone other than the people of this district,” he said. “We’ll be making decisions together.”

Prop and set decoration maker Omar Vaid has worked on all sorts of Made in NY TV and film productions. He’s an active member of IATSE Local 52, a union for production workers like set electricians, prop makers, and other movie set workers. He’s been endorsed by a variety of unions like by several IATSE chapters, Teamsters local 817 and USA Local 829.

As of this June he’s raised over $193,000 to fund his campaign, but Vaid also took out a loan of over $105,000 last September. He’s advocating for stronger unions and better infrastructure for his district, and he wants storm walls for New York to reduce the impact of climate-change-related incidents like flooding along the coast.

Zach Emig, a bonds trader and former computer programmer, has raised a little under $50,000 as of this June for for his campaign and took out a loan for $5,000 last year. . He said that one of his priorities if he were to be elected would be to have President Trump removed from office. He believes that not being a traditional Democrat or lifelong politician makes it easier for him to be brash about his dislike for the current president.

Hopeful Michael DeCillis, a former NYPD officer took out a loan of $17,000. He has a section on his campaign website describing how he thinks community policing is important.

“The goal is crime reduction, and an increased quality of life, while respecting the rights of residents who live and work in our diverse district,” it said on his site.

Mohan was born in India and came to the United States in 1989. He considers himself an “immigrant’s success story.” Vaid is a first generation American who has two immigrant parents. DeVito says he has worked closely with immigrant students and DREAMers and was once almost deported from Japan: He had quit a job and was told that losing employment was enough to have him removed from the country. His daughter was born in Japan and he says he was terrified of being separated from her. “I was given a notice that I had 30 days to leave the country and I was just trying to be a parent to my child,” he said. “I know it doesn’t compare remotely to what immigrants deal with… I’ve had a taste of that disregard.”

This prompted him to recently ask Donovan for a meeting to discuss children being separated from their parents at the country’s southern border. In a video posted to his official Twitter account, DeVito is seen calling Donovan’s office and asking for him to tell Trump to stop separating families.

Vaid recently called out Grimm on social media for saying that crying children being separated from their parents by ICE at the border sound just like children being dropped off at nursery school.

“I demand @RealMGrimm step aside for betraying American values. We must block felons like Grimm from destroying families on the border, or here at home,” he Tweeted.

Emig has two children who are immigrants from Asia and said it took four years and a lot of his resources to complete their citizenship process, which he says is nothing compared to people who have to wait over a decade for their citizenship. He sees the uptick in immigrant communities as a way to help grow Staten Island’s and South Brooklyn’s economy.

“They cover the entire gamut from the guy at an entry level job in a the mall, to small business owners to pastors. It’s really hard to separate them out from the fabric of this district,” he said.

The 11th district actually has far more Democrats than Republicans (46 percent of registered voters versus 27 percent), though the Republican rolls have grown twice as fast in the past two years. However, party labels have only counted for so much in the area: Since 1978, when Democrat John Murphy won the last of his nine terms in Congress, the district has gone Republican in every Congressional election save one.