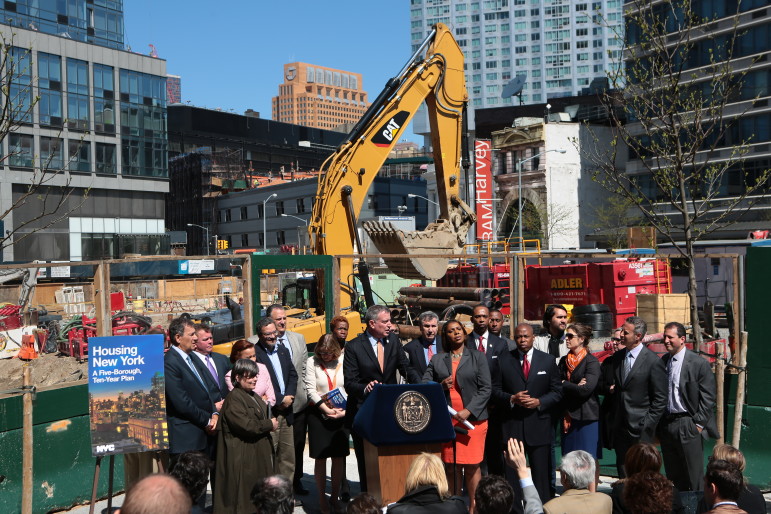 Ed Reed for the Office of Mayor Bill de Blasio

In a city with skyrocketing rents, homeownership can seem like the ultimate prize, a guard against displacement and a fast way to accrue wealth. Yet New York continues to be a city of renters: Only 31 percent of city households own homes, as opposed to 64 percent nationwide—and no city-sponsored policy is about to make that change.

For all the allure of homeownership, Mayor de Blasio gives it a backseat in his 10-year affordable housing plan. According to Commissioner Vicki Been of the Department of Housing, Preservation and Development (HPD), of the 200,000 affordable units that the administration plans to create or preserve, only 5 percent, or 10,000 units, involve homeownership units. It comes down to a “cost-benefit” analysis, she says, about how to get the most bang for the subsidy buck.

This amounts to a large shift from the policies of previous administrations. For decades, programs created by former Mayor Edward Koch subsidized the creation and rehabilitation of tens of thousands of single-family homes. Mayor Bloomberg’s housing plan also placed a significant emphasis on homeownership: the administration created or preserved 160,787 units—44,092 of them for homeownership.

The recession, however, began to change the city’s priorities, says Mark Willis, senior policy fellow at the Furman Center. “The price of housing had fallen and…it was much harder for people to get mortgages,” he says.

The de Blasio administration is also concerned about investing in programs that could result in a windfall for one family without larger community benefits. What limited investment it does make in homeownership will be designed to also serve broader, public goals, such as addressing blight and stabilizing neighborhoods. HPD intends to continue the conversion of city properties to tenant cooperatives through its Tenant Interim Lease Program (TIL) and Affordable Housing Neighborhood Cooperative Program (ANCP), and has launched the New Infill Homeownership Opportunities program (NIHOP), which will fill scattered vacant lots with new small family homes for low- and moderate-income families.

“I don’t want it to sound like we’re against homeownership…but it has to be done carefully because we don’t have the resources,” says Been, adding that there have been “lots of problems with the homeownership model” that make it difficult to execute.

Take the TIL Program, for instance. Many cooperative-owners did not receive sufficient training on building maintenance, causing buildings to fall into states of disrepair or tax delinquency. In addition, TIL units are frequently resold at high prices—good for the cooperative and original owner, but reducing the city’s affordable housing stock.

HPD created ANCP to address many of TIL’s problems: Under the new program, coop owners must abide by price caps if they choose to resell, and the cooperative must submit financial reports to HPD, among other new rules. But those reforms haven’t addressed all the agency’s misgivings about a focus on homeownership.

Not everyone agrees with the city’s shift in focus away from affordable homeownership. George McCarthy of the Lincoln Institute of Land Policy says that while it’s true that a lack of permanent affordability and a tendency toward poor stewardship have afflicted the city’s homeownership programs in the past, those issues are problems for rental programs too. To McCarthy, the answer is investing in homeownership programs, such as limited equity cooperatives and community land trusts, that tie the subsidy to the unit, rather than providing one-offs for individual households.

“The question is not rental versus homeownership,” he says. “It’s ‘how do we make the best use of public subsidy?'”