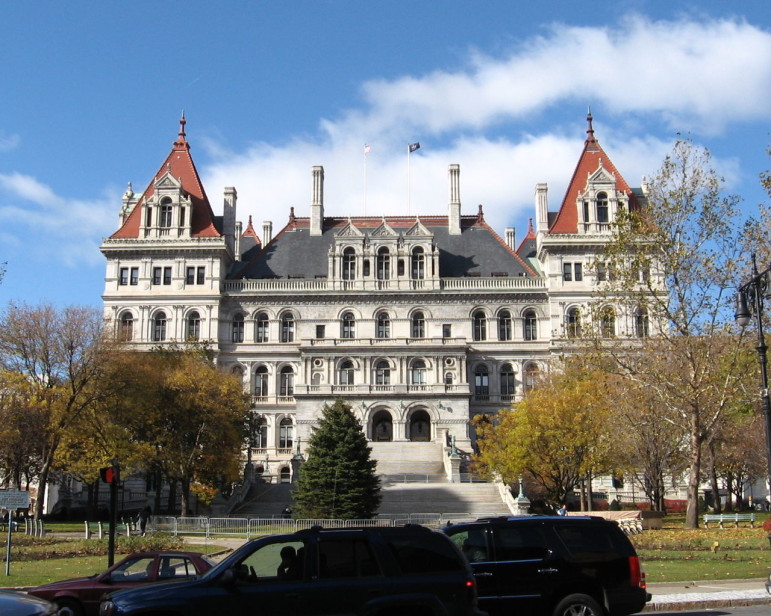 The state capitol in Albany. he first rally of its kind in almost a decade brought 800 people on 18 buses there this week.

Public housing residents and members from Community Voices Heard Power Inc. (CVH Power), Real Affordability For All, and Community Service Society traveled on buses from New York City to the rally, the first of its kind in nearly a decade, where they demanded that Governor Cuomo and state lawmakers commit to investing $1.2 billion in public housing over the next 10 years, or $120 million per year. This year’s budget only calls for $25 million in capital funds for NYCHA.

The rally came on the heels of an investigative report issued in February by the offices of Senator Klein and Councilman Torres revealing deplorable conditions in NYCHA buildings. The report: titled “Worst Landlord in NYC?” documents a series of infractions and deteriorating conditions in five NYCHA buildings, ranging from fire exits with no easy access, dark and exposed hallways and debris from recent fires. The report can be found here.

Over the last 15 years, New York City residents of public housing have seen their living conditions rapidly deteriorate as a result of inadequate funding from federal, city and state governments. Buildings have fallen into extreme disrepair and residents have been forced to live in unsafe and crumbling apartments.

“I work, I pay taxes and I believe I deserve to live in housing that is safe, clean, affordable and livable. I do not expect the federal government with its dysfunctional Congress to provide more funding for public housing, but I do expect the City and the State to ensure decent housing for the residents of its public housing,” said Vernell Robinson a NYCHA resident and Community Voices Heard Power leader from Carleton Manor Houses in The Rockaways, Queens.

“We are here today as taxpayers demanding our dollars’ worth of taxes that we as NYCHA residents pay.  NYCHA has been severely underfunded and abandoned by the federal government.  In order for NYC to keep its last source of affordable housing, the city and state have to act now,” said Aixa Torres, Tenant Association President of Smith Houses, Lower East Side.

“I feel it’s very important that our government fund our housing developments, especially around the maintenance and needed repairs of our decaying buildings. We are fighting for us and for our future generations that depend on the last affordable housing left in this country. We are praying for a change,” said Lucille White resident of Sedgwick houses Bronx.

“Public housing is crumbling. Public Housing is essential Infrastructure. The State of New York has a duty and obligation to restore and repair the buildings, now, and invest the same money as it does in transportation, power and water. The Citywide Council of Presidents of NYCHA is calling on the Governor and NYS Legislature to restore $1 Billion in Capital Funding for Public Housing in New York”, said R. H. Bowman, President of NYCHA CCOP.

“NYCHA residents live in deteriorating and unsafe buildings where conditions like mold, broken fire doors, leaking roofs, and falling plaster ceilings consistently plague developments in all five boroughs. The deplorable state of these developments leaves one thinking that NYCHA is the city’s ‘worst landlord.’ I’m proud that the State Senate’s one-house budget resolution recognized my call to invest in NYCHA with oversight and also offer developers an incentive to do expeditious repairs in exchange for a zoning bonus. Standing here with hundreds of NYCHA tenants and organizers, our voices will be heard: funding NYCHA, the city’s largest affordable housing stock, is a wise and necessary investment,” said State Senator Coalition Co-Leader Klein.

“We cannot allow NYCHA residents to live in deplorable conditions. The State Senate realized the state of crisis our NYCHA tenants face. It’s time that the State invest in NYCHA so that the thousands of families who reside in these buildings could enjoy safe, clean buildings where repairs are made in a timely manner,” said State Senator Diane Savino.

“Public housing residents have suffered deteriorating living conditions for too long. It’s time for the State to reverse the decline of our most precious affordable housing stock. I am proud to stand with residents, Senator Klein, and all of the state elected officials calling on Albany to reinvest in public housing,” said Councilmember Ritchie Torres, Chair of the Committee on Public Housing.

“More than 400,000 New Yorkers live in NYCHA housing, the State cannot continue to stand back and watch as the Agency’s buildings deteriorate” said State Senator Adriano Espaillat (D-Manhattan/Bronx) Ranking Democratic member on the Senate’s Housing Committee. “The State must come off the sidelines and work with the City to reinvest in NYCHA, and make sure the investment goes to making the critical repairs that are desperately needed”.

“In 1998, New York State turned its back on NYCHA’s 15 state-financed developments, generating a cumulative operating loss of nearly $1billion by 2010. Its savings were passed on as costs to residents who faced accelerating deterioration. The State was a large part of NYCHA’s financial problems. Now it has to be a large part of the solution,” said Victor Bach, Housing Policy Analyst, Community Service Society.

“Public housing residents have the same basic rights as any other resident which is the right to live in conditions that maintain our dignity as humans. Thank you to all who came out to support this fight to get adequate funding for public housing,” said Shatia Strother a community organizer from FUREE.

One thought on “Hundreds of NYCHA Residents Rallied in Albany”