By Alexandra Cox and Jane Spinak. 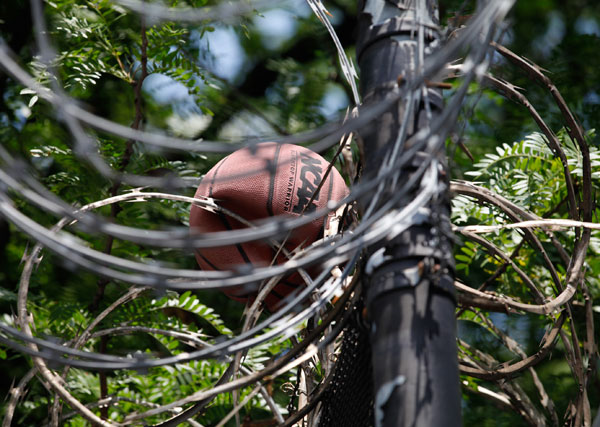 The scene outside the Bridges or Spofford Detention Center in the South Bronx in the summer of 2010, before it was shut down the following year.

In recent months, countless stories about the brutality that teenagers experience on Rikers Island have been written. We’ve read about broken bones and limbs, repeated headshots, bloodied faces, suicide and death in solitary confinement. The scathing report issued by the United States Department of Justice in August chronicled their abandonment by the institutions responsible for protecting them. This is the second time in less than a decade that the Department of Justice has investigated the horrific treatment of teenagers in custody in our state. In 2009, a similar report described excessive force in upstate juvenile facilities including spiral fractures and knocked out teeth. One lesson we draw from these tragedies is the importance of an independent oversight board whenever children and teenagers find themselves in government confinement. We cannot wait for periodic federal government investigations to protect children and teenagers from potential mistreatment and violence.

Rikers Island isn’t the only place where teenagers accused of crimes are held in New York City. The New York City Administration for Children’s Services (ACS) oversees juvenile detention facilities spread throughout the boroughs. ACS also shares responsibility with the State Office of Child and Family Services (OCFS) for youth initially confined by the Family Court when they are fifteen or younger. One result of the 2009 federal investigation into the dangers of the OCFS upstate juvenile facilities included a plan for New York City youth to be confined after trial in limited or non-secure facilities in the city instead of upstate far from their homes. This “Close to Home” plan is now in its initial stages. Family Court judges still retain authority to confine youth in locked facilities upstate: the same facilities that triggered the federal investigation.

We believe that there is an urgent need for an independent body of citizens who have the power to oversee and monitor all the facilities in New York City that house young people accused or found guilty of breaking the law. Our concerns are not just about potential violence against them. These youth are all too often the throwaway kids—the ones that no school, foster care agency, mental health or drug treatment facility wants. Yet while in state custody they need to be educated, treated for physical and mental illnesses, and taught skills that will improve their chances of integrating well into society when they return to their families and communities as older adolescents and young adults. How can we be assured that this is happening? We believe that it is impossible for that accountability to come solely from within the confining agency.

ACS and OCFS have several internal oversight bodies responsible for youth in confinement. An internal oversight authority cannot make unannounced inspections of facilities, speak with youth and staff in strict confidence, report its findings to an agency separate and apart from the agency it is holding accountable, or make information readily available to the public. As an attorney and a social worker who have represented young people accused of crimes, who have gone inside many of New York’s facilities and who have spoken to our clients about their experiences in confinement, we know that the words they shared with us are ones which they do not feel comfortable sharing with “oversight” representatives from the agency responsible for their confinement. And internal oversight procedures all too often carve out room for minor complaints as opposed to systemic critiques.

Our recommendation for an independent juvenile justice oversight board in New York City is consistent with Mayor de Blasio’s call for a “culture change” on Rikers Island and with some recent actions, including eliminating solitary confinement for inmates under 21. Independent oversight and monitoring of the city’s youngest inmates will protect their safety, improve their lives, and help ensure that no mayor will have to hold a press conference to express regret, as the Mayor did in December, that the youth leaving the city’s facilities “were more broken than when they came in.”