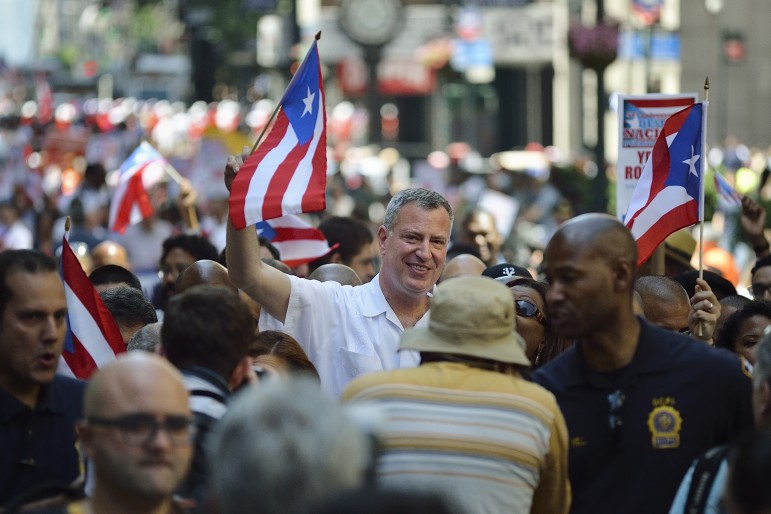 Diana Robinson for the Office of Mayor Bill de Blasio

Angelo Falcón, longtime head of the National Institute for Policy, has a deserved reputation for his relentlessly acerbic wit, but last month, addressing a meeting of the newly formed Fair Representation for Latinos campaign, he looked weary and exasperated. He was trying to rally the troops—a turnout of around 50 leaders in education, activism, government and the private sector–behind his stat-driven analysis, which he asserted to be proof of a flaw in Mayor Bill de Blasio’s new progressivism: the failure to be inclusive enough of Latinos.

“Right away he hired Lilian Barrios-Paoli, Schools Chancellor Fariña and Gladys Carrión,” said Falcón. “At the time it was 26 percent of the appointees, but those were the ones that were publicly announced. We asked for the full list and they wouldn’t provide it. By September it was down to 12 percent. We’ve made specific recommendations but they won’t engage with us directly. Instead we get this progressive trickle-down argument: ‘Look, what are you people complaining about? We have all these great policies like minimum wage, municipal ID cards, this stuff that’s benefiting your community. Why are you bringing this up?'”

Falcón’s statistical revelations are numerous and significant. Given that Latinos represent 29 percent of the city’s population, the 12 percent of all mayoral appointments, combined with the fact that Latinos are 20 percent of the full municipal work force, make Latinos “the most underrepresented group.” Furthermore, Latinos tend to be concentrated in three of the city’s 39 agencies, there are no Latino appointees at all in a majority of city agencies and although 23 agencies have predominantly white staffs, and 17 have predominantly black staffs, none have a predominantly Latino staff.

Despite this apparent call for parity based on population figures, Falcón and the campaign insist that “we’re not talking about quotas—we just want meaningful Latino representation.”

“Latinos in the mayor’s transition committee have expressed their frustration [over their role in the administration]with us,” said Anthony Miranda of the Latino Officers Association and part of the core of the Fair Latino Representation campaign. “Even people on the inside are saying they feel left out.”

To be fair, the de Blasio administration, which did not respond to requests for comment, is still rolling out various aspects of its agenda and goals, and is under enormous pressure to address much of the fallout of 20 consecutive years of Republican mayoral administrations. They are clearly pursuing policies considerably to the left of their predecessors, many of whose appointees are still lurking in various agencies.

But, as Lucía Gómez, president of the civic-participation advocacy group La Fuente, insists, “This is a long-term issue that predates this administration. Inclusion can be a pipeline where people are able to learn city government so they can help people not just from the Latino community but people from a similar demographic. We can’t expect future appointments without a clear understanding of how government works, and we need opportunity to do this from the inside.”

The campaign may have some echoes of the experiences of ethnic groups that rose to power in the middle of the last century. “I see some parallels between the Italian-American story and the Latino story,” says Paul Moses, a Brooklyn College professor whose book An Unlikely Union: The Love-Hate Story of New York’s Irish and Italians will be published in June 2015. “These kinds of appointments are of important symbolic value to emerging ethnic communities. If you look at the Italian newspapers you see a great deal of attention given to the appointments of judges, even assistant district attorneys. Even though the Council speaker, for instance, is of Latino origin, appointments have a practical impact because they may know people in the community and have an easier working relationship with people they feel a connection to.”

Some campaign members have stressed the bigger picture, trying to avoid being accused of jockeying for a position in the administration. Longtime union activist and founding Young Lords member Miguel Meléndez makes it clear he doesn’t want to “participate in anything that looks like a job fair.”

“The long-term issue is policy—an agenda that identifies our issues and establishes a mechanism that holds institutions and the public sector accountable,” Melendez says. “What you really want to get some people at is middle-level management where the policy is developed and implemented.”

According to the campaign, one of the featured policy initiatives of the de Blasio administration—the new ID for undocumented immigrants—seems to play to the new stereotype that Latinos are mainly concerned with immigrants rights. But the administration’s support for paid sick leave for city workers, its stance—however ambivalent in its implementation—on stop-and-frisk policies and funding of universal pre-K could be said to benefit Latinos as much if not more than other constituencies.

Yet Falcón’s campaign feels those initiatives only scratch the surface, and that deeper systematic change is needed. “Only 14 percent of the city’s public school teachers are Latinos and we make up 40 percent of the students,” said Meléndez. “[The Community Service Society] came out with a report about public housing that said that if NYCHA were folded into the Department of Buildings and used their standards, 37 percent of NYCHA houses would be condemned. What is the impact of that on our community?”

While the campaign says it is trying to recruit several elected officials for support, no one outside the Fair Latino Representation campaign seems to want to weigh in on the topic. For this article City Limits contacted representatives of the mayor, Speaker Melissa Mark-Viverito, Bronx Borough President Rubén Díaz, Jr., labor-union leaders, the Hispanic Federation and even the Working Families Party. The lack of response seems troubling, indicative of a reluctance to engage in any form of auto-critique.

Following the campaign’s rain-swept press conference on the City Hall steps last Monday, the administration released a statement that it was “committed to increasing the representation of Latinos, African-Americans, and Asian American and Pacific Islanders across the administration,” and that it has increased the number of agency heads and appointments across the board vis a vis the Bloomberg administration.

“We have been very clear in our intention to build an administration that is representative of all New Yorkers and we are proud of the diverse team that we have built to date,” the statement continued. “There is always more we can do to increase diversity, and we won’t stop until we ensure that progress continues to be made.”

“Mark-Viverito should be on top of this, done her own study by now,” says Meléndez. “The comptroller’s office should have done a study. A lot of the new city council members are just new to the game.”

There may be a perception that the Latino community was not particularly key in delivering de Blasio’s victory, even if 87 percent voted for him. CUNY’s Center for Urban Research director John Mollenkopf points out that in the 2013 primary race, most Latino elected officials lined up behind de Blasio’s primary rival Bill Thompson. On Primary Day, “de Blasio got slightly more votes from predominantly Puerto Rican EDs [Election Districts] than Thompson (32,000 to 25,000) as well as in Dominican EDs (21,000 to 18,000) so they contributed 10,000 of the 101,000 vote margin that de Blasio stacked up,” Mollenkopf says.

The only elected official whose said much at all on the subject was Assemblyman Felix Ortiz, who is the chairman of the state legislature’s Puerto Rican/Hispanic task force, and his comment in the New York Post was to give the administration time because the mayor was moving in the right direction. Speaking with dna.info, City Councilmen Ritchie Torres and Ydanis Rodríguez simply pointed to de Blasio appointments like Fariña, Barrios-Paoli, and Administration for Children’s Services Commissioner Gladys Carrión.

One of the few overt acts by an elected official to address the issue of Latino representation of government was a letter written by Brooklyn Councilmember Antonio Reynoso, who urged Police Chief Bill Bratton to replace deputy commissioner Rafael Piñeiro, who, according to Miranda, was “pushed out.”

The subsequent controversy over the departure of NYPD chief Phillip Banks heightened concerns in the black community, buttressing Miranda’s point. “When we talk about the everyday interactions that these cops are having and who they are having them with—young men of color, black and Latino for us not to have a voice at the top, specifically speaking on issues of sensitivity and identifying with the people that they are interacting with, that’s a huge concern,” Reynoso’s letter stated.

The campaign for Fair Latino representation also brings up some long-standing issues related to how Latinos fit into the fabric of New York politics in general. Letitia James and John Liu have both been outspoken on the need for diversity in hires and appointments, and the question remains whether intra-minority tensions could be stoked by a series of concurrent grievances. Moses points out that while Mayor Giuliani had an abysmal relationship with the black community, he was “very consciously trying to add Latinos, because of [President] Reagan’s belief that Latinos were conservative at heart.”

There’s also the question of how the campaign handles differences between different Latino ethnic constituencies. While there was a small Mexican contingent at Falcón’s planning meeting, there was a notable absence of representatives from the ascendant Dominican community. “I was discouraged by the fact there were few Dominicans in the room,” said Falcón afterwards. “We hope these efforts bring about something broader that brings people together to look at municipal policies that affect the Latino community. We don’t really have a citywide Latino organization.”

Falcón and the campaign also intend to expand their efforts to pressure newly re-elected Gov. Cuomo and the Albany Democrats. “The state numbers are much worse,” he noted. “We’re also seeing the same kind of grievances raised by Latino leaders on a national level and the shortcomings of the Obama administration on many of the same issues we’re raising.”

Gómez feels that while de Blasio’s new progressivism has yielded salient benefits, the goal should be to continue to expand their length and breadth. “We have seen positive changes like paid sick leave, the municipal ID discussion,” she said. “But that should not mean that we shouldn’t see appointments–not just as parity in terms of population numbers, but giving the community an opportunity to represent, to keep our voice at the table all the time.”